More on Agnes the Barbarian 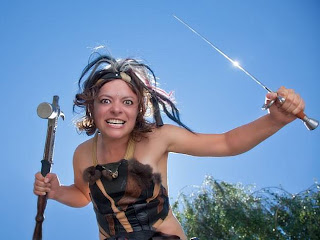 Lookie here!  As an update on the last Agnes post, which was graced with the presence of Jaime Lee Currier, the actress portraying the Heir of Conan herself, an anonymous tipster pointed out a post on SFChronicle.

Jason Harding's new play, "Agnes the Barbarian," has caught the eye of Robert E. Howard fans who are concerned that the piece will be another bad parody of the sword and sorcery genre.

Harding assures them that it's not. He says he's a huge fan of the genre and stands by the theory that "you can't do a successful satire unless you love the thing you're making fun of."

This is pretty much what Jason said to me in his email, however, he extrapolates further on his inspiration for the play here:

Harding came up with the idea for the play after watching the 1982 "Conan the Barbarian" film starring Arnold Schwarzenegger. He began wondering why Conan would be so troubled after winning the kingdom of Aquilonia.

Well, Harding thought, it's probably because he's having trouble with his kids. Naturally.

"This is not a play I would have written before I had children," said Harding, who has two daughters, both 11, and a son, 16. "It's basically using the fantasy world to dramatize an interpersonal family drama between Conan and his daughter."

Thus, "Agnes the Barbarian" was born.

That explains quite a lot... Ah, writers.

Agnes is a bookworm who hates wearing skimpy clothing. She'd rather talk through arguments than win them with her fists. Her favorite place is the Aquilonia library, which her father has threatened to burn down.

*sharp intake of breath* Yikes.  Not very "patron of the arts," this version of Conan.  Though I suppose it could always have been made in jest.  I hope.  (Calm down, Al, it's an Elseworlds parody, not a documentary)

Agnes encounters a variety of characters along the way, but instead of slaying them as a true barbarian would, she counsels, befriends and recruits them. For example, Agnes meets an evil sorceress who is going through a bad breakup with a well-known evil magician (Harding won't say which one), and she ends up lending the heartbroken villain a shoulder to cry on.

Very Pratchett-ish.  Hmm, the barbarian hero choosing not to slay the monster, but to comfort and listen to it as it tells its sad story amid tears?  Why does that sound so familiar...  (Remember, it's a parody of Sword-and-Sorcery in general, not necessarily Conan in and of himself, deep breaths, deep breaths)
Let speculation on the identity of this well-known evil magician begin! My guess is Thoth-Amon, or if Harding's going for the populist vote, Thulsa Doom or maybe someone out of the Conan universe like Saruman.  Or maybe he'll throw one way out of left field, like Gargamel.  Hmm.

"Agnes is a very understandable character, maybe not lovable at first because she is a teenager and she's fighting so hard with her parents," Harding said. "She's someone you can relate to as you go on the adventure with her."

Since this is clearly Agnes' story, skeptics have asked Harding why he included the Conan character at all.

Conan is an American pop culture icon, he said. "It's Conan the Barbarian meets an after-school special in a weird way." 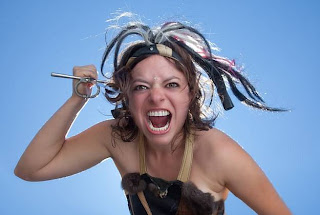