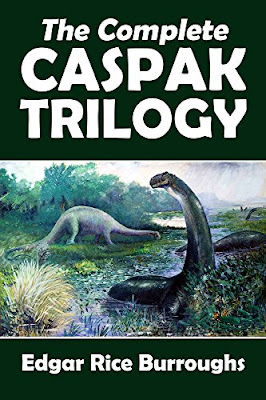 During the three days which followed, our progress was exasperatingly slow. I doubt if we made ten miles in the entire three days. The country was hideously savage, so that we were forced to spend hours at a time in hiding from one or another of the great beasts which menaced us continually. There were fewer reptiles; but the quantity of carnivora seemed to have increased, and the reptiles that we did see were perfectly gigantic. I shall never forget one enormous specimen which we came upon browsing upon water-reeds at the edge of the great sea.
-  Edgar Rice Burroughs, Chapter 3, "The People That Time Forgot" (1918)


Most of the biota of Caspak are terrible creatures indeed, locked as they are in what seems like a constant battle for survival: they menace the crew of U-33, they pursue the hominids of the island, they feast upon each other and fight to the death.

Diplodocus ajori ("Ajor's Double-Beam") is different: even among the beasts of Caprona, this animal is unique. 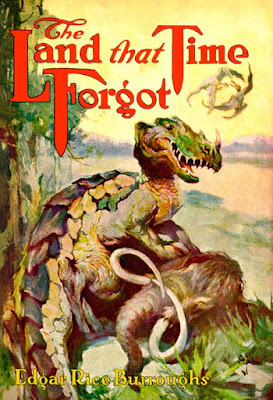 The deer lay in a small open space close to a clump of acacias, and we had advanced to within several yards of our kill when we both halted suddenly and simultaneously. Whitely looked at me, and I looked at Whitely, and then we both looked back in the direction of the deer. "Blimey!' he said. "Wot is hit, sir?"

"It looks to me, Whitely, like an error," I said; "some assistant god who had been creating elephants must have been temporarily transferred to the lizard-department."

"It is more blasphemous than that thing which is swiping our meat," I replied, for whatever the thing was, it had leaped upon our deer and was devouring it in great mouthfuls which it swallowed without mastication.
- Chapter 5

You might be wondering why this series is named Dinosauria Caspakensis, given the first two entries into its records are not dinosaurs at all. I use the term quite deliberately: the Dinosauria was, in the first place, a loose grouping of three creatures. Owens had little notion of the sheer variety of forms prevalent in this great dynasty of beings in 1842, and indeed, the latest taxonomic tumult suggests in its most extreme form that an entire family of what we used to call dinosaurs weren't members of the Dinosauria at all!

There's also the fact that it isn't clear the "dinosaurs" of Caspak are dinosaurs as we understand them at all: likewise for the pterosaurs, plesiosaurs, prehistoric mammals, and even (especially) the humans. If we go by our current understanding of evolutionary biology, many creatures on Caspak must, logically, all be members of the same species, undergoing metamorphic upheaval that makes the life cycles of insects & amphibians positively stagnant in comparison. Nonetheless, for the sake of simplicity, and to evoke the style of the time - to pick the most dynamic and thrilling name - I decided to stick with Dinosauria over the more prosaic Fauna or Animalia, which would probably be more technically correct.

In fact, only three members of the Dinosauria are actually named in The Land That Time Forgot. The first of these was encountered by Tyler and Whitely while out hunting for some venison: I figured that since Olson was immortalised by the crew of U-33, and Tyler already has an eponymous taxon, that the very strange creature they encountered should be named Allosaurus whitelyi ("Whitely's Different Lizard"). 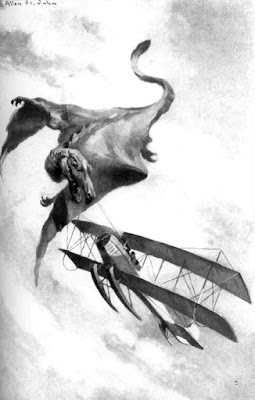 Above the trees there soared into my vision a huge thing on batlike wings - a creature large as a large whale, but fashioned more after the order of a lizard.
- Chapter 4, "The Land That Time Forgot," Edgar Rice Burroughs, 1918


There are three general "groups" of animals which are not members of the Dinosauria, but due to their size, majesty, and the terror they instill, are included as "honourary Dinosaurs" in the public consciousness. There are the "pre-Mesozoic reptilimorphs" like Dimetrodon ("two measures of teeth"), Scutosaurus ("shield lizard"), and Gorgonops ("Gorgon face"), who may belong to wildly distinct groups, but are sufficiently morphologically similar that they are counted among them; there are the marine reptiles like the Plesiosaurs, Ichthyosaurs, and Mosasaurs; then there are the Pterosaurs, who are the closest related to the Dinosaurs as fellow members of the Ornithodira.

While Burroughs only granted a specific name to Plesiosaurus olsoni, I thought that the other fauna of Caspak deserved that honour. As Bradley coined P. olsoni in honour of the man who slew & subsequently cooked it, I figured that as the first person of the U-33 to see a Pterosaur should be its namesake. That being none other than Bowen Tyler himself, I introduce to you Pterodactylus tyleri, "Tyler's wing finger."


Close by us something rose to the surface of the river and dashed at the periscope. I had a vision of wide, distended jaws, and then all was blotted out...
- Chapter 4, "The Land That Time Forgot," Edgar Rice Burroughs, 1918


The first native of Caspak the reader encounters is, alas, not technically a dinosaur, though it is one of another ruling dynasty of the Mesozoic - a Plesiosaurus ("near lizard"). "The Land That Time Forgot" is not the first story to feature a Plesiosaurus, but as far as I can tell, it is the first to do battle with a German submarine, which earns it a special place in the annals of Man vs. Dinosaur.

100 Years of "The Land That Time Forgot": Dinosauria Caspakensis 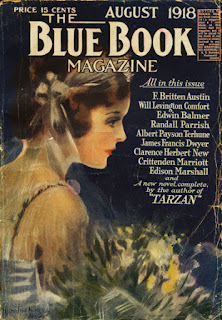 It must have been a little after three o'clock in the afternoon that it happened - the afternoon of June 3rd, 1916. It seems incredible that all that I have passed through - all those weird and terrifying experiences - should have been encompassed within so short a span as three brief months. Rather might I have experienced a cosmic cycle, with all its changes and evolutions for that which I have seen with my own eyes in this brief interval of time - things that no other mortal eye had seen before, glimpses of a world past, a world dead, a world so long dead that even in the lowest Cambrian stratum no trace of it remains. Fused with the melting inner crust, it has passed forever beyond the ken of man other than in that lost pocket of the earth whither fate has borne me and where my doom is sealed. I am here and here must remain.
- Chapter 1, "The Land That Time Forgot"


There are several significant anniversaries of particular importance to me. Obviously, Jurassic World: Fallen Kingdom is out, as well as the much-anticipated 25th anniversary of Jurassic Park on 9th June. But there are some others:


And, of course, there is Edgar Rice Burrough's "The Land That Time Forgot."

This is it. 100 years of the story from which this blog, itself almost nine years old, takes its name.

"The Land That Time Forgot" first appeared in the August 1918 edition of The Blue Book Magazine, the home of many of Edgar Rice Burrough's creations: it was closely followed by "The People That Time Forgot" and "Out of Time's Abyss," a series that became known as the Caspak trilogy.