"Conan has been done an awful lot in comics, books and video games, but not so much in movies.  With the sheer number of stories that have been told over the years, even for the half-century before the 1982 movie, it's actually quite astonishing that there haven't been more films made."

Labels: Conan the Barbarian, Confounded Imbeciles, What In Blazes 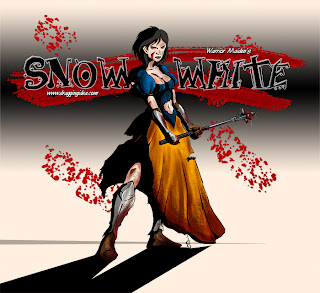 Here's another one of those ideas I had a while back: what if someone did a more action-packed version of Snow White, where the dwarfs were more Tolkien than Kiebler?

The story would go much as it normally does in Grimm's original fairytale, with one or two subtle alterations.  See if you can find them, in this shameful copy/paste find/replace hack-job on Grimm's classic fairytale...

The Filmgoer's Guide to Conan the Barbarian (1982): Contents


If anyone's particularly interested in one of the subjects, I'll see what I can do to fasttrack them.

Uttered by Taranaich at 22:13 No comments:

Conan vs Khal Drogo and other such silliness

It's interesting that following the little kerfuffle which emerged when we found out which fictional barbarian Jason Momoa has his money on, many seemed to think the dispute was about how REH fans are incensed that Jason picked the wrong choice.  However, I don't think that's the case.  For one thing, there isn't actually a debate, since we can't really know who would win out of Drogo or Conan for the simple reason that we barely know anything about the former, most specifically his combat prowess.

In A Game of Thrones, all we have to go on is hearsay.  Tales of how impressive the Khal was in battle, the fact that he has a massively long ponytail suggests he was never defeated in battle, the fact that everyone fears and respects him.  But we never see first hand evidence of his skills, strength and endurance.  He has a fantastic mystique and aura of death about him, but it's all just that: mystique and aura.  This was somewhat remedied by the TV show, but I maintain what I thought originally: that wasn't a fight, that was an execution.  Drogo was barely scratched by the "challenger," and he punished the would-be usurper with contemptuous ease.  Aside from that, we have practically no information to go on.

Conan, of course, is a different story.  We have plenty of first-hand accounts of the Cimmerian's battle against scores of different opponents. Duels, brawls, skirmishes, assaults, battles, sieges, with odds both against him and in his favour.  So we have a good idea of how Conan would fare against, say, Thomas Covenant, Imaro or Elric.* But against Drogo, all we can do is speculate.  All the more reason to be annoyed at Martin killing off one of the best characters in A Game of Thrones.

Others, he's come out on top when circumstances really point against it:


And, predictably, there are other battles he really should've won:


That said, when it comes to fictional characters, the only person who would really win is who you want to win: all the attempted empirical deduction and analysis is, unfortunately for such pedantic folks as myself, subject entirely to the whim of circumstance, bias and story.

Labels: And Now Some Nonsense, Game of Thrones

So, about that dwarf movie...

I've made a concerted effort not to talk about the recent character reveals from the upcoming Hobbit film adaptations, mostly because I couldn't really think of anything to say at the time. Everything I suspected would happen has happened: when they do it right, they do it brilliantly, but when they do it wrong, it looks preposterous.  Just like the adaptations of The Lord of the Rings.

Still, now that we've seen all thirteen dwarves, I might as well comment on them, based on my observations.

No, don't run away: I have praise as well as criticisms. I'm as surprised as you are!

Star Trek just isn't as expansive as Star Wars, according to Robot Chicken

I kind of like Robot Chicken.  It seems incredibly self-indulgent, a bunch of nerds making a bunch of nerdy sketches that only other nerds would get, but it has its moments every so often.  Plus the use of action figures adds a certain charm to it.

I think, however, that their Star Wars specials take things too far.  The whole episode felt less like an attempt at sketch humour, and more like a bunch of pals snarking and commenting on their favourite movies.  Family Guy did the same thing, and I can't fathom how these things are getting releases. However, Family Guy attempted to do the same thing with Star Trek 2: The Wrath of Khan, but Paramount shot that down. Apparently, Robot Chicken aren't even interested in doing something on not just TWoK, but Trek in general. Their explanation is somewhat bizarre.

Now THIS is a goddamn trailer.

Remember what I said last time about the Conan trailer, that all I wanted was to watch a trailer and think "I know this"?  Well, I got it in spades here.

Yes, I do miss "of Mars."  True, I think that weird glowy-bluey-liney-thingy was daft.  Indeed, I'm not a fan of the music, or the fact that Dejah Thoris wasn't quite the shade of red I thought she would be.  But goddamn, I saw Barsoom.  That was Barsoom, up there on the big screen.  That was a Green Martian holding up a gun.  That was a fleet of Barsoomian airships.

I don't doubt that there will be things I don't like about the film: there are things I don't like about the trailer.  But that's to be expected from a big-budget Hollywood blockbuster.  So far... this is easily recognizable as John Carter.  And more importantly, to me, it's easily recognizable as Edgar Rice Burrough's John Carter.

Now cue all the silly people claiming this adaptation of a 99-year-old literary creation is an Avatar/He-Man/Prince of Persia/Star Wars ripoff...

The Fall of Johann Hari

Similarly, the films which established Arnie as a movie star, the 'Conan the Barbarian' series, have a strong resemblance to the fascist myths of a heroic Nordic pre-civilisation, when strapping Aryans would fight against vicious hoardes of savages. The Waffen SS could have used Conan's philosophy, "I burn with life, I love, I slay and am content."
- Johann Hari on Arnold Schwarzenegger's impending reign, and I guess it would be too much to expect that he'd know about Howard's profound hatred of the Nazis and Fascism in general

I never liked Johann Hari even before I found out some of the garbage he said about Lord of the Rings, as noted by Brian Murphy in a passionate recent post, where he has outed Hari as a goddamn hypocrite.  I didn't even find out until today that he had the above to say about Conan.  My dislike of Hari goes beyond simple disagreements with his assessment of literature and authors I happen to like, and into disgust for his arrogance, pretentiousness, shameless sensationalism, lack of journalistic integrity, brazen plagiarism, woolly association with the truth, and most of all, his penchant for just making things up.

So ultimately, what Mr Hari says about The Lord of the Rings and Tolkien, or Conan and Robert E. Howard matters little, considering what a hash he makes of things like statistics, economics, politics and the like.  If he can't do basic fact-checking about the stuff he does for his job, how can we possibly expect him to know what he's talking about when it comes to the arts?

Rarely do I outright use such strong terms, but Johann Hari...

... You see why I try not to bring politics into the blog?
Uttered by Taranaich at 18:57 3 comments:

I came across this at the Robert E. Howard Forums.  It is fantastic.

I know it must seem like I say this all the time, but how cool would a map like this be for the Hyborian Age?  Flags, faction symbols, cities, monsters, ships, warriors, all that jazz.  The golden lion of Aquilonia, the scarlet dragon of Nemedia, Grey apes lurking in the mountains of the Vilayet, sabretooths haunting the Pictish Wilderness, Atali and the Frost Giants in the far north, , the many distinctive cities and ruins of the Black Kingdoms, the Tigress gliding down the Black Coast.  There could be little hints of the stories: Numalia would have the famous bowl, Khorshemish the Scarlet Citadel, Zamora a certain tower, and so forth.

A cartoony style would be fun, but I think taking after the Book of Kells' illuminations would be especially appropriate.  Nemedian Chronicles, wot wot.
Uttered by Taranaich at 15:47 1 comment: 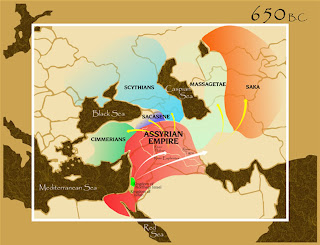 The division between the literary story and the action one

It's one of my favourites, and to say that it doesn't have the cosmic tragedy of "The Tower of the Elephant" or the dystopian degeneracy of "Red Nails" doesn't necessarily make it a bad story, just not an exceptional one. Howard wrote dozens of these sorts of tales that are great fun to read, but there isn't much else lurking beneath the surface - at least, nothing that we haven't seen better executed in previous Howard tales. With this in mind, Penzler's choice actually seems fairly good for the sort of book he was trying to compile - rough-and-tumble, boy's own adventure tales.

Unfortunately, such an approach can sometimes lead to reviews like this.

Sorry for the lack of updates again, various factors and all that.  Anyway, I had meant to post these in the Scottish Invasion posts (and will do so), but I might as well post the videos up so far here.

Ben Friberg has been providing a fantastic service for Howard fans everywhere, by posting videos of the panels from Howard Days up on Youtube. There are quite a few up there, so check out Ben's profile for more. For now, here are the first three panels from this year's Howard Days.

Ah, Cracked.  Sometimes you provide some nice information that the inattentive masses on the internet wouldn't otherwise be aware of, and other times you're saying Sauron was an alright guy.  And now you turn your daft eye towards The Lord of the Rings and Starship Troopers.

And, naturally, they bring up Tom Goddamn Bombadil as evidence that The Book Isn't Always Better.  Because, as we all know, there isn't a single second, nary a frame, of stupid belief-suspension-failure comedy in Jackson's Lord of the Rings film trilogy, right?

Labels: Confounded Imbeciles, The Lord of the Rings, What In Blazes
Newer Posts Older Posts Home
Subscribe to: Posts (Atom)