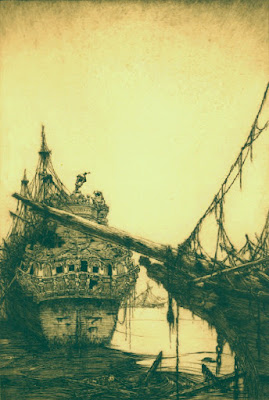 This silence, when I grew fully aware of it was the more uncanny; for my memory told me that never before had I come upon a country which contained so much quietness. Nothing moved across my vision—not even a lone bird soared up against the dull sky; and, for my hearing, not so much as the cry of a sea-bird came to me—no! nor the croak of a frog, nor the plash of a fish. It was as though we had come upon the Country of Silence, which some have called the Land of Lonesomeness.
- William Hope Hodgson, The Boats of the Glen Carrig


It is 100 years - more or less - to the day since William Hope Hodgson left this earthly plane of existence. With his passing in the monstrous horror that was the Great War, he left behind a rich library of supernatural fiction. I leave it to the Hodgson experts over at the William Hope Hodgson site for a truly fitting tribute, but I thought I'd put my own tuppence ha'penny worth too.

There are three great cycles in Hodgson's fiction, which I'll have the merest glance towards on this important occasion. Hodgson himself considered that his first three novels to be published - The Boats of the 'Glen Carrig,' The House on the Borderland, and The Ghost Pirates - form a "thematic trilogy," but I'd reckon given the multidimensional nature of his work, there's surely provision for a Hodgkins Multiverse that surrounds and penetrates; binds his work together like the tendrils of some dreadful unknown horror beyond the ken of humanity.