Made It, Ma! Top of the World! 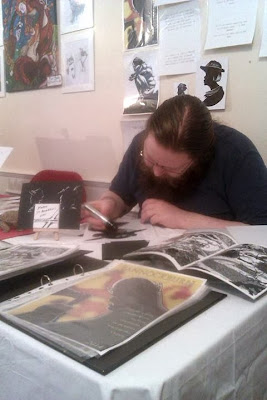 Today was a big day for me: the day where I take a new step towards respectability as a comic artist. The kind folk of the Dutch Gable House hosted a vintage craft faire, and I was invited to host a stall. Since the event had a general arty-crafty vibe mixed with Art Nouveau/Deco stylings of The Great Gatsby, I figured it would be cool to do some portraiture. I added a little twist: I took the neurological phenomenon of pareidolia, and spun it into a paranormal context - i.e. it isn't that people perceive imagery in everyday vision, but that that imagery spontaneously appears of its own accord.

Have you ever seen something unusual within an otherwise mundane object?

Perhaps an ANIMAL appears in the CLOUDS?

A WORD in the branches of a TREE?

A FACE in a layer of SOOT?

YOU ARE NOT ALONE!

This phenomenon is known as PAREIDOLIA – where a seemingly innocuous visual stimulus reveals a greater significance – and has been recorded throughout history!

The Neanderthals of Lasceaux conjured visions of MAMMOTHS upon the walls of a CAVE using only PIGMENTS and PAINT! The Ancient Egyptians used this craft to TRANSFORM what was once a normal mass of limestone into THE GREAT SPHINX OF GIZA! The illustrious Michelangelo materialized no less than THE HEAVENS THEMSELVES upon the ceiling of THE SISTINE CHAPEL!

This is but a piece of PAPER inscribed with INK. The paper was made from wood shavings as has been the fashion for centuries; the pen forged in the standard industrial manner.

Yet lo and behold, appearing upon this ordinary paper – A FACE EMERGES!
How can this be? NONE CAN SAY FOR SURE.

Most examples of PAREIDOLIA occur seemingly at random – faces, creatures, or patterns seen in natural environments. But with tuition, and nerve, YOU TOO can evoke this arcane power of the ages!

It is not only stone, marble, paint or other such esoteric materials which can be used to draw forth spectral visages – tools as simple as PENCILS and PAPER!

With the secret method known as DRAWING, practitioners of PAREIDOLIC PORTRAITURE pierce the veil between worlds, and DRAW FORTH images – capturing them in this world with the materials you see before you!

Even something as simple as TWO DOTS and A CURVED LINE, juxtaposed correctly and clearly sketched, can summon shapes into YOUR VERY HANDS!

Two travellers were crossing a vast desert, when they saw an oasis in the distance. One traveller was an artist, and so chose to set down an easel and paint the oasis; the other traveller was dehydrated, and hurried forward, intent on sating their thirst. After some time, the artist finished a wonderful painting; the other failed to reach the oasis.

Who’s to say who was wrong or right?

PAREIDOLIA
FOR YOUR
DOMICILE
Alexander J. Harron, esq, has generously allocated some time from his tireless studies in the field of PAREIDOLIC PORTAITURE to grant the customers of VIOLET SKULLS a most extraordinary opportunity – a UNIQUE PAREIDOLIC PORTRAIT!

Give it to your sweetheart, ensconce it within a picture frame, hang it upon your wall, dangle it from your locket for identification purposes, or simply display it in your drawing room as an unusual conversation piece!

For more elaborate or ambitious PAREIDOLIC PORTRAITURE, consult with Mr. Harron for possible future opportunities – though be aware that his time is precious, and he treats EVERY project with the GREATEST of MAGNITUDE.

Mr Harron also insists that his work MUST NEVER be used in conjunction with fraud, perjury, confidence trickery, witchcraft, voodoo, necromancy, black sorcery, copyright infringement, inkblot testing, or other malefic magicks – the consequence could be most grave, and Mr Harron cannot be held responsible for loss of property, possessions, sanity, or souls.

Art really is quite bizarre, when you think about it.

So this is it: my first stall, selling my art and scribbling away. Not very fancy, ridiculously cluttered, and nerves were wracked and wrought, but I turned up and lasted the day. After seeing such talented folk as Morag Kewell, Craig Collins, Neil Slorance, Ben Templesmith, Onrie Kompan, Jared Sams, Giulie Speziani, Rob Harrington, Denae Frazier, Val Hochberg, Natali Sanders, Jolene Houser, and too many others to recall, I knew that some day, I would get there. Some day, with work, confidence and guile, I would get a wee corner at a gathering, and do what they do. So many thanks to Violet Skulls Market for hosting me, the preposterously generous Mhairi M. Robertson for being a wonderful neighbouring artist, my tireless family for the support and assistance that got me through, my friends who never doubted in my abilities when I most needed validation, and all the artists who awed me at their stalls from Glasgow to Phoenix who told me "yes, you can do it too."