I've decided to enact on a new policy regarding comments.  Previously, I received an email that a new comment had appeared on the blog, but given how cluttered my inbox became since then, sometimes comments get lost in the loop.  Well, I've decided to find a way to ensure not only that I read every comment, but that you know I read the comments - by implementing comment moderation!

This means that if someone or somebot posts spam, I can delete it, and if the content is unsuitable for a family audience, I can have some time to assess it before making it public.  I've been neglecting comments too much, and I'd like to make sure that I read them all, and none get lost in the shuffle.
Uttered by Taranaich at 22:59 8 comments:

Labels: News and Events, The Blog

The Dinosaurs That Never Were 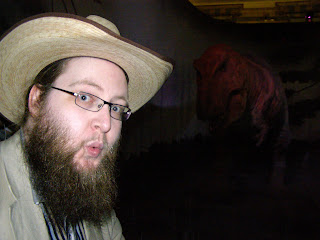 You can know the name of a bird in all the languages of the world, but when you're finished, you'll know absolutely nothing whatever about the bird... So let's look at the bird and see what it's doing - that's what counts. I learned very early the difference between knowing the name of something and knowing something.
- Richard Feynman


Even though I was growing up during the Dinosaur Renaissance, a lot of that scientific knowledge had yet to filter into popular consciousness, particularly in the West Coast of Scotland, where only the nine richest earls owned a television until the Tellyvolution of 1987 and telephones strictly regulated by the parish tea group.  As such, many books printed in the 1970s and even early 1980s were full of information that had been outdated for decades: sauropods still dwelling in swamps, all dinosaurs still dragging their tails, and even genera which had been done away with. Thus, my childhood was full of paradigm shifting discoveries as everything I thought I knew about dinosaurs changed, sometimes profoundly.

On Missing Posts and Senses of Purpose

For the first time in my two years writing this blog, I've decided to delete two posts.  I am not going to discuss them, nor my reasons for deleting them, and I would appreciate it if those in the know would refrain from any direct references to the things discussed in those posts.  This is my blog.  I don't want anyone to be further offended by the debate which was ensuing: anyone wishing to continue with it is free to do so at other places more suited to such discussions.

I've had fifteen complaints from my 160(!) followers, which is statistically quite a high percentage.  This isn't what I started this blog for.  This is meant to be a fun, whimsical corner of the net full of notions on dinosaurs and scholarly musings on classic tales of adventure.  Let's get back to that.

EDIT: Just so everyone's clear, the complaints were about the boring, age-old argument that has been discussed for well over thirty years across dozens of journals, books and fanzines, including a particularly lengthy thread that started in 2003, as well as another boring, age-old argument that has also been discussed at considerable length. To anyone interested in continuing those discussions, I direct you to the links above, which themselves provide directions to further reading.

The main complaint people had was that I was wasting too much time on this debate, when I had promised more stuff on dinosaurs and some more whimsical content.  They had no interest in this debate, as there was nothing new to say that hasn't been said hundreds of times before.

I will delete any comments regarding the details of the subject.

The Hunger Games, and Hope for Dark Agnes 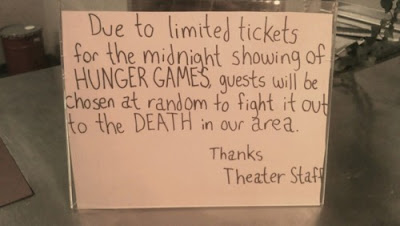 "A star of darkness shone on her birth, of darkness and unrest. Where ever she goes shall be blood spilling and men dying. I knew it when I saw her standing against the sunrise that turned to blood the dagger in her hand."
- Robert E. Howard, "The Sword Woman"

So while John Carter's doing a wee bit better than Disney and most of the world's media predicted, it still isn't the resounding success it really should be, certainly not in the homeland of the story's creator. In contrast, another literary adaptation, The Hunger Games, is doing gangbusters (to use a favourite vernacular) to the tune of being the most profitable box office debut for the first film of a franchise, only The Dark Knight and Harry Potter & The Deathly Hallows: Part 2 beating it.

Unlike John Carter and, well, most films adapted into books, I haven't read so much as a page of the source material on which The Hunger Games was based. This, then, was a rare opportunity to go in to an adaptation and not be informed or distracted by my preconceptions of the source material. This is a double-edged sword: I may not get as much out of the film as I would had I read the books, and I could stumble upon plot points that are explained in the book - but at the same time, I may not be as distracted by divergences or clashes with my personal preconceptions.

Well, I fairly enjoyed it, and was pleasantly surprised, not least because my faith in the future of blockbuster cinema has been revived, at least a little.

This is just too incredible not to share.  Truly it turns our perspective of Howard and his work completely on its head!

At the time of his death in 1936, thirty-year-old Robert E. Howard had published hundreds of works of fiction across an astonishingly broad swath of genres. His voluminous output, according to Paul Herman of the Robert E. Howard Foundation, is estimated to have been “approximately 3.5 million words of fiction, poetry, letters and articles.” Among those millions of words were the iconic stories of Conan the Cimmerian, a character whose popularity has firmly established Howard’s reputation as the father of heroic fantasy, parallel to J.R.R. Tolkien’s place as father of epic fantasy.

But while Howard was an extraordinarily prolific writer, he was also a somewhat disorganized one and left behind a trunk of unpublished works. The so-called “Howard Trunk” contained thousands of typewritten pages by Howard. These abandoned stories and early drafts were collected and published in 2007 by The REH Foundation Press as The Last of the Trunk.

One manuscript, however, baffled the Howard estate. The handwriting was not Howard’s. “Not even close,” laughs George Angell, professor emeritus at Brown University, who was asked to authenticate the manuscript. “I could see at a glance that it was one-hundred percent positively not his. Howard’s hand is tight and masculine. This was a beautiful script, almost calligraphic, and my gut told me it was English, about two hundred years old.”