It's been 7 years to the day since Steve Tompkins left us. For the first time since, I've felt really apart from Howardom.

I've contributed to the upcoming Conan board game (which is, as of writing, the most successful board game Kickstarter of all time) and the Conan RPG (which is the fourth most successful RPG Kickstarter campaign of all time), not least because my Howardian scholarly pals Jeffrey Shanks, Patrice Louinet, Chris Gruber, and more are personally involved in their development. I lament the passing of the Robert E. Howard Forums, even in what is a great time to be a Howard fan. I'm long past caring about whatever iteration of development hell the next Arnold Conan is in. I've allowed my memberships of REHupa and the REH Foundation to lapse. And I came to the personal ultimatum that I would not be able to return to Howard Days until certain conditions are met. 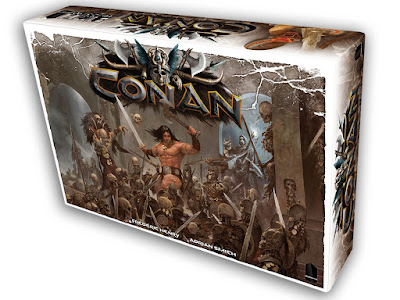 I haven't been in regular touch with my Howard friends - but it is far from apathy. I would love to talk about the new board games, new collections and scholarly criticism, new books and films and art that evokes Howard's themes and ideas. I should be shoving my way into discussions about developing Iranistan and the Border Kingdom, asking who thought that dragon design was a good idea, giving my tuppence ha'penny worth on anything and everything. I'd even just love to see how they're doing, how the house and family and work is coming along. But for reasons I think regular readers will guess, I cannot - not until the cause is won.

I sometimes wonder what Howard would do in a situation like mine. Early 20th Century Cross Plains and early 20th Century Inverclyde have a few pointed similarities (formerly industrious towns with busy railroads, now a fraction of their former size, a history as a "frontier"), but for the most part, they might as well be different planets. What if the prospect of true change, to turn away from the corruption and decadence of the political class, were possible in Texas then? Would he continue to do what he truly loved, and type away, rather than take up political cause - when the savage realm of politics is as likely to chew you up and spit you out as you are to affect real change? Or would he try to change his corner of the world at the expense of his art, his long letters to his friends, his roughousing at the ice house? Am I being melodramatic, in comparing my politics to a great Cause and my personal interests as Art?

Who knows. All I know is that if I chose to take a different path, I don't think I could ever forgive myself. I posted this on my political blog, but I think it should be on here, to explain what I'm doing until I'm ready to ride back to Cimmeria.

Since 2010, I’d been going to Cross Plains in Texas. It’s the biggest extravagance I took part in each year, owing to the sheer expense of flights to America in recent years – to say nothing of the security gauntlet. The last time I went was in 2014. There were only a few months left until the referendum. I left Scotland for a month. The final result was decided by 86 votes.

Most of the campaigners I know still wring their hands – if only I did more. Everyone felt that. “If only I didn’t take that night off from canvassing on Sunday.” “If only I helped out at the stall more.” “If only I helped deliver more papers.” If only I stayed this year – of all years. Instead, I went to Cross Plains. I saw all my friends and relatives. I talked about the referendum any chance I got. I was sure we’d win, and win comprehensively. I was itching to get back home, to continue campaigning – but I figured I wasn’t that needed. Everyone at Yes Inverclyde worked hard. A recharge, a break, to come back rejuvenated and revitalised, was my justification.

Would it have changed anything? Would my mere presence in late May and early June in this most important year in Scotland’s history have had any effect on the official count? Nationwide, I doubt it – but it’s hard not to think that a constituency decided by 86 votes might have been affected by even the smallest nudges in a different direction. Would it have turned 86 more votes for No in the official count into a Yes result? Who knows.

I can never go back to America – not without Scotland’s independence assured. Every time I think of how optimistic and determined I was talking to my friends in America, I cannot help but feel the most profound sense of shame. Shame in so many of my countryfolk politely and democratically refusing what scores of countries fought for with every nerve and sinew, sure. Shame in my own misplaced confidence and naivete, that the British Establishment could be so easily defeated, undoubtedly. But most of all, shame in myself. Even putting aside any influence I, or any one individual, may have made on the result locally, what matters is that I left my people in the most important time of my country’s existence. There are people I can hardly bear to talk to online anymore, so deep is my personal sense of failure and mortification. How could I bear to show my face outside Scotland ever again?

I have two choices: either slink back to America with the contrived, pathetic, false nobility of the Dying Gaul, or I stride back with the assurance that my people were not the dog who handed back the leash to its master as soon as we were given the choice of freedom. I don’t want to keep my pals in America waiting much longer.

Uttered by Taranaich at 21:46 No comments: