The Moon Pool - A Century of Adventure with A. Merritt

The publication of the following narrative of Dr. Walter T. Goodwin has been authorized by the Executive Council of the International Association of Science.

First:
To end officially what is beginning to be called the Throckmartin Mystery and to kill the innuendo and scandalous suspicions which have threatened to stain the reputations of Dr. David Throckmartin, his youthful wife, and equally youthful associate Dr. Charles Stanton ever since a tardy despatch from Melbourne, Australia, reported the disappearance of the first from a ship sailing to that port, and the subsequent reports of the disappearance of his wife and associate from the camp of their expedition in the Caroline Islands.

Second:
Because the Executive Council have concluded that Dr. Goodwin's experiences in his wholly heroic effort to save the three, and the lessons and warnings within those experiences, are too important to humanity as a whole to be hidden away in scientific papers understandable only to the technically educated; or to be presented through the newspaper press in the abridged and fragmentary form which the space limitations of that vehicle make necessary.

For these reasons the Executive Council commissioned Mr. A. Merritt to transcribe into form to be readily understood by the layman the stenographic notes of Dr. Goodwin's own report to the Council, supplemented by further oral reminiscences and comments by Dr. Goodwin; this transcription, edited and censored by the Executive Council of the Association, forms the contents of this book.

Himself a member of the Council, Dr. Walter T. Goodwin, Ph.D., F.R.G.S. etc., is without cavil the foremost of American botanists, an observer of international reputation and the author of several epochal treaties upon his chosen branch of science. His story, amazing in the best sense of that word as it may be, is fully supported by proofs brought forward by him and accepted by the organization of which I have the honor to be president. What matter has been elided from this popular presentation—because of the excessively menacing potentialities it contains, which unrestricted dissemination might develop—will be dealt with in purely scientific pamphlets of carefully guarded circulation

THE INTERNATIONAL ASSOCIATION OF SCIENCE
Per J. B. K., President 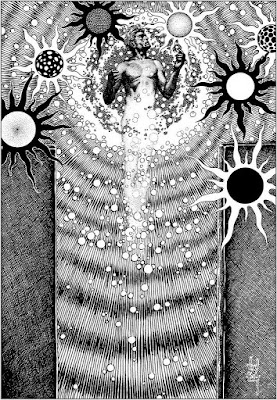 "The Moon Pool" illustrated by - who else? - Virgil Finlay.

While many stories utilise the Literary Agent Hypothesis, there aren't many as taught and instantly compelling as the above foreword.

Thus began "The Moon Pool," the third published story by A. Merritt, and the tale which changed everything.