Putting the Terror Back Into Terrible Lizards 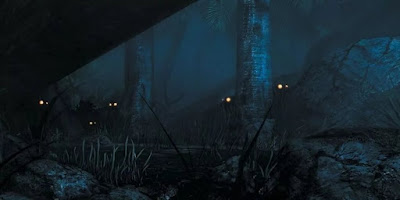 The depiction of dinosaurs as monsters has long been a bit of a double-edged sword. On the one hand, dinosaurs-as-monsters has kept them in the public consciousness, and acted as a gateway for more nuanced & naturalistic media, like documentaries. On the other, it can be dispiriting to see them depicted as run-of-the-mill bogles. One of the things I still applaud Jurassic World for its recognition of this dichotomy, exemplified by the Indominus & Indoraptor - warped, disfigured, monstrous abominations which bore little resemblance to the animals from whence they came.

So while I love media that presents dinosaurs as animals, or with a wide variety of temperaments, I also appreciate new ways of making them scary. The Velociraptors in Jurassic Park were iconic because not only were they savage & dangerous, they were also intelligent. This added a certain existential dread to their threat: you could outsmart a T.rex or a Dilophosaurus, but could you be so sure you could outsmart a Raptor?

With that in mind, a fellow RPG aficionado posed this question to me:

I need some truly nasty dinosaurs, real bastards, things that could lay waste to a tough band of adventurers. Real nightmare fuel. Thrill me.


Well, I couldn't not respond, could I?

Because I had such fun writing this, I thought I'd write it down on the blog for posterity.

Mortal Engines & the Tyranny of Realism


I love realism in my speculative fiction, but I am by no means beholden to it. I can enjoy realistic science fiction like The Andromeda Strain, 2001, Interstellar, Silent Running, and Moon at least as much as I relish scientific romance & space operas like the Space Trilogy, the Barsoom saga, & Star Wars. It's answering the question "Do you like hard or soft science fiction" with "yes."

Take dragons, for instance. I greatly enjoy the likes of The Last Dragon/Dragon's World: A Fantasy Made Real, which offered a fascinating pseudo-palaeontology for dragons, from the early draconic creatures of the Late Cretaceous which survived the K-T extinction, to the variety in forms which led to Marine, Occidental, and Oriental forms. Similarly, Gordon R. Dickson's The Dragon and the George and its spiritual companion, Peter Dickinson's The Flight of Dragons (both inspiring the fascinating Rankin-Bass cartoon sharing the latter's name) offer inventive extrapolations into dragon society in fantasy settings, as well as the anatomical nature of dragons.

8-year-old Aly ate stuff like this right up. In this age of the Internet, daft nerds like me can explore further than ever. Shad Brooks' series Fantasy Re-Armed does for other fantasy beings what has been done for dragons, from dwarves to elves, orcs to mermen, minotaurs to centaurs, fairies to giants, while also exploring traditional fantasy elements like dungeons, castles, paladins, and barbarians. It's a great time for those people in the middle of that very niche Venn diagram that loves hard science and complete invention.

At the same time, however, I don't need my fantasy creatures to be realistic (imagine that). I don't scoff at the unrealism of Ancalagon the Black being ludicrously huge, nor will I be over fussed if one dragon or another defies the laws of aerodynamics. I will not immediately dismiss a work of fiction because one thing or another isn't realistic, and I cannot believe I'm actually saying these words about stories with freaking dragons in them. Speculative fiction does not have to adhere to the constraints of our current reality: it doesn't even have to acknowledge them. All it has to do is be true to what it is trying to achieve.