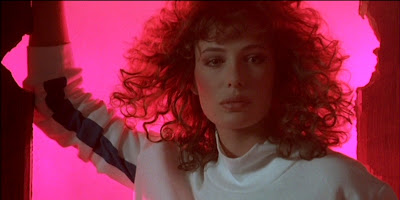 The Further Perils of Patriotism

I'm lifting my moratorium on talking politics on the blog for what I hope will be the only time, just so people can be clear about it, and why it's simultaneously very important to me, yet something I don't want to use to burden this blog.

Oz: The Great And Powerful was intriguing in the way Raimi's own Drag Me To Hell was - more interesting as a study or commentary than as a narrative. In Oz's case, I got the distinct impression the movie was a study in the magic/trickery of cinema, the audience's participation in suspending disbelief, and the invitation of parallels to reality even in fantasy worlds. Not sure if it's intentional on Raimi's part or not, but I was pleasantly surprised.


WE'RE OFF TO SEE THE SPOILERS

Obviously this isn't Baum's Oz, it's another riff on the MGM film. Despite Raimi's transparently false protestations that this was more tied into the books, it might as well have had Evanora wearing ruby slippers. I think this was more to get MGM off Disney's back than trying to appease the Baum fandom, but in any case, it isn't the only thing seemingly stuck in the 1930s.


There's a lot of criticism of the film's apparent chauvinism and anti-feminist idealogy: the three most powerful women's conflict centres around a man, and how it was prophesied he would save and liberate Oz, with two of them even falling for the cad. Indeed, Oz is partly responsible for several very important aspects of later Oz mythology. Frankly I think the salient fact that Oz was a *fraud* who didn't actually have any power, combined with the most functionally powerful figures being women, could still be read as pretty feminist. Kind of. If you squint.

Consider: the conflict in the film is between Glinda and Evanora, with Theodora being neutral. Glinda & Evanora have a stalemate, with a slight advantage to Evanora given her machinations and politicking.  When Oz comes into the picture, he makes things instantly worse for Glinda by inadvertently causing Theodora to align with Evanora, making it two Wicked Witches against one Good Witch. Therefore, it could be argued that this isn't so much a case of  Oz saving the day, but rather evening the odds. Glinda, after all, could only do so much with a population forbidden from killing, and two witches equally as powerful as herself.

Perhaps, then, the film is simultaneously upholding and demolishing that old chestnut of patriarchy, that while women are all well and good, what civilization really needs is a man! Even if he's completely ineffectual as a ruler, wizard and general human being, the fact that he's The Wizard, not The Witch, seems to be some magical clause which causes the people of Oz to adulate and near-worship him in a way they didn't for any of the witches. Look at just about any political system in the world, and you'll see this ridiculous notion in practise: it's no coincidence that there was a black male president of the United States before there was a white female president. Were the Witches buying into the patriarchy themselves, or were they actively exploiting it to achieve their goals? If the latter, why would they bother, considering their powers are quite clear, and could provide a precedent for a more egalitarian society? Come to think of it, is Oz as ensnared by patriarchy as our world? It certainly had no apparent problems with race, with many black individuals among the Munchkins and Quadlings.

THE WONDERFUL SPOILERS OF OZ

Maybe this is one of those films where you can read both a feminist and misogynist image into it: going out of it, though, I felt that it was clear Oz' "power" was just as phony as it was in the original, and that the Witches are the true power of Oz.

The Perils of Patriotism 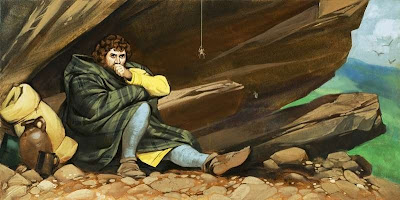 If only Angus McBride was still with us...

The more I read Scott Oden and Howard Andrew Jones' work, the more inspired I am to write/draw that Scottish historical epic that's been on my mind. Think the Battle of Bannockburn given "The Grey God Passes" treatment.
- A Facebook status update which spiralled out of control

Well folks, here it is, after seven days, I have completed the first page of my Battle of Bannockburn comic!  This first page is a gritty and entirely historically accurate interpretation of the famous tale of Robert the Bruce and the Spider. This is intended to be as authentic as possible, none of the Hollywood razzmatazz generally associated with historical fiction: it's as close an attempt as possible to adhere to historical events, as you'll no doubt appreciate.