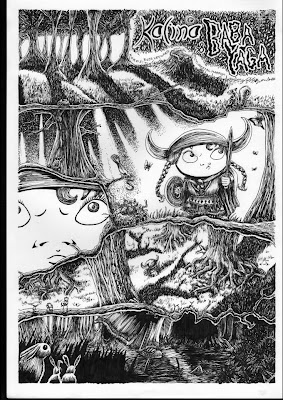 Preview of "Kalina & the Baba Yaga," which goes on sale from Black Hearted Press on Hallowe'en 2012, with a launch party at 55 Parnie Street, Glasgow at 7pm.

Well, just as I thought I was out, they drag me back in.  Actually, no, I have no-one to blame but myself for going back to the Conan Movie Blog: after all, this whole thing is my fault.

I'm officially not allowed to complain about The Legend of Conan any more.

CROM DAMN IT ALL.

Universal Pictures has made a deal for The Legend Of Conan, an action film that will star Arnold Schwarzenegger in one of his signature roles as Robert E. Howard’s mythic barbarian. The deal brings Conan and Schwarzenegger back to Universal, which released the first film that launched Schwarzenegger’s movie career back in 1982. Universal has world rights on the film.

The film will be produced by Fredrik Malmberg and Chris Morgan. Malmberg is CEO of Paradox Entertainment, which holds the rights to Conan. Morgan is the Universal-based writer and producer whose credits include the last four Fast and the Furious films, along with Wanted and 47 Ronin. Morgan has hatched the story and might write the script. The caveat is that the studio wants The Legend of Conan for summer 2014, and Morgan might not be finished writing the seventh Fast and Furious installment by then. If that happens he will be a very active producer, because this is Morgan’s dream project.

Schwarzenegger starred in two Conan films before moving on to Terminator and other blockbusters as he became the world’s biggest action star. Paradox was involved in a 2011 reboot at Millennium Films that starred Jason Momoa and misfired. Paradox’s Malmberg, who moved the project away from Warner Bros after seven years of development with big name filmmakers because the project was moving too slowly, feels that this is the version of the film that he and everybody else always wanted to see on the screen but couldn’t while Schwarzenegger was Governor of California.

“The original ended with Arnold on the throne as a seasoned warrior, and this is the take of the film we will make,” Malmberg told me. “It’s that Nordic Viking mythic guy who has played the role of king, warrior, soldier and mercenary, and who has bedded more women than anyone, nearing the last cycle of his life. He knows he’ll be going to Valhalla, and wants to go out with a good battle.”

There are no plans for Momoa to return. Morgan said that in his mind, The Legend of Conan not only skips over that film, but also the 1984 sequel that Schwarzenegger starred in. The direct link is to the original, which was directed by John Milius from a script that he wrote with Oliver Stone. That was a testosterone-laced exploration of Howard’s mythology of a child sold into slavery who grows into manhood seeking vengeance against the warlord who slaughtered his family and his village.

“After the original seminal movie, all that came after looked silly to me,” Morgan said. “Robert E. Howard’s mythology and some great philosophy from Nietzsche to Atilla the Hun was layered in the original film. People say, he didn’t speak for the first 20 minutes of the film, but that was calculated in depicting this man who takes control of life with his own hand. This movie picks up Conan where Arnold is now in his life, and we will be able to use the fact that he has aged in this story. I love the property of Conan so much that I wouldn’t touch it unless we came up with something worthy. We think this is a worthy successor to the original film. Think of this as Conan’s Unforgiven.”

Let's go through stages of grief of a Howard fan - not representative of all Howard fans, of course, just one in particular. I'll approximate it through the use of video clips. Then I'll try and give a more level-headed commentary. Emphasis on try. I am so crotchety right now.

This series just isn't for me. If it wasn't already clear in comic form, then it's clear as day in animated form, with its extremely young sounding Conan (my 13-year-old cousin has a deeper bass than whoever they got for this, and Conan's supposed to be in his 20s in this story) and somehow hearing Wood's prose and dialogue being spoken aloud makes it even more jarring considering how memorable Howard's actual opening was. And I'll never get over that ludicrous pier hop. For Crom's sake, guys.

On the plus side, if you keep drumming in that this is the equivalent of a Teen Romance version of Conan, it's not that bad. This is to Howard what Clueless was to Jane Austen, Cruel Intentions to Pierre Choderlos de Laclos, or Easy A to Nathaniel Hawthorne, though at least Wood didn't set it in a Hyborian Age High School. For some reason that makes it a lot more palateable to me.

Which, again, cuts into the main thing: this isn't REH's Conan, it's Brian Wood's Conan, just as Conan the Barbarian was John Milius' Conan. Treat it as such, and you'll probably enjoy it more.

Thank you, one and all, for the veritable avalanche of emails, messages and pokes about this marvellous piece of ''news'' from The Arnold Fans just as I was getting settled in on my holiday on the Mediterranean.

Ten years ago AintItCoolNews.com helped TheArnoldFans.com to obtain over 14,000 signatures on our "King Conan: Crown of Iron" petition. In 2003 Arnold agreed to star in King Conan as his follow-up film to T3. We all know what happened next. Well, good news, it may be moving forward again. I've uncovered some very interesting news and comments regarding Arnold wanting back in. Not only did Jennings of TAFs speak with several of Arnold's closets friends regarding his very possible return, I also have some interesting comments from the Conan right holders at Paradox. Wait until you read these comments and interviews! Conan's Sandahl Bergman is on the book's cover with me.

Naturally, NOW is the perfect time for Arnold to reprise this role. At the end of the first two films, it shows him roughly at a 65-year-old, grey bearded and looking ballsy. Well, guess what, The Oak has matured!


I've compiled my thoughts on Crown of Iron, Conan the Conqueror, Conan the Sextagenarian or any other Venn-film where Arnold Schwarzenegger and Robert E. Howard's creation intersect, but I've noticed more than a few people who are still optimistic about the idea. After all, since the King Conan script has been going around the internet for so long, that suggests they could make a new story - perhaps one closer to the source material -

Let me stop you right there.

Predictably, everything is draped in late Gilliam, and the action is meticulously humorless — as Howard was himself. The site of a "failed" witch burning, exploded out around the stake and scattered with eyeless corpses, suggests a more interesting medieval pulp tale, but what we get is brisk, atmospheric, and faithful, for better or worse, to Howard's earnest voice.
- Michael Atkinson, who shows about the usual level of knowledge and accuracy of Howard and his work among film crickets

Howard's character and theme of a Puritan fighting the supernatural evils of the world gets even grittier, and adds a backstory of Kane seeking redemption after showing him to be just as evil as the horrors he encounters.  This is a welcome addition and does not hamper the character... Liberties were taken with the character, but like The Dark Knight formula: if you remain true to the character, you can change the window dressing.
- Chris Mancini, a professed fan who considers Solomon Kane accurate to Howard's creation

Based on stories by Robert E. Howard, the creator of Conan the Barbarian, the movie hews very close to the tone, spirit, and style of the source material. Instead of reinventing the character into a pastiche of modern archetypes and tropes like so many big-budget studio tentpoles, the filmmakers set their sights on faithfully translating the character to the screen without involving so much interpretation that the core elements that make him compelling disappear.
- NO NO NO NO NO NO NO 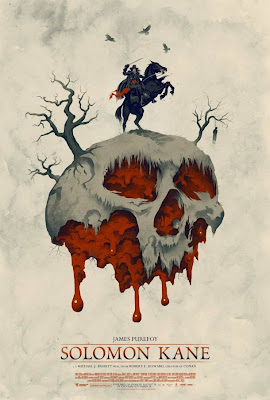 Since Solomon Kane has been released in the land of his creation after almost three years since its release in other regions, we've been seeing a lot of reviews of the film with fresh eyes. Some are pretty good, which at least give decent reasons for their appraisal of the film, and others are pretty bad, with the same depressing mix of "it takes itself too seriously for a proper fantasy romp" and "doesn't this all remind you of Van Helsing and all these other films that are themselves highly derivative of the source material."

My appreciation for the film has suffered over time, but I still want to say it's a decent film. It's certainly better than a lot of these dark historical fantasy films that've been released of late, and I maintain it's one of the better Sword-and-Sorcery films out there. I'll happily recommend it from that point of view. As a Howard adaptation, though? Ye gods.

Having taken time off following a hospital trip, I took the opportunity to read. In addition to a few new books, I also re-read some old favourites, including the Kane stories, but this time, I read them with the qualification: does this story still make sense if Solomon Kane happened?

(Prepare for spoilers for a 3-year-old film I've been talking about since 2008 that's only playing in a dozen or so theatres, probably because the Weinsteins are the Weinsteins)