For most of my life, there have been several things that never left me: love of adventure fiction (be it science fiction, fantasy, historical, comic, anything), dinosaurs, and art. I went through many different ideas of where this would take me. It became clear early on that I was incapable of any job that required even the merest mathematical input, which ruled out quite a substantial amount of worthy occupations like cashier, accountant, or shelf-stacker. My great appreciation for dinosaurs from an exceedingly early age seemed to suggest a career in palaeontology, but the sheer amount and complexity of pesky formulae and schematics threatened to make my first love into a chore, which seemed perverse, and so I didn't pursue that for long. Palaeoart had the same problems, since if you want to be a real palaeoartist, you had to do sophisticated technical diagrams of fossils and painstakingly measured measuring measurements. Too much maths dammit!

So if not palaeontology itself, where could my obsession with dinosaurs take me? Naturally the arts in some fashion, which would also tap into my adventurous side. All through my schooling life, it was my art that seemed the "best bet" when it came to a career, and though I was lucky enough not to be given the "stop your doodling and knuckle down on some real work like trigonometry and chemistry" schpiel, I still felt that it was an uphill struggle, that only the really good got to become artists, and that it was a deeply competitive field of cannibalistic persuasions. Of course, the "high art" of figure, still life, portrait and abstract art was separated from the likes of comics and illustrations, so I was always encouraged to take after the legends of art, not that kid's stuff. And the sad thing is, I bought into it for a while: I didn't think I'd be interested in comics until I started reading the real gems the medium had to offer, and it was well into High School.

Then to college: what to do? I spent three years on a transitional program designed to help early school-leavers (I never made it past third year due to a mysterious illness that doctors never officially wanted to call a brain haemorrhage), but after that I got into more mainstream further education. I decided on book illustration, since I loved the black-and-white plates found in many a ripping yarn, and felt at that time that's what I wanted to do. But unfortunately my perennial lack of confidence in my own abilities meant I was forever comparing myself to "real" illustrators, and so when one of my lecturers suggested I go into computer animation, I redirected my efforts. Then I thought of all the great animated films and the possibility of creating films based on my favourite tales: then, that's what I wanted to do. Again, though, I just looked at all the other animators and studios producing top-notch work, while only seeing the flaws in mine (sensing a pattern here?), so for a few years I was trying to find my calling.

Which brings us to present day, more or less. Tons of different ideas bounced around my head: I could be a game designer, using Conan: Total War to get myself acclimatised to the world, but again, blasted maths and self-doubt scuppered that. Then I thought I could be a great writer, seeing all the Robert E. Howard fans and scholars who went on to publish their own stories - but again, lack of confidence in my abilities stalled  that. The Encyclopedia continues, but it's very much a labour of love: I don't see myself doing something like this as a job, per se. Howard scholarship is extremely rewarding, but I doubt I'd be able to make a career out of it. Eventually I got tired of letting that little critical voice in my head cow me, and seeing all the sheer tripe that does get published/filmed/printed because that old Thomas Edison quote about inspiration and perspiration got me started.

And it just so happens that the first opportunity to come along when I was in this mood was comics.

I like comics a lot, though as I said earlier, it took me a while to get into them. Well, that isn't strictly true: I read the many adventures of Tintin and Rupert Bear, a few issues of the Marvel UK Transformers, the occasional Beano and Dandy, and the simply fantastic "history of palaeontology" comics in Dinosaurs! magazine. I mostly got into the classics from family recommendations: Watchmen, V for Vendetta, From Hell, Alan Moore's run on Swamp Thing (in fact just about every Alan Moore thing), Neil Gaiman's Sandman series, Transmetropolitan, Kingdom Come, The Dark Knight Returns, Batman: Year One, Arkham Asylum (quite a few Batmans), and even some manga like Barefoot Gen. Some were recommendations from friends like 2000 AD (Flesh, Slaine and Judge Dredd being my faves). I even got comics about comics like Scott McCloud's essential Understanding Comics. And, naturally, I checked out adaptations of my favourite books and characters, ranging from the sublime to the Bruce Jones.

However, it wasn't until recently that I started really delving into comics at a course at my local library. There I met with folks my own age with similar interests, and we've been meeting up every week since - long after the course ended. It was through these fellows I discovered so many new comics: some I liked (WE3, DMZ, The Invisibles), some I didn't (Scott Pilgrim vs The World, Jimmy Corrigan: The Smartest Kid On Earth, - I know, blasphemy!) and others I'm deeply ambivalent towards (Kick-Ass, The Walking Dead, Sin City: The Big Fat Kill), with a few more recommendations that I've yet to get around to. As luck would have it, not only are my fellows great company, they're also very talented. Two of these fine chaps are Ross Leonard and Brian Rankin, who wrote and illustrated Maximum Alan, which I mentioned before on the blog.

Now on the first of this darkest month of the year, I feel it is time to finally divulge What I'm Up To These Days - drawing a comic. Or, in more detail, I'm currently collaborating with Ross on a 6 page horror-themed comic which will be published in an anthology on 31st October this year through Blackhearted Press. It's still baby steps, of course: this isn't the first comic I've drawn, but it's the first that's going to be published. That's huge for me: up until now my comics have been for pleasure or for charitable/promotional purposes. And I have to say, it's tough work: Ross has been an absolute champion to work with, but with this being my first bash, it's extremely hectic and nerve-wracking.

To say exactly what the comic's about would be telling, to say the least, but to give you an idea, I'm going to present a character model sheet: if you know your stuff, you'll probably guess what the comic's going to be about simply from this small image. I will say that the style I'm going for is a mix between classic horror comics of yesteryear with a bit of German expressionism, Edward Gorey and Herge, and probably some Jhonen Vasquez and Roman Dirge thrown in (but just a little): 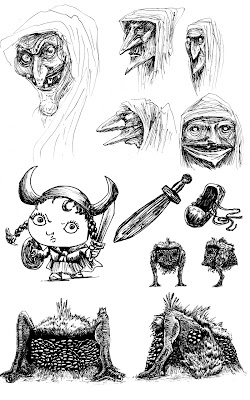 I've also had some very intriguing and exciting offers since posting the inaugural Art of Time's Abyss, which suggests to me that I should've done this a long time ago.
Uttered by Taranaich at 22:10