After seeing the fantastic work done by many folk translating REH into French, Spanish, Portuguese, German, Swedish and many more, and having also seen many classic authors' work translated into Scots, I'm sorely tempted to translate some REH into my people's language. There are quite a few poems that I think would sound grand in Scots: obviously the ones involving a Scot like "The Rover". Maybe even some stories starring Scots.

Certainly Howard quite liked the Scots language, and he's even written a poem in the tongue.

(The following first appeared in my REHupa 'zine, "Elephants, Figs, & Lobsters With Wigs")

Barbearians: The Right Paw of Doom 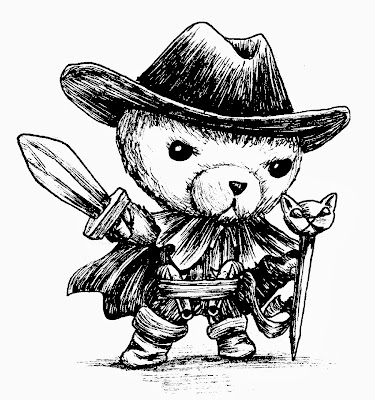 “I am a landless bear.  I come out of the sunset and into the sunrise I go, wherever the Lord doth guide my feet.  I work the will of God.  While naughtiness flourishes and boo-boos grow rank, while bears are persecuted and teddies wronged, while small things, bear or animal, are maltreated, there is no naptime for me beneath the skies, nor snuggle at any board or bed.”