Courtesy of Black Gate, I came across Lotus' latest write-in poll for The Best Fantasy/Science Fiction works of the 20th and 21st centuries. I say works, because although they say it's "a poll for the best novels and short fiction of the 20th and 21st centuries, with five categories in each century: SF novel, fantasy novel, novella, novelette, and short story," I can't find much distinction between novel, novella, novelette or short story - not to mention a few other confusing elements.

Read on for the results.

Out of Shadowed Hills

I will tell you of the birth of my son.

In my youth, I was impetuous, wild, full of rage and passion and hate - much like other women of my tribe at that age. But our people did not show it often. Something about our homeland, our dark, sullen, cold realm of mists and shadows, prevents us from it. Our moods are black and melancholic, given to monstrous dreams. Darkness and the night pervaded even our waking thoughts... but not in battle. In those mad exhultations, when our blades flame crimson and agony shoots through our sinews, our spirit finds release. No longer are we moody and dour, but burning with red fury and joy - not at the killing and feasting of swords, but at being alive. It is only when one is at the closest to having their life taken that one truly experiences what life is - distilled, tangible, seething, screaming life. And when that experience comes, we have the strength and will to fight tooth and nail so that we remain alive - such is the one gift breathed into our souls by our grim chief god. 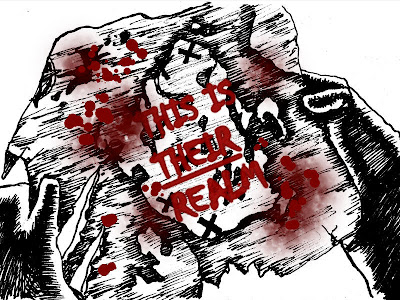 I wouldn't give it much thought except that so many of its reviewers have praised it as faithful to the book, or even superior to it, all of which adds insult to injury and is demonstrably wrong.
- Wayne Hammond, Tolkien Scholar

... I watch the Jackson films with my facial muscles rushing back and forth between Comedy Mask and Tragedy Mask on almost a line-by-line basis...
- Steve Tompkins, Howard & Tolkien Scholar


It surely hasn't escaped your notice that The Hobbit will be out this month across the world. Most of geekdom is ecstatic, and rightly so, since this is an adaptation of one of the most celebrated fantasy novels in the last hundred years. I had mixed expectations.

Well, I saw it. If you want to know what I thought, click on. Be warned: lots of details about the film, just so you know. Might spoil this adaptation of a 75-year-old book.

Are you sure you want to know what I thought?

So, anyone want to buy my comic, written by Ross Leonard, published by Black Hearted Press?  Well, now you can, if you're lucky enough to live in one of the countries which BHP ships to! 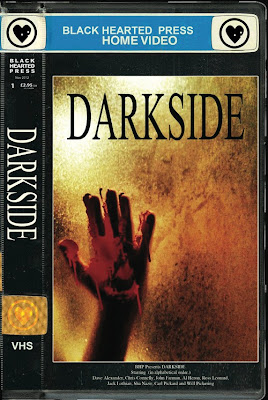 Darkside is an anthology horror comic collecting tales of the macabre, the unexpected, the transmundane, and other such descriptive terms, ranging from stories set in the writers' native Scotland, to faraway lands of ill-defined locality, from modern times to the untold past, and so on and so forth. My story, "Kalina and the Baba Yaga," is a fairytale with a somewhat modern twist on it, as the classic Slavic folk legend has a bit of a Scottish makeover. Of sorts. Kind of. It's difficult to describe exactly what it is, but I loved Ross's idea and couldn't help but throw myself into it.

My experience with Ross has been incredibly gratifying and assuring. Not once did I have reservations or any sort of significant disagreement with the direction, composition or execution of the comic or story, and he seems very satisfied with the results. I'm very lucky to have worked with such a clever, intelligent and erudite individual who gave me the boost I needed simply because he thought I could do it. Since then I've taken on two very cool - and very different - projects that aren't comics, I will definitely work with Ross again in the future, I'm seriously considering a fourth proposition, and I have others in the pipeline. Better not spread my butter over too much bread, though! 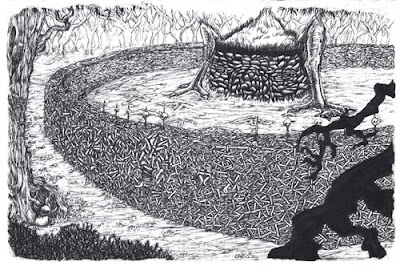 You can find some previews of my work on "Kalina and the Baba Yaga" here and here. I'll eventually get round to that report on the comic launch: I'd been holding off because I was afraid of stealing someone else's thunder, but I figure they won't mind. In the meantime, have another Barbearian.

"I am king, state, and law!" he roared, and seizing the wand-like sceptre which lay near, he broke it in two and flung it from him. "This shall be my sceptre!" The toy axe was brandished aloft, splashing the pallid toys with drops of jam. Kub gripped the plastic crown with his left hand and placed has back against the wall. Only that support kept him from falling but in his arms was still the strength of cuddly lions.

"I am either king or cuddler!" he roared, his corded stuffing bulging, his button eyes blazing. "If you like not my kingship - come and take this crown!"

The fluffy left arm held out the crown, the right gripping the menacing axe above it.

"By this axe I rule! This is my scepter! I have struggled and sweated to be the puppet king you wished me to be - to king it your way. Now I use mine own way! If you will not play, you shall obey! Laws that are just shall stand; laws that have outlived their times I shall shatter as I shattered that one! I am king!"

Slowly the pale faced noblebears and frightened teddies knelt, bowing in fear and reverence to the jam-stained giant who tottered above them with his eyes ablaze.

You may remember I gave Stewart Lee a tough time of it a while back, which amounted to a hill of beans. Well, I have good (Scot) news and bad (Scot) news.