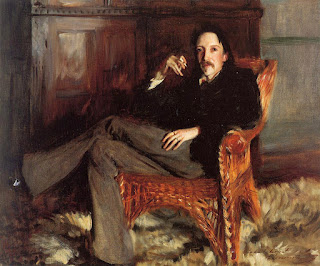 Well, if you want to get technical, it isn't for a wee while yet. Mr Stevenson legally waived all rights to 13th of November as his birthday to a Ms Annie Ide:

Most of us -  especially when we are young-look forward to our birthday each year. Greeting cards arrive in the mail. There may be some exciting presents and perhaps a party with friends. It's a special day and it's fun to be the center of attention.

But suppose that special day happened to come on December 25, the biggest holiday of the entire year? Noone would even notice an ordinary birthday in the middle of Christmas.

Annie Ide of SI. Johnsbury had just such a birthday. Annie was born in 1876 and when she was fifteen her father went to the island of Samoa in the South Pacific.  There he met Robert Louis Stevenson, the famous author of Treasure Island. The two men became good friends.

One day Annie's father told his friend that because his daughter was born on December 25, she had never had a real birthday celebration. Stevenson offered to give his birthday to Annie so she could have a day all her own. He mailed her a document that said,

"I, Robert Louis Stevenson, ... have attained an age when, 0, we never mention it, and... have no further use for a birthday of any description... do hereby transfer to... (Miss) A.H.Ide, all and whole my rights and privileges in the thirteenth day of November, formerly my birthday, now, hereby, and henceforth the birthday of the said A(nnie) H.Ide, to have, hold, exercise and enjoy the same in the customary manner, by the sporting of fine raiments, eating of rich meats and receipt of gifts, compliments and copies of verse, according to the manner of our ancestors."

Well, while I'm sure Annie enjoyed every 13th of November of her life, it would be a most diminished world if only one person could claim a day for their birthday, wouldn't it? I have a post over at DMR books talking about three of Stevenson's most important works, and how they affected me personally.

Uttered by Taranaich at 23:38 No comments: