The Phantasmagoria Metallique: 100 Years of A. Merritt's "The Metal Monster" 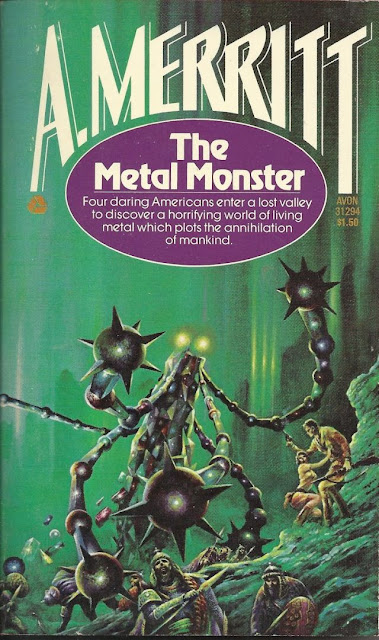 Sphere and block and pyramid ran together, seemed to seethe. I had again that sense of a quicksilver melting. Up from them thrust a thick rectangular column. Eight feet in width and twenty feet high, it shaped itself. Out from its left side, from right side, sprang arms—fearful arms that grew and grew as globe and cube and angle raced up the column's side and clicked into place each upon, each after, the other. With magical quickness the arms lengthened.

Before us stood a monstrous shape; a geometric prodigy. A shining angled pillar that, though rigid, immobile, seemed to crouch, be instinct with living force striving to be unleashed.

Two great globes surmounted it—like the heads of some two-faced Janus of an alien world.

At the left and right the knobbed arms, now fully fifty feet in length, writhed, twisted, straightened; flexing themselves in grotesque imitation of a boxer. And at the end of each of the six arms the spheres were clustered thick, studded with the pyramids—again in gigantic, awful, parody of the spiked gloves of those ancient gladiators who fought for imperial Nero.

For an instant it stood here, preening, testing itself like an athlete—a chimera, amorphous yet weirdly symmetric—under the darkening sky, in the green of the hollow, the armored hosts frozen before it—

Today marks the 100th anniversary of the publication of A. Merritt's "The Metal Monster," one of my very favourite weird tales and a truly remarkable work of science fiction.

Pal of the Blog Deuce Richardson very kindly hosts my exploration of just how rich and expansive the story's links to modern science fiction are.

For such a visual feast, there's remarkably little illustration out there for "The Metal Monster." Stephen Fabian's cover art for the 1976 Avon Books publication (pictured at the top of the post) is a bit closer to the modular, weird nature of the Monster, but there are some other interesting ones out there.