Just in case you think I'm being overly negative... Part the Second

It's rare that I come across a review of something Howard-related that I have no problems with, but Stacy Dooks of Wild Gunmen has done just that.  What an eloquent, accurate, all-round-great overview.  In particular, this is quite possibly one of the best analogies regarding Howard's impact on the fantasy canon that I've ever read:

If you’re a fantasy fan and you’ve never read Howard, you’re the equivalent of a rock fan who’s never listened to Jimmy Hendrix.

That's it.  That is the analogy I've been looking for.  Howard is the Jimi Hendrix of fantasy.

The comparisons are there. Both artists' work was very popular while they were alive, but only became widely recognized as geniuses until after their deaths.  Both artists' work spanned beyond any one genre, producing pieces of frenzied mayhem, melodic power and technical brilliance, as well as amazing gentility.  Both artists' work have origins in what contemporaneous artists were doing but their sheer talent forged those disparate elements into something new, unique, and never recaptured. Howard took the historical milieu of Lamb & Mundy, the horror of Poe & Lovecraft, the adventure of Burroughs & Haggard and his own inimical talent and themes to create Sword-and-Sorcery; Hendrix took the extended solos of Eric Clapton, the amplified feedback of The Who, the blues stylistics of Muddy Waters and Howlin' Wolf, and his own sense of style to create one of the formative sounds that would become Heavy Metal.

The pair's life is also corroborative.  Both have had episodes of their lives exaggerated and warped, usually by their critics, to give the impression of insanity or recklessness.  Heck, both even had iconic headgear (Howard with his cap, Hendrix with his headband).  I could even see the UK comparisons: Howard's only really popular in the UK for Conan and, recently, Solomon Kane, while Hendrix's only Top 40 tracks were "Voodoo Chile" and "All Along The Watchtower."

Two artists in different fields, who are yet comparable because of their impact, influence and power.  Thanks, Stacy: just what I was looking for. 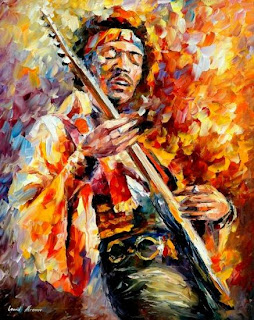