Finally, after such a glut of auteur cinema, let’s wallow in some trash with Solomon Kane (Entertainment In Video) a throwback to the sword and sorcery epics that were popular during the 80s (indeed the film is based on a character created by Robert E Howard, best known for bringing Conan The Barbarian to the printed page). James Purefoy is all hard-nosed and gravelly as the titular character,  a formerly murderous sea captain now looking for redemption. But when the Devil comes for his soul, a battle ensues that will see Kane attempt to save the world. It’s gloriously silly and whilst films like this are ten-a-penny nowadays there’s a certain pulpy nostalgia that makes it throwaway fun.

Said auteur cinema included the likes of Todd Solondz, Pia Marais, Eric Rohmer and Glauber Rocha.  The Solondz films I've seen are belligerent, childish nonsense and Rohmer's a pale shadow of Godard and Truffout (who I'm not really a fan of myself).  I have no idea who the other two are, so it would be boorish of me to assume they're pretentious, self-indulgent exercises in cinematic onanism... so I won't.

I will, however, ask Mr Laurence exactly where he's found these ten-a-penny films just like Solomon Kane. Crom knows I'd love to find them. Most films of this genre are relentlessly dire with no sense of worth or self-respect, and I'm guessing our good friend Mr. Boyce is just watching the film with his mind turned off (if indeed he even bothered to tear himself away from his precious French Masters to watch the film at all).  Unless Laurence is lumping Solomon Kane in with the likes of Mishmash of the Cretins or The Crass Error-Blender, I can't say I recall a single Sword-and-Sorcery film as good as Kane, or even fantasy at large: certainly not in recent memory.

I guess Laurence and I are just very different people. We weren't always.  I was a cinema snob myself when I discovered Kurosawa, Fellini, Bergmann et al as a teenager.  I grew disdainful of popular culture's choices of great cinema.  I was an insufferable prat.  But then... I grew up.  I stopped caring about what "real" cinema was, and went purely by what spoke to me.  Such experiences ranged from independent films to big-budget blockbusters, foreign oddities to exploitation extravaganzas.

It's hard to really criticize divergent opinions like this, especially since I was once like Laurence.  So, just as I'm content to wallow in my Sword-and-Sorcery "trash," I'll just let him wallow in the pseudo-artistic quagmire of eccentric directors' creations that he prefers.  In the end, we're all pigs in slop with aspirations of genius: hopefully Laurence will saunter into my pen, and find something he likes in the mud.  Maybe then he'll see the good parts of Solomon Kane that far outstrip other films of the genre, and so inspire a friendly arachnid to write "Some Movie" in spidersilk in a barn corner.

Or he'll just turn his snout up proudly and swing his porcine behind in my direction, as I can only look on with a mixture of pity and indifference, while he snorts and squeals the subtleties of his magnificent muck while all the pigs in the farm nod in sage approval.  Then I turn and return to the honest, uncomplicated, but rich mud I love, and roll and frolic like I've done all my life. 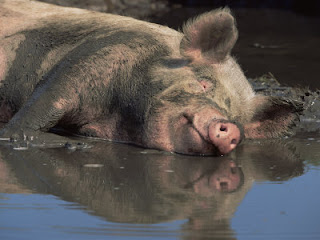