The Wind in the Willows: A Tale of Terror 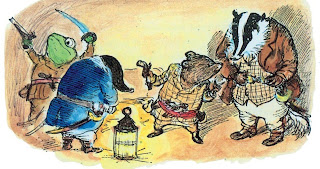 I can't believe I missed this, but back in June, it was announced that WETA would be producing a new adaptation of The Wind in the Willows!

The Wind in the Willows is one of my childhood favourites.  All of the characters spoke to an aspect of my personality: Mr Badger for his incongruous gentility despite his gruff exterior, Ratty for the loyalty and dedication to friends and family, Mole for the shyish kindliness and desire for adventure, Toad for the wild manias and obsessions that sometimes afflict him.  The story really spoke to me in so many ways.

I grew up with a few adaptations.  Despite the sweeping alterations to the source material (yes, even as a tiddlypeep I was a gigantic pedant) I fairly enjoyed The Adventures of Ichabod and Mr. Toad.  God help me, I even enjoyed the Monty Python car wreck that was Terry Jones' The Wind in the Willows.  However, the Cosgrove Hall The Wind in the Willows will be the one to beat (and the TV series wasn't too bad either, all things considered).

Already we have a trailer, before there's even an IMDB or Wikipedia page.  It starts off very ethereally, a bit dark, perhaps a bit Terry Gilliam-esque with Danny Elfman-inspired music: not too bad. It sounds like it's going to be a good bit less whimsical and a lot more surrealistic than previous adaptations, but hey, I'm up for that.  There's certainly some dark stuff in the book: Toad's incarceration, the weasels, the pagan mythological elements.  I could deal with it.

Until we see Mr. Toad. 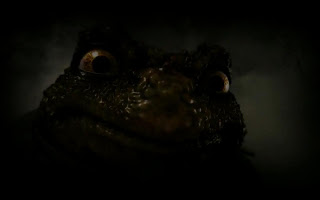 I saw its bloated, repulsive and unstable outline against the moonlight and set in what would have been the face of a natural creature, its huge, blinking eyes which reflected all the lust, abysmal greed, obscene cruelty and monstrous evil that has stalked the sons of men since their ancestors moved blind and hairless in the treetops. In those grisly eyes were mirrored all the unholy things and vile secrets that sleep in the cities under the sea, and that skulk from the light of day in the blackness of primordial caverns. And so that ghastly thing that the unhallowed ritual of cruelty and sadism and blood had evoked from the silence of the hills, leered and blinked down on its bestial worshippers, who groveled in abhorrent abasement before it...

Ok. Ok. Let's not panic. Mr Toad just looks like he's possessed.  He's staring into the darkest recesses of my soul, ravening for delight at the morsels residing in my brain.  Still, Toad wasn't exactly the most well-adjusted of individuals, so perhaps giving him an edge will be refreshing.  Maybe this is just meant to give the impression of dark whimsy rather than unholy terrors of nightmare and lunacy.

I want my mum.

*In case anyone can't place the text, it's from Robert E. Howard's "The Black Stone."  It's the first thing that sprang to mind.
Uttered by Taranaich at 10:02