A Horrible Thought: A "Conan" Novelization?

Damnit, Mikey, how could you raise such a hideous spectre?

I just had an interesting thought! Will there be a novelisation of the new movie? And if so, who do we think should write it?

My number one suggestion: Christa Faust. Anyone who can turn a joke movie like Snakes on a Plane into a rivetting read is bound to do a good job with whatever material is handed to her. Her Gabriel Hunt adventure "Beyond the Frozen Fire" shows she has a great feel for pulp adventure.

Another thought: How about Michael Moorcock? He's done novelisations before (The Great Rock 'n' Roll Swindle) and has recently turned out a Dr. Who book. Or would this be the final straw on his camel's back for Howard fans?

And finally, what do we think about Ramsey Campbell? Having done the business for Solomon Kane, would he be looking for another gig?

I'm sure you can guess what I think of the very idea of a "Conan" movie novelization.

Still, let's entertain the idea.  If they get someone who really knows Conan - really knows him - and who can shock the world by making the film somehow fit in with Howard's creation, then that might be kind of cool.  It won't happen, though.  An alternative is one where someone just doesn't care, and tries to make the film as trashy and silly as they can.  Better to be hilarious than to be dull.

That said, there are some people who must, under no circumstances, come anywhere near a "Conan" movie novelization: Michael Moorcock is one of them.  Now, I like Moorcock's work, but the guy doesn't know Conan, he doesn't know Howard, and any resulting work by him will be... well, I won't like it.  Luckily, I think he has sufficient clout to turn it down, which I dearly hope he does.  Sadly, that just means it might go to someone like Arvid Nelson, Joe R. Lansdale, or... or... 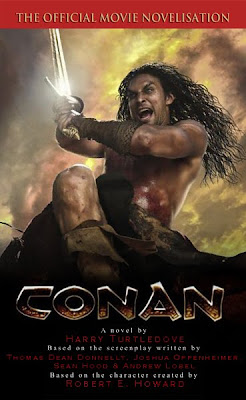 There's another possibility: instead of doing a novelization, we might end up with re-releases of the original Conan stories, this time with the film's paraphernalia plastered all over the cover.  This is more agreeable, since anything that gets more Howard out there is good.  Paradox would be idiots not to do this, plus it'd have the welcome side effect of doing Howardists' work for us.  "Why do we have such a problem with "Conan"?  Read this."  So much easier. 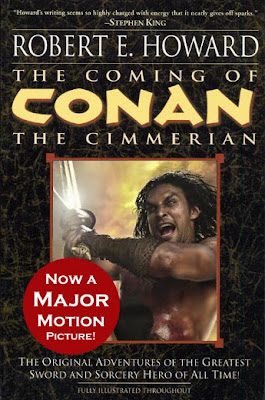 I can only pity the poor people who somehow enjoy the film being disappointed when they learn that Khalar Zym, Tamara, Corin, Islene, Marique, Ukafa, Artus and every single character apart from Conan doesn't appear, Conan's people weren't actually wiped out, his parents are never killed, he never goes to Khor Khala, and that everything that happens in the film amounts to Sweet Fanny Adams in the original stories.
Uttered by Taranaich at 00:01