Agnes the Barbarian, and Robert E. Howard on the stage

Conan parodies are a mixed bag. They've appeared in film, comics, cartoons, literature, even new media, all running the gamut of inspired to asinine.  It seems every sort of media has some sort of Conan parody.

A kingdom in Peril! A King in the clutches of evil!
Horrible monsters; inter-personal family dynamics!
Who better than Conan the Barbarian to venture forth and combat these calamities?
His daughter, Agnes - that's who!
The Thunderbird Theatre Company presents:
"Agnes the Barbarian"
What could be worse that having an overbearing father who just doesn't understand you? How about an overbearing father who just doesn't understand you...and who also happens to be Conan the Barbarian! Worried that their plain, bookish daughter lacks what it takes to be a true barbarian, Agnes' parents force her to go on a quest to prove her worth as a warrior. Meanwhile, a treacherous plot is underway to steal Conan's throne and destroy the kingdom of Aquilonia.
Now in its twelfth year, The Thunderbird Theatre Company presents "Agnes the Barbarian" written by Jason Harding, author of the pirate comedy "Lusty Booty" "Agnes" is an original play that is part homage/part lampoon of the sword \& sorcery genre. A story of comedic high adventure, in the same vein as past productions such as "Aaron Trotter and the incident at Bikini Beach", "Pride and Succubus" and "Aaah! Rosebud."
"Agnes the Barbarian" opens July 30th and runs each Thursday through Sunday until August 14th. Produced by the Thunderbird Theatre Company, the play is being performed at San Francisco's EXIT Theatre, 156 Eddy Street San Francisco 94102.
All performances begin at 8:00p.m. 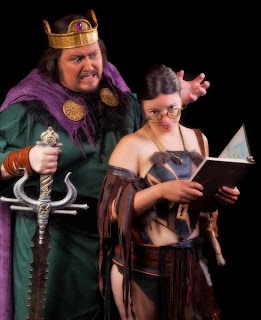 To begin with, I was wary.  I've seen my fill of mindless Conan "parodies" that poke fun at the films (which reached its peak with Groo the Wanderer and never really got any better) and I would've hated for this to be all about the Big Dumb Barbarian pop culture's done to death for the past 20 years.

So, I got in contact with Thunderbird Theatre Company, asking for more information.  To my delight, the playwright Jason Harding wrote a reply, and while it didn't allay all my fears, it did a good job explaining what the play is about.

The jist of the play is that it's a character-based comedy based on father and daughter relationships, with a few little twists the Sword-and-Sorcery genre can capitalize on.  The normal tropes of rebellious teenage girls staying out late, hanging around with the wrong crowd and dressing in inappropriate clothing causing no end of problems with straight-laced, conservative parents are inverted: Agnes is bookish, sheltered and clad in generally drab attire, rather the opposite of what a stereotypical barbarian girl would be like.  With the trials of middle age taking its toll on Conan's mind and body, he sends Agnes out on a quest to make her a "proper barbarian", where eventually father and daughter learn from each others' mistakes and about themselves in the process.

Well, first of all, my attention went straight to the depiction of Conan in the play.  In "Agnes," Conan is a balding, paunchy man trapped by the maddening bureaucracy of courtly life, starting to worry about his deteriorating condition, and his mid-life crisis starts to subconsciously affect his relationship with his daughter.  He sees Agnes stuck in books, talking to her friends about politics, and being pretty much "non-Barbarian", and decides something ought to be done.  Obviously, I can't see Conan letting himself go in such a way, even as king (though the thought occurred to Milius, as seen in King Conan: Crown of Iron), and I certainly don't think he'd have a problem with Agnes talking politics: he might even join in with her debates!

However, Jason explained that this is sort of an "alternate universe" Conan, in the hallowed traditions of DC's Elseworlds.  In this way, other Sword-and-Sorcery properties could be parodied: The Lord of the Rings, Hercules, Dungeons & Dragons, that sort of thing.  Unpronounceable monster names, cults with weird ideals and membership benefits, baffling rites of passage - it all seems rather Terry Pratchett.

All that's really left for me to question is the use of Conan and the Hyborian Age at all.  Jason says that it's ultimately because the public is familiar with Conan.  I still think it would've been better if he changed the character's names and the setting.  Still, it's good to know that there are better intentions at work than the Seltzbergs of the world, so hopefully this'll be a comedy we can all appreciate.

Best of all, Jason will be including a short "about REH" in the program: it's short and sweet, and free from the ravages of DeCampisms.  As with Solomon Kane, anything which brings more people to the world of Robert E. Howard is a good thing.

It also occurred to me that I'm not aware of any REH stage adaptations.  Obviously the grand fantasy epics like The Hour of the Dragon would be a bit of a stretch, but what of his more intimate horrors?  There's been a film adaptation of "Casonetto's Last Song," which is ideal for a small theatre production.  Just open The Horror Stories of Robert E. Howard at a random page, and you'll probably find a story that can be adapted quite easily to stage.  "Pigeons from Hell," "Dig Me No Grave," "Old Garfield's Heart," "The Shadow of the Beast," "The Haunter of the Ring" - I can see it.

What about Conan?  I'm of the opinion that opera is a great medium for the Cimmerian - and surprisingly, Jason brought it up in our correspondence.  I guess I'm not insane!  "Queen of the Black Coast" would be my choice: full of the turmoil, passion, horror, tragedy and ecstasy that you get in such productions.  Conan could be a tenor, baritone or (if the composer is brave) basso, Belit would work as soprano, parts like N'Gora & N'Yaga could be expanded, with the Winged One having a mighty basso profundo.  The style would be a fusion of Celtic and African, with some Wagnerian bombast for flavour.

The beauty of Conan is his globetrotting exploits could allow for whole new realms of music for inspiration: "The People of the Black Circle" with Indian music styles, "Black Colossus" a duel between European and Middle-East,  The Hour of the Dragon with more traditional grandiose themes mashed up with French, Spanish, Italian and ancient Egyptian elements.


The more I think about it, the more surprised I am that Conan & REH haven't come to the stage before.
Uttered by Taranaich at 23:09