Another new look at Conan the Momoan (® Miguel Martins)

This time courtesy of Waldgeist's Conan Movie Blog, via BvTcH3r (the hell?) at the Robert E. Howard Forums. 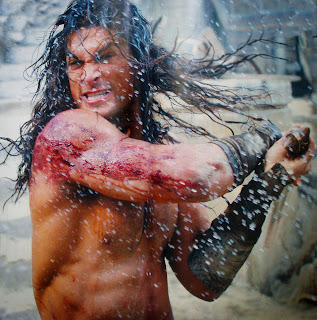 Far superior to the most recent photoshopped-to-all-hell shot, but not as good as the first official shot.  Still, his hair looks a lot darker: might be due to the moisture, or Waldgeist's clean-up process.  At least he looks savage and barbaric enough, even if I still think he could've done with a bit more time at the gym.

My question is, why the hell are the Bulgarians and the French getting all the new info when this is an American film production starring an American actor as an American creation based on the work of an American author?  You poor Yankees can't catch a break.  If there isn't something at Comic Con, then they'd better do something damn special sometime this year if they want people to care about the film when it comes out.  Case in point: Thor is coming out at roughly the same time as Conan is projected (Summer 2011) and it not only has an official still of Hemsworth in costume as the God of Thunder, we have interviews with the cast and directors, behind-the-scenes videos from the set, and know plenty about the film's crew.  We know next to nothing about Conan's crew.  We don't know who's playing the roles of Lucius, Fassir & Ilira despite their important roles in the script - and if they've been excised, then we should at least know why.  Principal photography has wrapped, but we don't even have a proper, officially released still from Millennium/Nu Image/Lionsgate.

Bunch of chuckleheads, the lot of them.
Uttered by Taranaich at 00:01