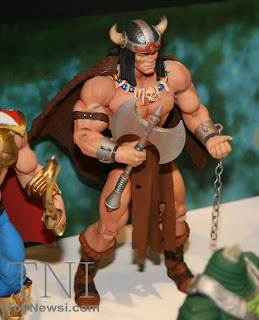 I saw this over at the Robert E. Howard Forums, and had to mention it here.

Mattel has introduced Vikor, He-Man of the North which is based off the original designs from the 80's:

There's a frost giant also coming from Hasbro which should be a little taller than Co...err I mean Vikor:
http://i.marvelousne...ize=600&start=0 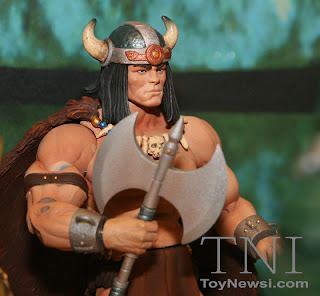 Seriously cool. That looks very close to John Buscema's Conan, to my eyes.

Now, before anyone brings up the "was He-Man originally meant to be Conan, but Mattel blenched at the violence and sex, and so made He-Man instead"?  Well, the truth is rather more complicated, but the redoubtable Paul Herman (who sent me an awesome gift that'll be showcased on the blog soon) has long since settled the score.  So, here's the real story of the Conan/Mattel controversy.

It's a source of frustration to me that there aren't that many Conan action figures.  Sure, we have the plastic statues from McFarlane (which I respect on its artistic merits, but find a greatly missed opportunity), the Marvel Legends figure with Wraarl (seriously, no Thoth-Amon?) and oddities like Mego and the Conan the Adventurer tie-ins.  But there's just something to be said for the simple articulated action figure for the child to engage with.  My wee cousin often laments the lack of Conan action figures they can play with, and I'm sure there are a few REH parents out there that might find an action figure a great way to bridge the gap between generations.

In the meantime, I'll post some of the cooler customised Conan action figures I've seen. 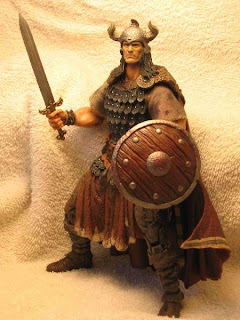 A more articulated version of Todd McFarland's Conan.  This was the only McFarlane figure I liked, because it does look like the sort of thing Conan would wear, especially a "Queen of the Black Coast" era Conan.  Presumably this is after Conan got the Nordic helm, Ophirean cloak & Kothic scale armour, but before he got the Kothic greaves, Nemedian ring-mail and shagreen belt.  I guess he lost the shield on the way. 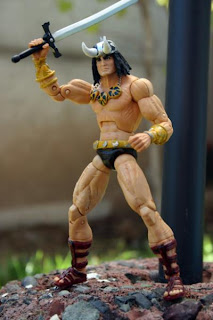 Conan as he appeared in the very first Conan comic, drawn by Barry Smith, very finely rendered in action figure form by Satanaz.  Barry's Conan struck me as a little bizarre, not least due to the eclectic necklace and unusual helm design, but it's very recognizable, and easily distinctive from, say, Buscema's.  Speaking of which... 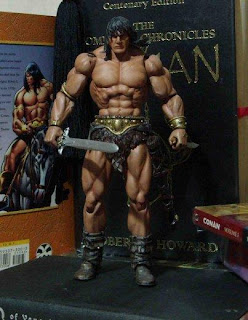 Conan as depicted by John Buscema, custom made by jessecuster.  I particularly love the Centenary Edition in the background, as well as the comparison pic from one of the Chronicles of Conan volumes. 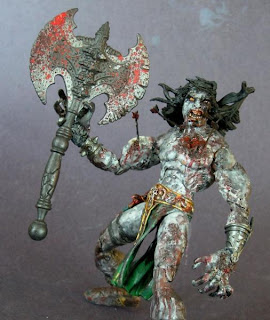 One of the weirder phases Marvel went through was their Zombie period.  Where everyone became zombies.  Zombie Spider-Man, Zombie Captain America, Zombie Hulk.  Well, I guess this is self-explanatory.  I can imagine some foolhardy necromancer bringing the corpse of Conan to life as his enforcer, but even in death I suspect Conan would resent being used in such a manner... 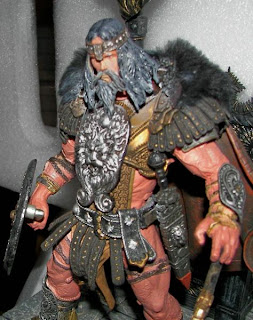 King Konahn. OK, it's inspired by the movie, but I think it's neat nonetheless.  It's pretty close to how I imagine the fuddling spineless idiot in Crown of Iron to end up (or perhaps the poor deluded soul in my as-yet-unfinished masterpiece Rey Konahn, Payaso del Hierro.) The vast majority of Conan customs are film-based, but this is the most interesting out of all of them. 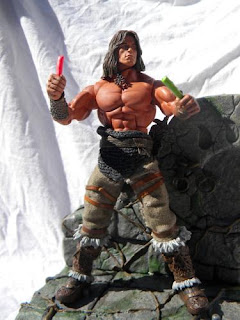 And, just for fun, Conan the Ravearian!  (For those in the dark, illuminate thyself)  Incidentally, this is one of the most convincing customs I've seen, and if some action company decides to actually go for Conan movie action figures, they could do far worse than this as a basis. Also incidentally, the base figure used here was... Triple H, who is one of the most favoured contenders for the role of Conan for reasons that utterly mystify me.  (Seriously, he's muscular, and that's it.  Can't act, doesn't actually look like Conan facially, he's too old now...  Why do so many people want this guy for Conan?)
Uttered by Taranaich at 02:03