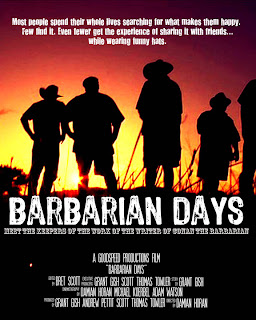 Every year, fans flock to tiny Cross Plains, Texas to honor the the literary works of the town's most famous resident: Robert E. Howard. The acclaimed pulp writer is known for creating such characters as Conan the Barbarian and Kull the Conqueror, and the spirit of those characters live on through Howard's fans who find hope in his pages and unity in his memory.

It's essentially "The Howard Days Story," which sounds absolutely brilliant.  The first REHupa trip to Cross Plains, which would become "Howard Days," will be celebrating its 25th Anniversary, so it's a pretty great time to do a retrospective.

EDIT: For some reason I persistently think it's the 25th Anniversary of REHupa, when it's actually the 38th.  Mitra protect me from my own numbskullery, and eternal thanks to Rusty for patiently correcting my nonsense.
Uttered by Taranaich at 03:49