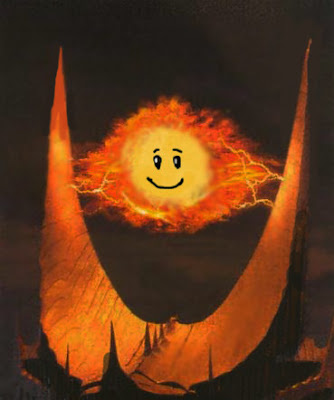 What, me evil?
I'm not kidding, this is actually an argument put forward by Cezary Jan Strusiewicz.  One could argue that, since it's on Cracked.com, it shouldn't be taken too seriously - but then, every other "famous movie villain who was right all along" on the list had compelling, reasonable and logical arguments.  So why shouldn't we believe the argument that Sauron was the victim of a terrible smear campaign was similarly made in all honesty? According to Strusiewicz, Sauron, the enemy of freedom, peace, love and anything good, was just misunderstood.

Just so you can understand the immensity of insanity, I'm going to post the segment in its entirety here, and address it.

Oh, come on. Sauron is like the archetypal evil overlord. He's got massive armies of monsters. He has a flaming eyeball. He has a helmet made of spikes, people, come on. And, he did... you know, he did all of those... things. And...

Hold on a minute there:

And what exactly? Please tell us, because throughout the entire 2000-hour run of the Jackson trilogy, we couldn't find a single reason why everyone demonized Sauron like he was a debt-collecting pedophile. Yes, he was building an army to advance on Middle Earth. But who was in that army? What were they fighting for?

This was a world where Orcs were used as target practice among elvish communities. The elves loved that shit. Sauron put a stop to that by offering all the underprivileged creatures a place in his non-race-exclusive army (the only nonsegregated force in Middle Earth other than the Fellowship), with promises of their own country in the future. After what he did for the orcs and the goblins, Sauron was just some towering, mace-wielding folk hero.

Of course the humans and elves couldn't have that, because if orcs moved-in next door to them, their houses' property value would go down. After all, these creatures are dark and smelly and have weird voices. They must be murdered on sight.

We hear a lot about freedom, and the free peoples of Middle Earth standing up to Mordor. What do we mean by "free?" They're certainly not fighting for Democracy -- each kingdom is a monarchy where the people have no say over what the leader does as long as that leader possesses the right genes. And overwhelmingly it seems like what those leaders like to do is shit on the Orcs, and the countless other minorities who Sauron was able to recruit onto his side.

What you were seeing in these films was not an unprovoked act of aggression, undertaken just for the hell of it. You were seeing generations of pent-up frustration by oppressed minorities, harnessed by a leader they could get behind. What Sauron did was nothing more than try to cut out a piece of that Middle Earth dream for himself and his followers, and find land that doesn't require them to live under a continuously erupting volcano.

His methods were violent and there were excesses -- as you see in every revolution. But if Middle Earth doesn't take a moment to understand why Sauron was able to draw tens of thousands of disenfranchised individuals to his cause, then they're destined to fight the same war all over again, as soon as the next Sauron shows up.

I.  I got nothing, folks.  I mean, is there any point in arguing that Tolkien explains exactly why everything he says is nonsense?  But then, someone will argue that that's the books, that the film doesn't show Sauron doing anything evil. To which I would also call balderdash.

Please tell us, because throughout the entire 2000-hour run of the Jackson trilogy, we couldn't find a single reason why everyone demonized Sauron...

Well I can think of a few things.  I'm going just by what happens in the films, mind:

Sauron - in disguise - created twenty rings of immense magical power which he gave to the most powerful people of Middle-earth.  What he did not tell them is that those rings were mind-control devices, and that anyone wearing said rings would be under the power of the Master Ring - Sauron.  Nine of these leaders, who were kings, were transformed into horrific undead ghosts, forever enslaved to his power.  Deceiving and brainwashing people in a bid to take over the world isn't evil?

Once this happens, Sauron begins a conquest of Middle-earth ("one by one the free lands of Middle-earth fell before the power of the Ring") which was only halted by an alliance of the Elven kingdoms and Numenor.  Sauron, like his master before him, uses his genetically engineered slave army against his foes.  Armies which, following his destruction, devolved into chaos and anarchy, without a leader.  Breeding an entire race as a slave army isn't evil?

Oh, and as if you couldn't guess, he brings up the "segregated army"silliness.  Because apparently deceiving, extorting, conquering and outright enslaving non-whites peoples is morally superior to willing allies joining forces for a common good that just happen to be situated in a part of the world where most people are white.  Because even if your army is multi-racial because they're slaves, that's still better than Mighty Whitey, right?

Overall, it's hard to get worked up about such an indescribably silly article.  I mean, forget reading the books, anyone who's watched the first five minutes of The Lord of the Rings: The Fellowship of the Ring knows the score.  Crazy.  Perhaps that's the idea, easy troll-bait from blustering Tolkien fans such as myself.  I note there are over a thousand comments on the article: no doubt it all played into Strusiewicz's hands.
Uttered by Taranaich at 00:01

Labels: Confounded Imbeciles, The Lord of the Rings, What In Blazes