Where on earth is Don Herron? 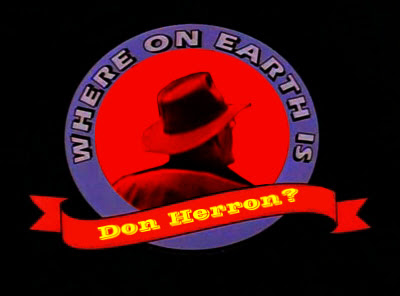 Don Herron's The Dark Barbarian was one of the things that truly made an impact on my leap into Howard studies, and I'd wager it did the same for many. Here, finally, was a critical anthology that put forth the idea of Howard's work being more than Puerile Adolescent Wish Fulfillment, that there was more to Conan than Juvenile Gordian-Knot Escapism, and more to the Man from Cross Plains than Maladjusted To The Point of Psychosis (ok, that's enough of those).

One of Herron's other seminal works, "Conan vs Conantics," was one of the first shots fired in the movement against including other authors' work on the same level as Howard's original tales. It's never really been surpassed. There are many other great Herron contributions to Howardom, so much that he can be safely considered one of the Great Howard Scholars. So why haven't we heard from him in such a long time?

Mostly he's occupied with his first, greatest love, Dashiel Hammett, continuing his tours and expanding his horizons on that front. However, just so we can keep up on his adventures, he's started a blog (thanks to James Reasoner for the link.) I'd love to see him return, as well as Leo Grin and other Howardists who've taken leaves of absence from Howardom. I doubt Howard, once experienced, ever truly leaves a reader.
Uttered by Taranaich at 00:01