I came across this rather interesting little snippet a while back:

"See," he says, "I really wanted to do 'Conan the Barbarian'. Oliver Stone, who is a friend, wrote it and wanted me to direct. But we had to get Arnold Schwarzenegger's approval."

The trio met for drinks to discuss the movie. "And wouldn't you know it," says Bakshi, "I had one too many scotches and offended Arnold by saying, 'Arnold, if I direct this picture, you have to lose weight. You're just too big.'"

Arnold was not amused, and John Milius got the job. "John called me up and thanked me for my stupidity. And of course, it was a bad picture because Arnold was just too big."

What makes this especially baffling is that Arnold did lose weight for the film, because his muscles were impeding movement.  Look at the difference between Conan the Barbarian's fight scenes, and those in Conan the Destroyer, and consider Arnold was pushing it in Barbarian already. It's somewhat perplexing that Bakshi would be fired for doing something Milius would end up doing anyway.

I'm not sure if that's poorly-translated sarcasm in the last sentence or not, but it would be silly to assert Conan the Barbarian was a bad picture purely on the fact that Arnold was already awfully big.

While Bakshi's obviously quite experienced in live-action filmmaking, he never seemed more at home than when he was doing animation. Well, I think we can all imagine what Ralph Bakshi's animated Conan the Barbarian would've been like: 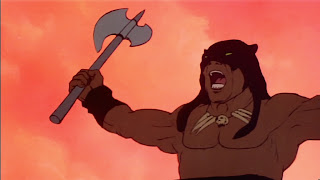