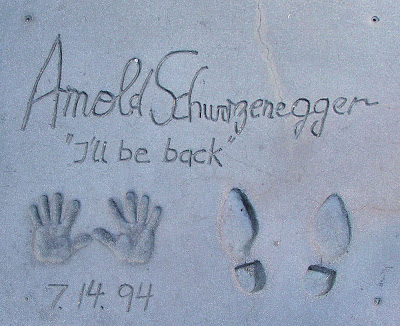 For seven long, excruciating years, we've waited for Schwarzenegger, now free of his Governor duties, to come back to the world of action films. Today we've heard the words we've been longing for, straight out of Arnold's own lips, that he's got three film scripts to consider; one of them being on our all-time drool list!
- The Arnold Fans, bless 'em

Sometimes you just have to go with the most painfully unimaginative title.  After months of speculation on his post-governor future, the inevitable return of Arnold Schwarzenegger to the silver screen appears to have been confirmed by the redoubtable Arnold Fans.

For a while now, I'd been simultaneously anticipating and dreading the possibility of Arnold's return to cinema.  Obviously, the big question in my mind is whether one of his new projects would be King Conan: Crown of Iron, a project I'm most assuredly not looking forward to.  Most worryingly, The Arnold Fans put it forward as a distinct possibility.

However, that film on the Arnold Fans' "all-time drool list" is not King Conan: Crown of Iron (thank Crom), but a World War 2 epic: With Wings as Eagles.

Arnold Schwarzenegger: "Currently I'm reading three scripts. One topic/script, which I considered a long time ago before governor, is delighting me particularly. In it I would play an older soldier, who gets the order at the ending of the war to kill a bunch of kids. But he doesn't do it and get them to safety at the risk of his life and it has all kind of adventure. This script is based on a true story!"

That's all Schwarzenegger had to say about the war script but TheArnoldFans.com can tell you more. The title: WITH WINGS AS EAGLES! With Wings As Eagles, written by Randall Wallace (Braveheart, We Were Soldiers fame) is based on the true life story about a German officer who does not agree with his surrounding Nazi party and instead helps the American POWs escape.

We have read the original 2001 script ourselves and it is epic in every way! This serious, gritty, action-packed drama is the perfect direction for The Oak to head in. Perhaps now is the time for Arnold to star in these more serious epic films instead of doing the comedies and popcorn movies. Arnold himself agrees that the Commando type of films may soon be best left behind him and that more serious roles should be considered.

Arnold Schwarzenegger: "In the future I have to adapt my roles to my age. Clint Eastwood also has done it in the same way. Extreme fighting or shooting is not possible anymore. I want to be more encouraged as an actor and I believe that I can manage this challenge. I am like a sponge, which is absorbing all the knowledge and always be willing to learn all new things."

Randall Wallace still wants Arnie to play Osterman one day. "Arnold can play the part well into his 60's" he says.

Naturally, the big question is WHEN can we see Arnold in theaters?

Arnold Schwarzenegger: "No idea. I don't have a fixed plan. First of all I have to decide which one of these scripts appeals the most for me, then there have to be the right director and so on. But the movie-making is a part of my future plans. Some day the waiting is over again and I'm looking forward to that."

Sounds interesting, and no doubt would cause much controversy given Schwarzenegger's family links to the German Army of the World War 2 period. I think the whole "Arnold's dad was a Nazi" thing massively overstated, of course, but it's interesting that he'd choose to go for a role that-

Wait, Randall Wallace?  The man who decided to turn one of Scotland's greatest heroes into a backstabbing opportunist who fought for the English at Falkirk and betrayed Wallace, deduced Wallace was the father of Edward III, and reduced the number of bridges at The Battle of Stirling Bridge by 100%?  The man who killed off D'Artagnan ten years early and revealed him to be Anne of Austria's lover, decided not to bother with Porthos' heroic and poignant death, and decided Louis XIV would be immortalized in French history as a "heroic, generous king" as opposed to an authoritarian warmonger?  The man who decided mucking about with one of the most powerfully affecting events in American history just wasn't cinematic enough, and muddled about the events leading to the attack on Peal Harbor?

Braveheart's depiction of the Battle of Stirling Bridge.  Not featured: Stirling Bloody Bridge.

Aye, I know I'm a history nerd, but between Braveheart, The Man in the Iron Mask (admittedly Dumas made his own divergences with history, but at least he never had an adult portrait of Louis XIV's grandson hanging on a wall in his books), Pearl Harbor and We Were Soldiers, you'll forgive me if I'm a bit skeptical about With Wings as Eagles' historical verisimilitude.

Ah, but what of King Conan?

Today the sound of millions of fans cheering over this news can be heard worldwide! We've waited a decade for Arnold to star in With Wings as Eagles. Arnold, please don't let us wait much longer to sign on the dotted line... unless of course you're considering your other two scripts: CRUSADE and KING CONAN!

Note, it isn't clear in the article whether the other two scripts Arnold is looking at are, in fact, Crusade and King Conan.  That said, given previous interviews with Avi Lerner - who's desperate to get Arnie back - and Arnold himself, I truly wouldn't discount the possibility of King Conan.  "But Al, surely the new Conan the Barbarian with Jason Momoa means there's no possibility for a new Conan starring Arnold?"

Oh, how I wish I could take solace in that.

EDIT: I neglected to make another point.  I genuinely think there's a possibility that Arnold will be in Conan the Barbarian 2011.  It may be a one-day cameo, or a CGI likeness, or just a voiceover, but the fact that the cast had been called back for reshoots only a few weeks ago combined with the announcement... well, I wouldn't be surprised that the reason this film is so under wraps is because Avi got his wish and nabbed Arnold for a cameo.

I dearly hope this isn't the case.  The film must do one of two things: establish the film as a new entity, or embrace its similarities to the 1982 film.  That's in addition to dropping this "faithful to the source material" charade that no self-respecting Howard fan could swallow.  Lionsgate simply can't play this game.  Either it's a new thing with no links to the original, or it is.  They can't dance about it.
Uttered by Taranaich at 00:26

Labels: King Conan: Crown of Iron, What In Blazes