Saoirse Ronan in The Hobbit?

Man, I am incredibly torn here. Saoirse Ronan in The Hobbit, likely as Itaril.

On the one hand, to Hades with Itaril. I already commented on this horrible character, but I just ask you to look at the description in its entirety:

ITARIL – female, A woodland Elf, this character is one the Silvan Elves. The Silvan Elves are seen as more earthy and practical. Shorter than other elves, she is still quick and lithe and physically adept, being able to fight with both sword and bow. Showing promise as a fighter at a young age, ITARIL was chosen to train to become part of the Woodland King’s Guard. This is the only life she has ever expected to live, until she meets and secretly falls in love with a young ELF LORD. This role will require a wig and contact lenses to be worn. Some prosthetic make-up may also be required. LEAD. AGE: 17-27.

This is Jackson/Walsh/Boyens fan fiction, pure and simple. For crying out loud, could this be any worse of an awful fan insert? I fully expect Arwen Mark II: a girl who's underestimated by The Man, yet manages to show more pluck and competence than half the men around her. Bonus points if her love with the Hot Young Elf Lord is looked down upon by her domineering, curmudgeonly father. 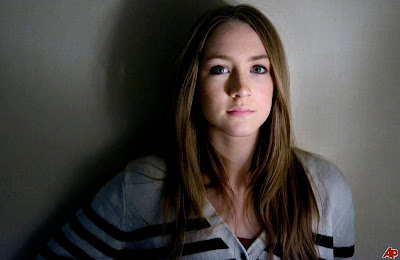 On the other hand... I really love Saoirse Ronan, even though I've only seen her in two films: City of Ember (an extremely underrated and under-watched post-apocalyptic film) and Atonement. I was struck by how accomplished and beguiling a young actress she was, far better than I was expecting. She's simply amazing, and I see her destined for greatness as an adult.  I really must try to catch The Lovely Bones, and, depressingly, I think I just missed The Way Back in the cinemas.  Anyone know a cinema still showing it in Scotland?  Anyone at all?

All said and done, if there's any young actress who could get me to grit my teeth through the nonsense of Itaril, then Saoirse may well be the one to do it. Now, if only they could get Ron Perlman for Beorn...
Uttered by Taranaich at 00:01

Labels: Ranting and Raving, The Hobbit, What In Blazes