Seven real eastern swords that would be cooler than Khalar Zym's

Double bladed, parallel scimitar.  That can break into a scythe.

I'm not including some of the beautiful historical curved swords like the Talwar, Yataghan or Shamshir, because I wanted to show that there are even more unusual weapons that would make visually striking arms in a Conan movie.

Well, obviously, I wouldn't be making this movie at all, but just because I'm stunned by the mere idea of a Double Bladed Parallel Scimitar, I think it's worth exploring the more exotic blades of the East which were actually used. 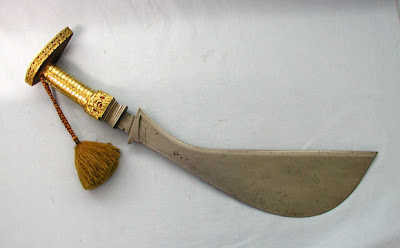 Also known as the Odi-Kathi, this is a sword with a two-foot blade found in Kodagu. I'm fascinated by its sheer breadth as it reaches the tip: it's less a sword than it is a butcher's cleaver. The lack of a guard and the unusual pommel add to its uniqueness, not to mention that flamboyant tassel for an added exotic touch.*

Like the Adya Katti, the Assamese Dao lacks a guard and gets broader towards the tip, but there the resemblances end. This is a straight sword rather than the curved one, and though it seems somewhat simple, the unusual shape of the blade adds enough character. 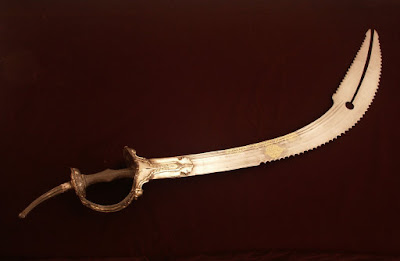 The legendary weapon of the Muslim leader Ali ibn Abi Talib, how can you not love a sword with a blade like a forked Serpent's Tongue? It would certainly tie in nicely to Set, or some other similarly serpentine deity. Of course, the biggest problem with its inclusion would be that it's a holy symbol of Islam, so it probably wouldn't be chosen. I just included it on the list because I think it's a fantastic design. 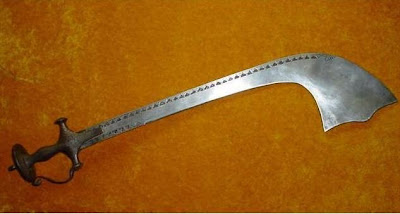 The Kora was a Nepalese/Northern Indian sword used both in war and in religious rites, usually sacrificial. The Sacrificial variety has a wider and heavier blade. Some varieties have disk-shaped cross guards and pommels, which would be quite unusual features. 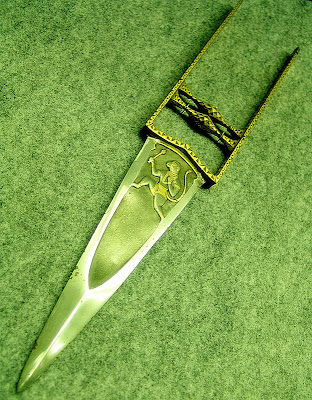 It's quite clear that the Indians are some of the most sadistically inventive warriors in history: not content with creating awesome swords, they've decided punching just wasn't bloody enough. No, they had to combine the action of stabbing with punching, to create a whole new verb involving this demoniac weapon. Best of all, there were three-bladed variants, where you had grizzled, blood-crazed warriors charging at their enemies with what amount to steel claws.  That's right, Wolverine was beaten to it by the Indians. 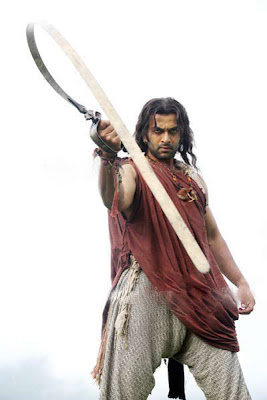 Essentially, a whip sword.  This would be unlike just about any other weapon I've seen in a fantasy film. While the lethality of the blade doesn't seem to be particularly effective against an armoured opponent, it's deadly against unarmoured ones. It requires tremendous skill to use without getting yourself killed, which just adds to its mystique. Kind of like a lightsaber, come to think of it.

Now here's a bit of a twist, since this technically isn't a sword: however, the idea of a shield affixed with two pointy things is just too great to resist. This was one of a variety of weapons carried by nominally non-violent holy men for self-defense purposes: they may not be able to carry traditional weapons, but there's nothing against carrying animal horns. Put two and two together... 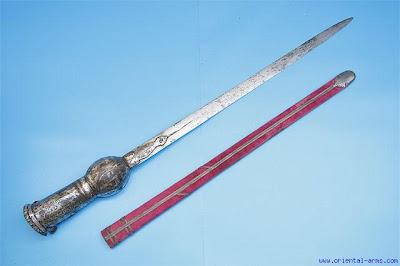 The Katar's bigger, angrier, choppier brother. If I had it my way, this would be Khalar's weapon. Just think: back in Mughal India, there were people running about hacking other people's heads and limbs off with these things. Like Indian T-1000s. While they appear to be largely anti-cavalry weapons, they can also be used in old-fashioned foot combat. Indeed, one of the coolest aspects of the sword is their flexibility allows them to be worn around the waist, like a belt. Imagine Khalar Zym, seemingly unarmed, whipping off his belt an brandishing it as a weapon.

And just for fun, let's see some of those swords in action. Obviously these videos are purely display-oriented, and probably a good deal more elaborate and flashy than in an actual battle context, but it does show how nimble and versatile they are:

*Thanks to Rajit for the clarification.
Uttered by Taranaich at 00:01