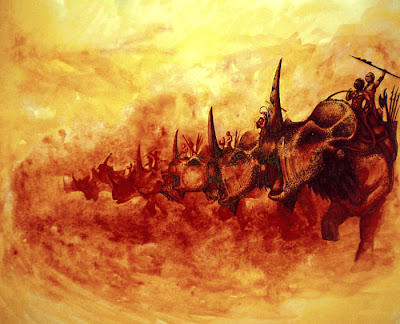 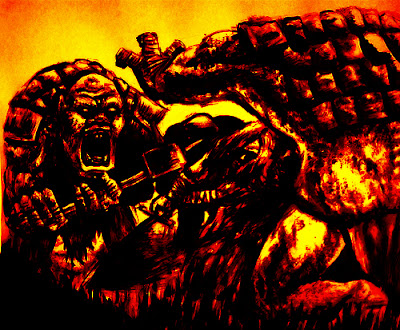 I know I have a serious problem with actually finishing series (just look at the Chronicles of Taranaich listed to the right), but starting a series that doesn't technically have an end seems the ideal way to have my cake and eat it. In short, I'm going to start posting some of my art on the 'net. 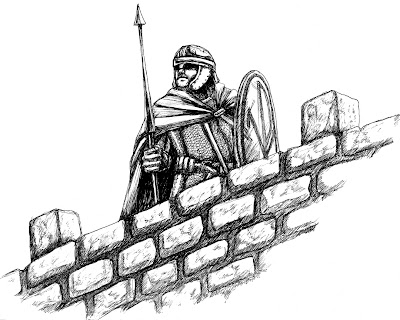 A lone guard watches the wall, inspired by a mysterious unnamed synopsis by Robert E. Howard set in Roman Britain

I'm a lot more reticent to posting my art than I am to posting opinions and writing: possibly because I'm very sensitive when it comes to that. Not in a sensitive-to-criticism manner, but rather a sensitivity to people actually looking at it. Art, like music and song, is a rather personal and intimate thing for me, and I always feel especially nervous sharing it. It tends to feel like I'm letting all and sundry look at a piece of my soul, and normally you should at least take me out to dinner and the pictures a few times before I'm ready to do that. 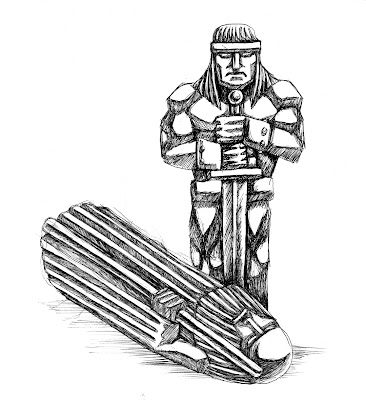 Pieces from the three-player board game of the "Ronaro" fragment

I feel immense envy of those artists who feel comfortable enough just posting doodles and sketches, or who can regularly draw and write with someone looking over their shoulder. This might be why I'm starting to get into comic art: it's a necessarily collaborative form between writer and artist, and so I don't feel quite as exposed. 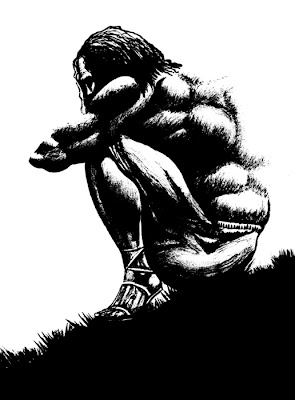 Our favourite Cimmerian in a more subdued, introspective moment

There's also a crippling self-consciousness (darn West-Coast-of-Scotland-Catholic-Upbringing!) which leads me to be, sometimes, inordinately hypercritical of my own work. I don't know if it's usual for an artist to be able to judge their own work in a detached, impersonal manner simply because of the very nature of art, but I know I sure can't: all I see are the things I feel I did well, and the things I wish I did, or could do, better. Constant unhelpful, subconscious comparisons to Frazetta, Dali, Caravaggio, Leonardo and legendary artists and how I'm somehow besmirching their memory by daring to trespass on their domain, that sort of thing. I'd like to think I've gotten better at this, but I don't think I'll ever truly overcome it. Perhaps I shouldn't: perhaps it keeps me grounded to a degree. 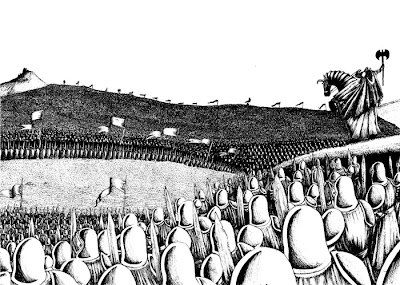 An old picture of the Battle of Tanasul, "The Hour of the Dragon." Ever the pedant, all I can see are the gaping divergences with the text (where are the Gundermen? Why does the Nemedian Army look like it's on higher ground? Why's Conan got an axe on horseback instead of on foot? Why's Xaltotun in the wrong place? Why do none of the banners have the Aquilonian lion or the Nemedian dragon? For shame, Al, for shame!)

But let's not get all maudlin: why on earth do I draw? Because I enjoy it. Ever since I was a baby Aly, I could be found scribbling madly with coloured pens on sugar paper, drawing anything that fired my growing imagination: dinosaurs, monkeys, parrots, haunted houses, foreboding castles, tall ships, pirates, lost treasure, krakens, shipwrecks on the shore of tropical islands, fantasy lands, dragons of all shapes and sizes, tortoises, fantastical animals. Childhood favourites He-Man, Orko, The Simpsons, Dracula, Robinson Crusoe, Long John Silver, Blackbeard, Santa, Professor Challenger and his expedition, Maple White's map and Stegosaurus sketch, Stuart Little the Starship Enterprise, alien planets and solar systems, alien beings and ships. A common theme was Noah's Ark, all the animals going two-by-two, Noah and his wife and children.  Another was a double-decker bus containing all my family members and loved ones: sometimes people got off the bus, others came on, the passengers changing over the years. My mother collected all of them, bless her, and they're still safely ensconced in a cupboard, many of them dated too.

Written & drawn before Grant Morrison's comic and that Doctor Who episode, and in no way influenced by that Voyager episode (Save that it makes efforts not to be a condescending allegory that tells a parable about scientific truth being obscured by archaic myth in a way that actually obscures scientific truth with archaic myth itself by perpetuating outdated fallacies and distorted history, but let's not get started on bad Voyager episodes...)

My choice of subject hasn't changed much at all. The details change, but that love of adventure, exotic locations, mysterious castles, heroic figures, awesome creatures, lost ages and more permeates and surrounds. I've also been studying the art of comics, reading up on the classics, comic criticism like Scott McCloud's Understanding Comics, and just exploring the medium. And then I just go back to illustrations, frequently black-and-white pen ones. Usually, of course, they're of Conan, such as the following scenes from "The Phoenix on the Sword," which I did for 80 Years of Conan: 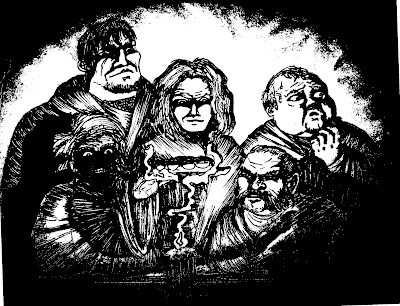 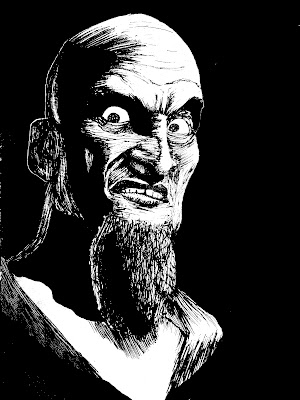 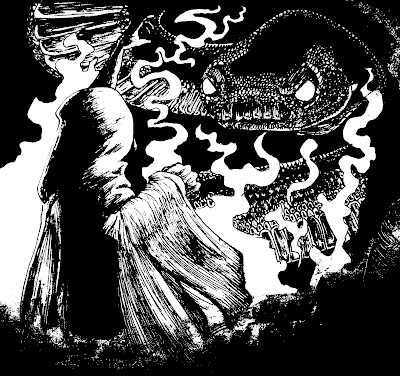 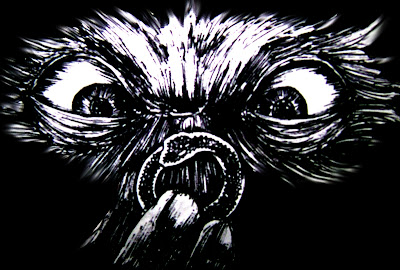 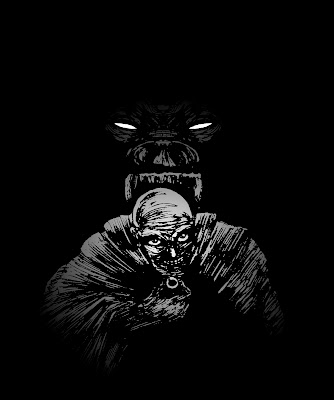 You may have noticed the preceding art before: on The Cimmerian, on this blog, maybe even elsewhere on the 'net. Well, I'm not going to restrict things to reruns, and will introduce brand new (to the internet, at least) works from the pen of Al Harron. And pencil, charcoal, paintbrush, tablet and anything else that comes to mind, but mostly pen, since that's my favourite.

And now, the debut. 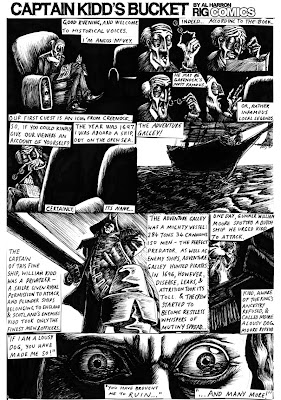 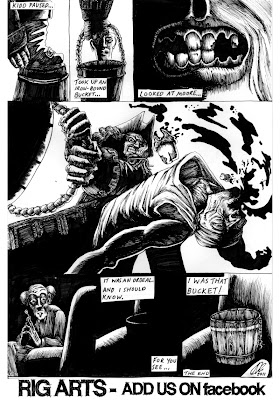 Last year was the great big Tall Ships event, and I was approached to produce a short 2-page comic that involved maritime escapades in some manner. So, I chose hometown** anti-hero Captain Kidd, and one of the more infamous moments of his life, as the subject. The comic proved fairly popular, as far as I'm aware, and free copies can still be found in and around Greenock. The style was largely influenced by horror comics like Creepy and Eerie and some of the more grotesque political cartoons in equal measure, but with a sense of whimsy hand in hand with the gore and violence. The haphazard placement of the text boxes is fully intentional. Future episodes of Historical Voices may feature the thistle that alerted the Scots to the invading Norse army, the spider who inspired Robert the Bruce to persevere, the pen used to sign the treaty between James Balliol and Philip IV of France, and other little bits and pieces of Scottish history.

*Dinosaur & Sorcery? Dinosword & Sorcery? Sword and Dinosaurcery? I don't know, I want to get in on the portmanteaus.
**The actual birthplace of Kidd is generally thought to be Dundee, but the many years linking Kidd to Greenock has rendered a life of its own: if not his actual home, Greenock might be considered a spiritual one.
Uttered by Taranaich at 22:55