A quick follow-up to Et Tu, Alan?, wherein I elaborate on an excellent point Monsterhoodoo and David J. West bring up.  Let's have a look at that first paragraph again:

How many times have you opened up a copy of Savage Sword of Conan to find some barbarian forcing a lithe Kothian dancing girl back into the hay, ignoring her feeble half-hearted complaints and taking his cue from the delirious ecstatic look that the artist has drawn onto her face, showing you that she doesn't mind really. In fact, she likes this sort of treatment. Sure she does. Anyone would enjoy being sexually assaulted by an illiterate musclebound oaf who stinks of bear grease. That's most people's idea of a good night out.

Now, I forgot to mention that Moore is clearly making the mistake/misinterpretation of assuming that the "some barbarian" is meant to be the hero.  Judging by his later "Conan the Rapist" remark, it's clear he's trying to say that Conan would be among them.  I can't recall Conan ever forcing any girl, lithe, Kothian or dancer, into the hay in Savage Sword (at least up to 84, I haven't read beyond yet) but I can recall many merciless, violent bullies who do.  And, correct me if I'm wrong, but I don't think the audience is supposed to be rooting for filth like Constantius the Falcon. 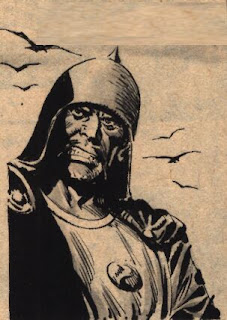 Does this look like the kind of guy the reader's supposed to root for?

Here's the thing you seem to miss, Alan: those "barbarians" forcing themselves on women?  They're meant to be the bad guys.  The reader is not meant to sympathise with them - in fact, I believe the use of rape is designed to make them into utter monsters.  And it works: there's little one can do to make a man more unforgivable than raping the heroine of the story.  Conan never forces himself on any woman (short of a goddess who's clearly using some sort of sorcerous aphrodisia while suffering a concussion after a hard-fought battle).  The closest we get is the "kiss while the girl bats ineffectually, then starts to snake her arms around him" motif, and that's hardly unique to Conan.

However, this phrase in particular stuck out.  "Anyone would enjoy being sexually assaulted by an illiterate musclebound oaf who stinks of bear grease."  Sound familiar? 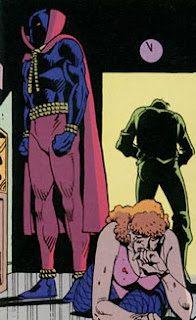 Now, I'm pretty sure one could make the argument that Moore was trying to show this as unhealthy and psychologically warped, possibly even as a commentary on that exact idea of rape victims really loving it, as an example of the gap between comic superheroines of the '50s and the '80s (commentator Fredrik made the same conclusion).  I'm pretty sure this was Moore's intention: certainly one can't look on The Comedian as a "hero," since he's complete scum.  He's Constantius - he's a mote in the eye of mankind.  Silk Spectre isn't exactly a shining example of humanity herself, and a figure to pity as well as condemn and admire.  Yet people have accused Watchmen of being warped because of the mistaken belief that The Comedian is meant to be a hero in a classic comic-book form - a misconception that's as incorrect as saying that Constantius' rape of Taramis in The Savage Sword of Conan is meant to enforce the stereotype of women enjoying brutal rape.  Clumsy obfuscation at best, willful misrepresentation at worst.

It rings especially hollow when it comes up in criticism of Sword-and-Sorcery - why?  Because pre-modern societies were pretty damned horrible places for a woman.  Treated like a second-class citizen, property, sometimes barely even human.  So yeah, women were raped.  It's terrible, it's harrowing - but it happened.  Just like how some women are so twisted by this horrific act that they do, in fact, form an attachment to their attackers.  It happens.  Nowadays, rape is a mercifully rare occurrence (though as with so many crimes, it's more common than people think) and is treated as the terrible thing it is - but back in the bad old days when life was cheap, it was depressingly common. So if anything, the depictions of rape in Savage Sword are simply portraying the sordid reality of pre-industrial society.

One more thing: don't accuse Conan of being a rapist.  By his own word, he never took a woman by force.  There isn't a single case of Conan violating that word, and Conan's a terrible liar (see "The God in the Bowl") though he's a canny manipulator.  Hell, we never even see him be violent towards a girl beyond dumping one who nearly got him killed in an open sewer and being exasperated at some of his dimmer charges' decisions: if he's reluctant to turn a sword on a girl even in self defense (as in "Red Nails") what possible situation would see him kill another woman?  Indeed, in most cases where a female villain is slain, it is not by Conan at all, but by the secondary protagonist (Tascela slain by Valeria in "Red Nails," Salome slain by Valerius in "A Witch Shall Be Born.") Don't bring up "The Frost-Giant's Daughter" either: that has a lot of mitigating factors, and in any case, Conan never did rape Atali.  Secondly, don't you dare accuse Howard of saying that all women secretly like being raped, or even that the women in his stories enjoyed it, outside of isolated instances.  Here's an excerpt of a letter where Howard, in his usual impassioned vigour, explains exactly how he feels about the mistreatment of women:

When I see the actions of girls I sometimes think they deserve all that they get and yet again I am nauseated at the injustice of life in regard to women. Woman-beating, for instance, goes on a lot more than most people realize especially in regard to young girls. Getting down to basic stuff, when a man and woman alone, her only real protection against him is his better nature or weaker nature, which ever you prefer. It must be Hell to have to beg for everything you get, or to beg out of abuse or punishment. Obedience – discipline – gah, I dont believe I hate any other words as I hate those two. The taste of them is as the tang of dung in the mouth of me. As regards sex, you and I are lucky. Think of the disparity of Nature’s gifts. A woman gets on her knees to some bastard and begs like a slave whereas if the same bastard even made an off color crack to you or me, he would get the Hell knocked out of him with one smash. And another thing – if a man is a Hell-whooper among men, wading in without fear or favor, a real tough nut, one can pardon wife beating in him easier than in some shrimpish bastard who is afraid to look into the eyes of a real man, and exercises his inferiority complex by knocking a woman around.

Keep in mind that Howard is clearly not advocating "Hell-whoopers among men" wife-beating in that last sentence, but showing the hypocritical double-standard of society in considering one type of wife beater "less objectionable" than another.  I know I can understand Howard's ambivalence to beaten women - I totally sympathise with their plight, but at the same time, am utterly frustrated that they've allowed themselves to get into such situations.  Yet, as Howard notes, who can blame them given the raw deal society has handed them?

And that's just how Howard feels about when women are beaten - imagine how Howard would feel about rape.  Hell, we don't have to imagine: we know from the letters.  Nearly every instance of rape I can find, Howard's either writing about the harsh reality of barbaric and civilized life (not glorifying it, like some people assert), talking about some heinous scandal in the news, or sarcastically "glorifying" it in one of his scathing satirical plays:

Mike: "... Women all have slave complexes - Hell, I guess centuries of rape and abduction implanted a love of violence in them so that they cannot distinguish love from mere mistreatment. Fondle a woman and she’ll cross you; beat her and she’ll cringe to you and love you. Thats why I can't respect the sex as a whole. Resentment, hate, vengeance! Those are the real great things of life. Meekness is a weakling's revenge and forgiveness is a coward’s refuge.”

Mike ends up stabbed by the very girl he's berating.  Serves him right.

Finally, here's some more on what Howard had to say on Harold Preece's "Women: A Diatribe":

I got a long letter from Harold and after much oration he says as follows:

“One step in the process of emancipating myself, mentally, has been the complete disillusionment of myself regarding women. Women have a tendency to make men effeminate and domestic; and I believe, therefore, that they are a hindrance to the full expression masculine personality. It is significant that the frails have never produced a single great philosopher, and that the really great women, whom this world has produced, can be counted on the fingers of one hand.

“The fickleness of woman is proverbial, one of the major themes of literature, in fact. A woman, generally speaking, has no conception of honor, or obligation except to her offspring; and she generally ceases to love her mate after the birth of the first child.

“Woman should be relegated to her proper place, and kept there. Let the men assert their rights, and not be daunted by powder puff or allured by hose.” Or words to that effect. I am preparing a scathing rebuke of which I shall probably enclose a carbon copy to you.

A scathing rebuke it was, and soundly destroyed Preece's silliness handily.
Uttered by Taranaich at 00:01