The Fine Line Between Homage and Ripoff

I'm not enamored with Kurt Busiek's run on Conan. For all the awesomeness of The Tower of the Elephant, there's a Born on the Battlefield to shake everything apart.  But then, that's for another time.  From what I can gather, Busiek is well-regarded in the comics world for his work.

His latest creation is... rather familiar... 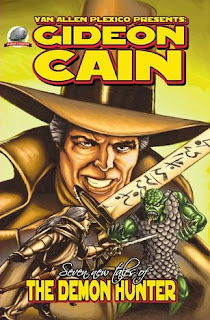 If Charles Napier and Marlon Brando had a baby...

During the famous Salem Witch Trials (1692-93) British born Puritan soldier, Gideon Cain aided the inquisitions, believing them to be just. Soon thereafter, God revealed to Cain that he and the righteous citizens of Salem had been duped by a cunning, ageless demon from Hell known as Azazel. The guilt of his actions weighs heavily on his conscience and rather than be driven mad by it, Gideon chooses to make atonement. Taking up his sword, the blade inscribed with holy runes, he bids farewell to his wife and children and departs on his sacred mission. Now he wonders the earth doing God’s work and destroying evil in whatever shape or guise it appears; his one consuming goal, to find and destroy Azazel.

Now, I don't think this qualifies as out-and-out plagiarism, of course.  Sure, he's a British Puritan soldier who wields a mystical weapon, wandering the earth doing God's work and destroying evil in whatever shape or guise it appears, whose first name is evocative of a wise Biblical figure and last evocative of another Biblical figure that happens to commit the first murder... Erm... what was I saying?  Oh, right, this is totally not a Solomon Kane expy. No siree.

I mean, come on, he has a family, he's a century late, his sword has holy runes, the Almighty himself has set him on his quest in person, and he has a demonic nemesis.  And he wears brown instead of black.  That's totally different, right?  Right?

Still, I can't help but feel this is seriously pushing it.  Citing Kane as an influence doesn't defer the fact that this Gideon Cain fellow is really, really similar.  If nothing else, that name is just too close.  I wonder how Paradox/CPI would react to a new character, Niall the Savage, black-haired, green-eyed, axe in hand, who was a thief, pirate and adventurer in a prehistoric age lost to modern times, and became the king of the most powerful civilized land by his own hand?  But no, it totally isn't Conan, because see, he only has one eye, and his family was killed by the evil wizard Thoth-Amo- I mean, Roff-Anom!

Homage or Ripoff... I'm unsure still.  Guess we'll have to wait and see.
Uttered by Taranaich at 22:38