Would you believe it, another one's popped up - and there's more on the way. 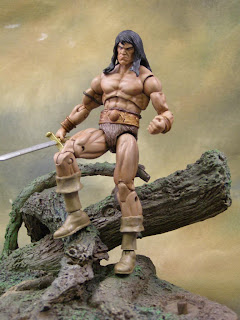 I'm really excited about my new series of custom figures of which this is the first. I am working on a series of custom figures based on Robert E. Howard's Conan the Barbarian, specifically inspired by John Buscema's magazine work, but also inspired by other sources such as the work of Frank Frazetta, my own imagination, and my own interpretations of the descriptions taken directly form Howard's writings.

Well, as you can see, this is a pretty damn close approximation of Big John's Big Cimmerian.  However, this isn't the only figure Miked (Mike D?) is working on:

I thoroughly enjoyed this guy and am looking forward to presenting my current wips: Frost Giant, Turanian soldier, Pictish warrior, Vanir warrior, Hyrkanian archer..... and more! Thanks for looking and as always comments are appreciated!

This is very interesting to me. Plenty of folk do Conan action figures, but not so many choose to depict other aspects of the Hyborian Age - a grave oversight, given the sheer majesty and colour of the setting. Buscema's Picts are pretty good inspirations (hope Miked doesn't miss the great white skulls painted on his chest and face), and the Barry Smith Vanir & Frost Giants are more or less accurate too.  I hope his Turanian archer sports the famous spired helm and tigerskin cloak.

As for "more," maybe we'll be seeing Bêlit and Valeria. I sure hope so!
Uttered by Taranaich at 00:01