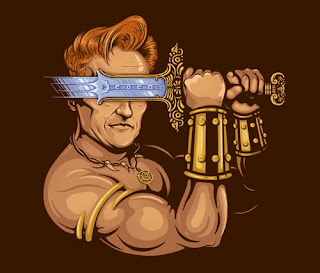 Originally reported by Hollywood Reporter, and shamelessly parroted by Todays (sic) Hot News, the Montreal Gazette and Business Inside, no doubt to be followed by others.

Case closed, right? Not quite. Let's say O'Brien wants to call his show "Conan," which TBS's "Conan is coming this November" promos seem to suggest is a distinct possibility. Simple, straightforward, it's how everyone will refer to the show anyway ("Did you see Will Ferrell take his shirt off on Conan last night?").

Just one problem: Our quick search of the Patent and Trademark Office website reveals O'Brien doesn't own the trademark on "Conan." Despite his 17 years on television hosting NBC shows with "Conan O'Brien" in the title, use of the "Conan" mark for "entertainment" purposes is owned by a European company called Conan Properties International, which for decades has used the "Conan" mark in connection with the Conan the Barbarian films.

Will we see a Conan vs. Conan fight to the death? Probably not. If Team Coco wants to name the show "Conan," it could decide to plow forward and test the legal waters. At the very least, there is a good argument that the average person watching a commercial for something called "Conan" would know to expect self-pleasuring-animal humor, not heavily-accented barbarians (unless maybe Arnold Schwarzenegger was a guest). But there is another Conan the Barbarian movie in the works, and this one's called just "Conan." So the owner of the Conan mark might argue that the O'Brien show could confuse the public and damage the movie.

Given the legal fracas that led to O'Brien leaving NBC in the first place, we're guessing that if he wants to name the show "Conan," his team will probably just pay Conan Properties International a little money so it doesn't sue. Or they could just go with "Conan O'Brien," which not even the most clueless TV viewer would mistake for a sword-and-sandal adventure.

Problem solved. Unless, of course, Conan decides to call the show "Jeff Zucker and Jay Leno Wouldn't Know Funny If It Smacked Them In Their Big Fat Heads."

There was a case a while back where the anime known (in English) as "Detective Conan" - a Sherlock Holmesian little number named in homage of Arthur Conan Doyle - changed its name to "Case Closed" when shown in the US.  Contrary to popular opinion, however, this was not a case of CPI throwing its weight around - rather, it was the anime's US distributors, 4Kids, which mandated the change, likely so they could have a trademark they could use.  Because, of course, nobody's going to confuse a cute little bespectacled detective with the Damnedest Bastard Who Ever Lived.

This isn't comparable to that situation.  Is this news? Is this seriously what counts as news? They're really stretching if they think there's any sort of possibility for legal problems.

I particularly love that third-to-last paragraph, where they say that the fact Conan O'Brien is more well known than Conan is a decent argument.  As if that somehow invalidates the fact that the trademark predates Conan O'Brien's birth.  And frankly, I'd even contest that.  Sure, among the clueless frat boys and teenyboppers O'Brien may be the first that springs to mind, but this is Conan we're talking about. Conan's been a pop culture icon for over half a century, with dozens of books, comics, games, films, tv shows, action figures, lunchboxes! You can't tell me that O'Brien dwarfs the other Conan's popularity, even in this day and age, to the point where it's worth contesting trademarks.

Finally, thwarting any possibility for this news to be worth a fig, the article solves the "problem" by itself, suggesting that Conan might just use his full name: "Conan O'Brien."  So... what was the point of that discussion?  Is there any indication that O'Brien would go with plain old "Conan" as the title of his show?  From what I gather, O'Brien's a comic genius who contributed to the best years of The Simpsons - I doubt he'd go with such a plain title as "Conan."  Meaning this entire report was completely pointless.

I hate journalism sometimes.
Uttered by Taranaich at 00:01

Labels: Conan Copyright, What In Blazes