I am giddy as a schoolgirl right now, because one of my favourite actresses is coming to my neighborhood! 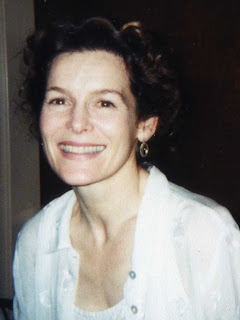 One of my few disappointments with the Solomon Kane DVD was the lack of input from some of the cast, especially Alice Krige.  Alice has a special place in my heart, because she's one of the first "celebrities" I met: at one of the last Star Trek conventions of the 20th Century, a few years after Star Trek: First Contact.  Because I was going through a ludicrous "Simpsons caricature" phase at the time - come on, I was 15 and stupid, cut me some slack - I got her to sign my caricature of her.  She was most accommodating to this weird little boy, and when you're the weird little boy at a Star Trek convention...  Later, we (and a few hundred others) danced at the ceilidh at night.  She was the sweetest, mostly lovely woman, and took her time talking to everyone.

So, I'm champing at the bit to see her again.  Even in a line-up which includes none other than The Cat and Rimmer, she's my number one priority.  Any other year, I'd be bouncing off the walls at being in the same breathing space as two of the Boys from the Dwarf, but not this year.  And I never thought I'd say that there was someone I was more interested in meeting than those two.

Then I was struck by a dim memory.  I recall one of the more colourful members of the Robert E. Howard Forum, Evil Thoth-Amon, managed to - somehow - get Michael J. Bassett for an interview.  I can't find the interview, sadly, but Evil Thoth was in costume the entire time.  It was surreal, and I'm truly impressed with his success.  Then, another memory: Spoony's spontaneous interview with Kristanna Loken, where he was essentially dared by Michelle Rodriguez into asking her for an exclusive interview - with somewhat disastrous results.  Well, I have a decent camera, I have a blog, I have experience with a prestigious website, I've been in contact with some notables in the world of fantasy and science fiction - I was voted as an emerging Robert E. Howard scholar, after all (and no, the reality still hasn't settled in), I have some experience doing interviews on local radio. The beginnings of a wild, daring idea are stirring in my mind...

Even if I don't go through with my mad scheme, it'll still be great to see her again.  She's a wonderful lady, and it would be fantastic to hear about her experiences on Solomon Kane.  Had she read the stories?  Was she familiar with Howard?  Did she have a good experience?  All questions I'll be asking, and possibly pose at the panel, but it would be great to have her answers available for all to hear or read.  And as a memento, I'll be taking my Solomon Kane souvenir magazine for her to sign (if they'll let me), or I'll get a photo taken with her.

As an aside, another interesting guest at Collectormania will be Joe Flanigan of Stargate Atlantis.  Joe was in Ireland a short while ago, where he met up with his friend and Stargate Atlantis colleague... Jason Momoa! 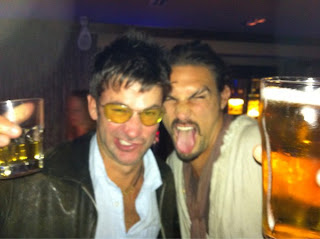 The urge to grill poor Joe about Jason's exploits as the Cimmerian is great, but ultimately I think it would be incredibly rude to basically ask about what his friend's up to, instead of... well, him.  Unless we have a surprise guest at Braehead, of course...
Uttered by Taranaich at 00:01