As you might know, Alice Krige couldn't make it, and I was sad.  It turned out Joe Flanigan landed a movie role, and had to fly out at the last second, robbing me of the chance to cheekily grill him about Momo.  So I was sad.  Indeed, I was so sad that I didn't even actually attend any of the talks, or go to meet any of the other guests - not even Chris Barrie or Danny John-Jules.  I'm probably going to regret that pretty soon, but I just didn't have the heart for it.  What was quite strange was I didn't feel that strange rush one gets when in the presence of someone famous or well-regarded, certainly not like last year.  Am I becoming desensitized to celebrity, or was I just too low to fully appreciate them?  I met a ton of famous folks at Cross Plains, and was a teeny tiny mini-celebrity-of-sorts at Cross Plains - four people came up to me saying how much they enjoyed my work, which is just the most wonderful feeling in the world even when the annoying self-consciousness and self-deprecating modesty sets in.  Or maybe someone needs to prick my head for fear of it carrying me into the stratosphere...

Ah well, perhaps next year.  Some day I'll get that interview with Alice.  This year, I spent most of the day browsing the stalls, looking for Howard/Transformers/Dinosaur-related paraphernalia. Usually, Collectormania is where I get most of my Transformers stuff.  This year, there wasn't really anything of note, though I got one or two things, and my usual contact ("I know a guy...") seemed pleased enough to see me in his stoic manner, even if I didn't spend as much as in previous years.  I also found an absolutely delightful pack of dinosaur trading cards - they were thoroughly dry and palaeontological in nature, no attempt to attract the "cool" crowd, i.e. perfect for me - for only £8.  It wasn't just stuff for myself, of course: I bought my long-suffering mother an Alan Moore Swamp Thing, I got a Hulk for the youngest cousin - the nerd is strong in this one - and a few secrets for birthdays and whatnot.  Good haul.

I got a few Conan comics, too, mostly Dark Horses that I missed out on for a while a few months ago.  One was the Frazetta Series "God in the Bowl" adaptation - and if ever there was a case where a Dark Horse adaptation utterly blows away a Marvel adaptation (though in the case of the latter, "adaptation" is a helluva stretch) this is it.  I don't know why I didn't pick up the Frazetta cover series before: they have the Howard adaptations without the Busiek material, a fantastic (if occasionally ill-suited) Frazetta cover, and are sturdily built with a nice glossy finish.  However, the nicest surprise purchase I made there from a Howardian point of view was Issue 1 of Dark Horse's Kings of the Night. 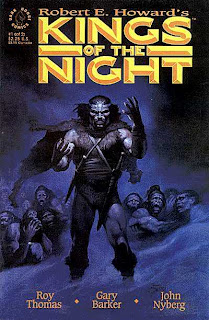 Kings of the Night #1

In ancient Britain, chieftains Bran Mak Morn and Cormac and the tribes of Britain and the North prepare to face the assembled might of Rome. Their only hope of victory lies in finding a king to unite their armies - an impossible task - unless the sorcerer Gonar can conjure one from the Antediluvian past!

This is way before their Conan run, and frankly, even this issue is more Howardian than half the stuff DH has done recently.  It's a fantastic adaptation, though I must say the interior artwork is nowhere near as impressive as John Bolton's covers.  That said, I liked it, and I'm now going to hunt down the second issue.

It was a strange experience, this year.  Usually I feel like an inadequate nerd, one of the great crowd of worshippers congregating around their idols and demagogues.  This year, I felt like a stranger in a strange - but friendly - land.  I felt a bit out of place.  Perhaps age has altered my outlook, or some such.  Maybe I'm not a nerd anymore, or have evolved into some sort of super-nerd so nerdy even other nerds are more socially integrated than me.  Weird, weird day - though I'm all geared up for next year.
Uttered by Taranaich at 00:37