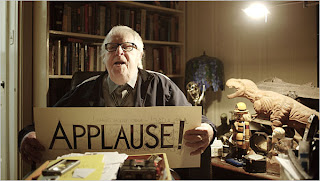 Wow, 90 years old.  I was alerted by Morgan Holmes, but unfortunately I never got around to it until just now.

What can be said about Ray Bradbury that hasn't already been said?  He'll always have a place in my heart for his dinosaur stories "A Sound of Thunder," "Tyrannosaurus Rex," and “Besides a Dinosaur, Whatta Ya Wanna Be When You Grow Up?” This last is the tale of a little boy who is utterly convinced that being a goddamn Dinosaur is the only worthwhile career choice. I'd pondered such an idea myself, mostly in something akin to an altered version of Howard's chapter of "The Challenge from Beyond":

From that final lap of senselessness, he emerged with a full understanding of his situation. His mind was Imprisoned in the body of a frightful native of an ancient planet, while, somewhere on the other side of time, his own body was housing the monster's personality.

He fought down an unreasoning horror. Judged from a cosmic standpoint, why should his metamorphosis horrify him? Life and consciousness were the only realities in the universe. Form was unimportant. His present body was hideous only according to human standards. Fear and revulsion were drowned in the excitement of titanic adventure.

What was his former body but a cloak, eventually to be cast off at death anyway? He had no sentimental illusions about the life from which he had been exiled. What had it ever given him save toil, poverty, continual frustration and repression? If this life before him offered no more, at least it offered no less. Intuition told him it offered more - much more.

With the honesty possible only when life is stripped to its naked fundamentals, he realized that he remembered with pleasure only the physical delights of his former life. But he had long ago exhausted all the physical possibilities contained in that earthly body. Modern Earth held no new thrills. But in the possession of this new, dinosaur body he felt promises of strange, exotic joys.

A lawless exultation rose in him. He was a man without a world, tree of all conventions or inhibitions of Modern Earth, or of this strange planet, free of every artificial restraint in the universe. He was a god! With grim amusement he thought of his body moving in earth's business and society, with all the while a prehistoric monster staring out of the windows that were Al Harron's eyes on people who would flee if they knew.

Let him walk the earth slaying and destroying as he would. Earth and its races no longer had any meaning to Al Harron. There he had been one of a billion nonentities, fixed in place by a mountainous accumulation of conventions, laws and manners, doomed to live and die in his sordid niche. But in one blind bound he had soared above the commonplace. This was not death, but re-birth -- the birth of a full-grown mentality, with a new-found freedom that made little of physical captivity on Pangaea.

He started. Pangaea! It was the name of this planet, but how had he known? Then he knew, as he knew the name of him whose body he occupied - Littlefoot. Memory, deep grooved in Littlefoot's brain, was stirring in him - shadows of the knowledge Littlefoot had. Carved deep in the physical tissues of the brain, they spoke dimly as implanted instincts to Al Harron; and his human consciousness seized them and translated them to show him the way not only to safety and freedom, but to the power his soul, stripped to its primitive impulses, craved. Not as a slave would he dwell on Pangaea, but as a king! Just as of old barbarians had sat on the throne of lordly empires.

For the first time he turned his attention to his surroundings. He still lay on the couch-like thing in the midst of that fantastic room, and the dinosaur stood before him, holding the polished metal object, and clashing its teeth. Thus it spoke to him, Harron knew, and what it said he dimly understood, through the implanted thought processes of Pangaea, just as he knew the creature was Sharptooth, supreme lord of science.

But Harron gave no heed, for he had made his desperate plan, a plan so alien to the ways of Pangaea that it was beyond Sharptooth's comprehension and caught him wholly unprepared. Sharptooth, like Harron, saw the sharp-pointed metal shard on a nearby table, but to Sharptooth it was only a scientific implement. He did not even know it could be used as a weapon. Harron's earthly mind supplied the knowledge and the action that followed, driving Littlefoot's body into movements no man of Pangaea had ever made before.

Harron snatched the pointed shard and struck, ripping savagely upward. Sharptooth reared and toppled, his entrails spilling on the floor. In an instant Harron was streaking for a door. His speed was amazing, exhilarating, first fulfillment of the promise of novel physical sensations.

As he ran, guided wholly by the Instinctive knowledge implanted in Littlefoot's physical reflexes, it was as If he were borne by a separate consciousness in his legs. Littlefoot's body was bearing him along a route it had traversed ten thousand times when animated by Littlefoot's mind.

Down a winding corridor he raced, up a twisted stair, through a carved door, and the same instincts that had brought him there told him he had found what he sought. He was in a circular room with a domed roof from which shone a livid blue light. A strange structure rose In the middle of the rainbow-hued floor, tier on tier, each of a separate, vivid color. The ultimate tier was a purple cone, from the apex of which a blue smoky mist drifted upward to a sphere that poised in mid-air -- a sphere that shone like translucent ivory.

This, the deep-grooved memories of Littlefoot told Harron, was the god of Pangaea, though why the people of Pangaea feared and worshipped it had been forgotten a million years. A dinosaur-priest stood between him and the altar which no hand of flesh had ever touched. That it could be touched was a blasphemy that had never occurred to a man of Pangaea. The dinosaur-priest stood in frozen horror until Harron's shard ripped the life out of him.

On his saurian-legs Harron clambered the tiered altar, heedless of its sudden quiverings, heedless of the change that was taking place in the floating sphere, heedless of the smoke that now billowed out In blue clouds. He was drunk with the feel of power. He feared the superstitions of Pangaea no more than he feared those of Earth. With that globe in his hands he would be king of Pangaea. The dinosaur men would dare deny him nothing, when he held their god as hostage. He reached a hand for the ball - no longer ivory-hued, but red as blood.... 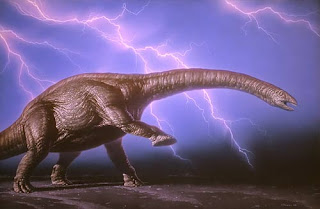 Hither came Littlefoot, the thunder-lizard...
Aside from the dinosaur stories, there are the other classics too numerous to name, but Bradbury wasn't purely a master of science fiction: he wrote excellent horror and fantasy, too, as well as stories that could be counted under the genre which is currently known as "magical realism," a term that is often erroneously applied to straight science-fiction and fantasy rather than the specific genre. He's a fantastic author who I never really spent enough time talking about on the blog, and which I hope to rectify in future.

To top it off, as reported by Doug at the REH Forums, a very very very Not Safe For Work (don't click on that link if you're sensitive to swearing and sexual situations - that means you, Gran!) video tribute from Rachel Bloom.  The idea of putting a provocative spin on Ray Bradbury titles in a peppy pop song is something I would never, ever have come up with, and find utterly sublime.  The occasional spoken word interludes just sell it even more.  "You won an Emmy award for the screenplay adaptation of The Halloween Tree!"

(Loved the cheeky Kurt Vonnegut dig too.)
Uttered by Taranaich at 00:01