Finally, we can re-do Deadliest Warrior's fights right... At least, that's the idea.  I'd love to have the Viking destroy the Samurai, the Knight obliterate the Pirate, and everything in between.

Luckily, I'm not the only one.  As I said a while back, Spoony is one of my favourite internet commentators, but never has that been more true than in his above review of the game, and a previous encapsulation of more or less everything I despise about the show itself.  The BS Historian utterly annihilates the show's takes on the IRA vs the Taliban and William Wallace vs Shaka Zulu.  A chap called The Black Lion does the same devastating defenestration of Knight vs Pirate on the show's own site! Andrew Wheeler brings up ten excellent reasons why Deadliest Warrior was completely wrong about their Alexander vs Attila matchup.  Hell, even TV Tropes - a site I love and hate for many myriad reasons - rants about it, though as is the case with most public wikis, there's a lot of nonsense on there.  Mostly about the samurai, naturally.  Their main topic, on the other hand... I'll have to get back to that.  Honestly, when even fecking Cracked is calling you on your lack of historical accuracy, you know you're in trouble.

I'm waiting for the Deadliest Warrior parody from, say, Dead Ringers, Bremner Bird & Fortune, or (with a bit of luck) The IT Crowd or That Mitchell and Webb Look - but then, what could they possibly do to make the show look even more imbecilic that they aren't doing well enough already?

Better yet, someone should make a rival show.  One that uses actual historical research, genuine experts, and the real scientific method, without resorting to such flashy Hollywood nonsense as used in the show. 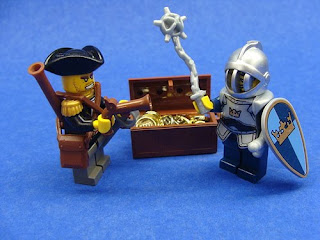 In the medium of Lego, of course.  Because nobody could be mad at Lego.
Uttered by Taranaich at 00:01