I can't say I remember hearing about this podcast. 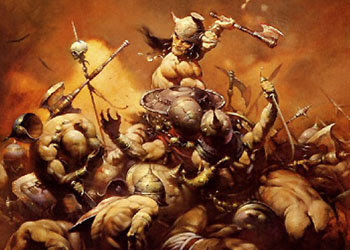 This episode is a memorable one, as we recorded it while Fandomania was under siege from fans of Robert E. Howard who took umbrage with an article we published about the writer’s life. Hilarity ensued.

Hilarity, Jason?  I seem to recall that you were requesting Howard fans to leave Maggie alone, that she was very upset about the feedback she received, to the point where, upon posting another article later on The Cimmerian, that you asked us to just put it behind us, that Maggie suffered enough?  It didn't sound like hilarity was ensuing at all, but that you were treating this situation as a fairly serious one.

(Of course, my sarcasm reader might be faulty, and unable to detect any in the use of the phrase "hilarity ensues," but you'll forgive me if I'm not quite sure given the context.)

I'm too afraid to listen to it.  Not afraid for myself, or for Maggie and Fandomania, but for my keyboard: it's had a lot of battering to put up with lately and I don't want to break the poor thing. Maybe it's a good podcast, maybe it isn't: I won't make little Qwerty suffer any more.

Of course, if any enterprising readers feel differently, they could always say if it's worth the listen...
Uttered by Taranaich at 23:40