David Bishop Doon the Watter, and the Dark Age of Conan Comics 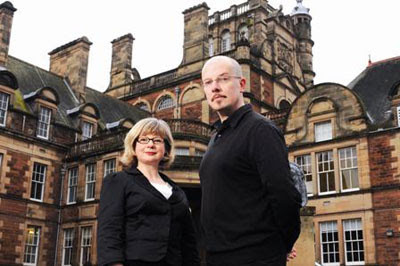 Something I'd been meaning to talk about was when I saw David Bishop in Greenock.  That's him on the right, next to Sam Kelly.

Back in May, part of the Greenock Library's initiative to get young people using them again was buying a vast pile of comics. The usual suspects were there: Maus, Watchmen, Transmetropolitan, V for Vendetta, Preacher, The Invisibles, 300, The Dark Knight Returns, Sandman, Arkham Asylum: A Serious House on Serious Earth,  even things like Robert Crumb's Old Testament. Absolutely fantastic range, even if it does lack some Thomas adaptations (in an ideal world, I'd have a "Best of Roy Thomas & Robert E. Howard" collection with Worms of the Earth, Red Nails, Black Colossus, Wings in the Night et al), it's about the best possible collection I could think of.

David mostly talked about his work, but he also talked about the ungodly Sylvester Stallone Judge Dredd, which is about as close to the source material as Conan the Destroyer was to "The Horn of Azoth."  Still closer than Conan the Destroyer was to Howard's Conan, though: the world of Mega-City 1 was pretty beautifully realized, and at Stallone really looked like Dredd until he opened his big yap.  But I digress.

There was a fun bit when he opened the floor to people, asking them what comics they read.  You had the likes of Ghost World, Watchmen, V for Vendetta, Scott Pilgrim vs the World, Kick-Ass and the like mentioned, all those very arty and very worthy comics which every comic geek knows.  And 2000 AD.  (I kid, I love those crazy nutjobs, I read Judge Dredd when I was ickle.)  I'll give you three guesses what mine was.  His response: "Ah, Conan... a bit of Thud and Blunder!"

I wasn't too bothered by the jibe, since the vast majority of Conan comics are indeed a load of tripe (as is the case with any franchise with books & issues running into the hundreds), plus I kinda like the idea that Bishop knows Poul Anderson.  Nevertheless, I had to chat to him at the end.  Geraldine got there first enthusing about his run on Doctors, but hey, that's Geri for you.

David wasn't a fan of the genre, and he admitted his two Warhammer novels were basically not "him."  Which is fine, of course: however, I still felt the need to make the case for Howard, and talked about how frustrating it can be for his most famous son to be associated with such nonsense.  The sad fact was that plenty of people were happy with the formulaic, pointless, generic Conan comics & novels, and frequently the authors would just look on it as a job.  David seemed sympathetic enough, and put the situation rather succinctly: "in this issue, the sorcerer will be a *motions dice roll* necromancer!  And the girl's breasts will be *motions dice roll* enormous!" So depressingly true.

Still, it's kind of strange that a guy whose bread and butter was 2000 AD in the 1990s wouldn't warm to Conan.  Then again, the state of Conan in the '90s was baaad.  This was the age of Conan the Moellerian, Conan the Adventurer, and the last, worst of the Tors.  Even Conan was suffering from Leifelditis. 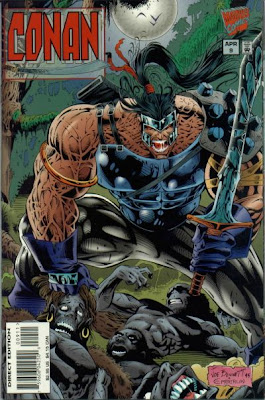 Anyway, another part of the event was the announcement of a comics course at the library.  Every week, the participants would borrow a comic, read it, and chat about it for the first hour.  The second hour would be spent on comic theory, and writing your own comic.  Needless to say, I leapt on the opportunity, and with The Cimmerian's final curtain, it's great to have something else to look forward to on Saturdays to help fill the void.

My ideas for comics usually involve dinosaurs (I might upload my first one when I get the damn scanner working), but this might finally kick-start me into writing my take on Conan's birth.  I don't want to get ahead of myself, but I'm confident it'll be very different from those that have come before.  Especially "Born on the Battlefield."  I'd also like to tackle the Howard versions of Savage Sword tales: "The Black Stranger," for instance.

Then there are the adaptations for Howard stories that none of the major companies would do.  Sure, there's an interest in the likes of Cormac, Turlogh, Breckinridge, Costigan and the like, but who's going to do Black John O'Donnell, "People of the Black Coast" and Golnar the Ape?  I'd love to get a gander at some of the unpublished/rare Howard stories too, especially some of his science fiction ones.  Man, if Howard lived to see the Golden Age of Science Fiction taking off, he would've kicked arse in that genre.

"The Man Who Went Back" is an example for what Robert E. Howard's SF would be like.  Here's Tompk's capsule summary:

In “The Man Who Went Back,” John Pendragon (yes, the many-generations-removed-heir of Uther and Arthur) volunteers for time travel in order to effect an unfinished-business trip: he means to introduce the Saxons carving England from Britain to the rapid-fire sine qua non of trench warfare weaponry.

Well, that puts Keith's series on Uther in a whole new light!

Celtic Britons mowing down the invading Saxons with guns.  Groovy.
Uttered by Taranaich at 01:50