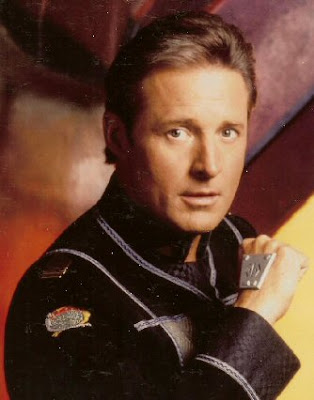 I've been doing research for an upcoming series of posts on TC charting the blog's history, when I came across this little gem: who would have thought there to be common ground between Robert E. Howard and Babylon 5?

From Hollywood to Cross Plains
A routine request to show the Robert E. Howard Museum last week resulted in quite an exciting opportunity for local Project Pride members. Arriving at the Museum, they found Bruce Boxleitner and Rob Word wandering around the yard, thoroughly enjoying the peace and quiet. Boxleitner, popular Hollywood actor best known for his television roles and producer Word had flown in from California to participate in the Dean Smith Celebrity Rodeo in Abilene.

Both visitors were very knowledgeable of Howard and his writings and the history behind his life in Cross Plains. Boxleitner was especially interested in Howard’s western stories.

Boxleitner has played in numerous made for TV movies and is currently in the TV series, “Pandemic”. Some may remember him in the series “Scarecrow and Mrs. King” of some years back. One of his real ties to the weekend, however, was perhaps the fact that Dean Smith had played his stunt double in “How the West Was Won."

I’ve known that Bruce was a Howard fan for awhile, ever since James Van Hise (editor of Sword & Fantasy) told me the story of when he interviewed the actor for Starlog or some such magazine and discovered that he owned the Wandering Star books. Boxleitner is best known these days for his starring role in the long-running sci-fi series Babylon 5, but those of us who grew up watching early 80s cable television also remember him fondly from his role in Tron.

While at the World Fantasy Convention a few weeks ago, one of the things I hammered home to non-believers was the breadth and depth of Howard’s fan base worldwide, how his influence was always popping up in the strangest places. Boxleitner is merely the latest in this trend. The fact that he went out of his way to visit Cross Plains all the way from Abilene to satisfy his Howardian curiosity speaks volumes. It’s nice to know that Howard has friends in Hollywood — it is to be hoped that someday this affection will translate into some good Howardian adaptations of his westerns and other stories.

I can't be the only one who got a spark of inspiration: a Robert E. Howard production starring Bruce Boxleitner!  Awesome.  I'm literally giggling with glee as I type this.  Not only is he an REH fan, he's an "I have the Wandering Star collections" REH fan - that's the hardcore demographic.  I too hope that some day, the Boxster might be involved in a Howardian project.

Then there's this bombshell:

Boxleitner is married to Melissa Gilbert of the “Little House on the Prairie” fame.

Both Babylon 5 and Little House on the Prairie were formative television shows on my young mind.  If I wasn't watching Star Trek, I was watching Babylon 5 (or Sliders, or the sadly forgotten Earth 2 and Space: Above & Beyond. It's because the latter two were cut short that I didn't get into any of the Stargate shows until later: I can't make a commitment to an SF show unless I know it's going to last.) I never saw much of the final seasons, but I did enjoy the early ones. I also loved Little House on the Prairie growing up, the tales of Laura and the Ingallses' trials and tribulations imbuing a fascination for the pioneer spirit. 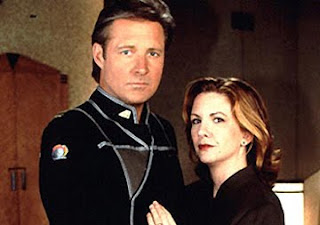 So, there's a connection I never thought I'd see: not only Babylon 5, but Little House on the Prairie have a link to Robert E. Howard through the magnificent Bruce Boxleitner. Whodathunkit? 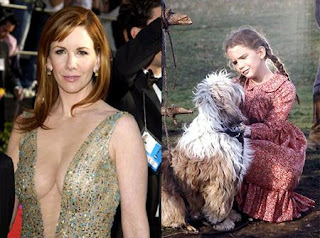 (It's also something of a paradigm shift to see the adorable little girl I grew up with on Little House on the Prairie wearing what is clearly not appropriate costume for an 1870s American period drama.)
Uttered by Taranaich at 20:44