Conan the Momoan: A Few Adjustments 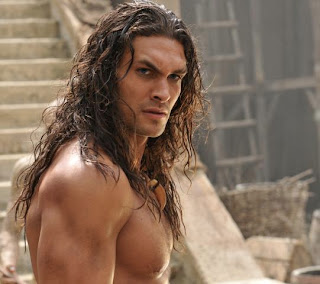 Looking at the clear photo of Conan the Momoan now all over the internet, it still bugs me how they couldn't do the hair right, "uncool" or not.  So, I went ahead and did a few little changes to make him more Howardian - at least in my mindset. 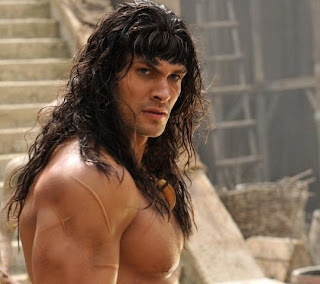 As you can see, my quick photoshoppery has given Conan darker hair, a fringe, and a few old scars.  I left the eyes: though I could've gone for a more "volcanic" blue, I thought they were alright.  I also beefed him up by about 20% or so, reflecting what I think to be about as muscular as one could get without sacrificing movement and flexibility.  I think it's about Frazetta level, though without the ripped definition.  While I'm sure some might think the fringe is a little girly (at least it isn't Betty Page), I think it's important to have some sort of hair element that allows Conan's eyes to glare from beneath his black mane: a fringe is just the simplest. Mam (who's also a Conan fan) suggested something like Elvis' side-parting hair as a more manly suggestion, which I'm open to.

In any case, since the popular conception of Conan includes a fringe as seen on Frazetta's, the comics and games, I felt just going with a simple fringe would suffice for the purposes of the experiment.  It's amazing the difference the fringe and black hair adds to the overall picture: he's starting to really look like Conan now, at least my perception.  If Momo looked like this, I'd be perfectly happy with him in an actual Howard adaptation (assuming he can act the part: I'm still not 100% convinced by his time on Stargate Atlantis).

Then, I wondered what he'd look like with a more Arnold-like build... 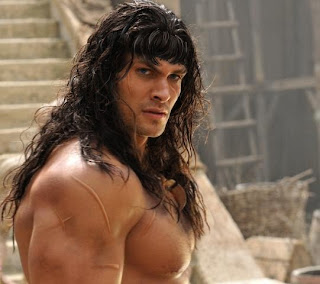 Or even a Buscema Conan build... 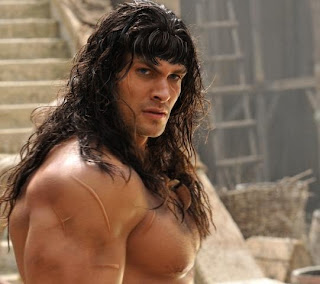 I stopped just short of Rob Leifeld though: not even Conan deserves that! 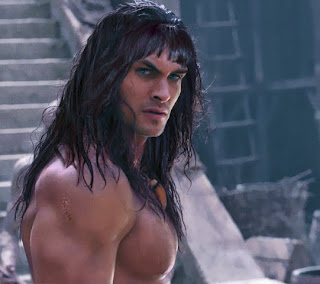 Ralph's isn't as big as mine, but the muscles are more defined.  He's added straighter hair, clearer blue eyes, and a nice fringe.  He's also changed the colour saturation to a blue cast.  I love it.

Fellow forumer Mikoza demonstrates the vast difference a dye job and a few more weeks at the gym could achieve (you might have to click to view the animation):

Very nice.
Uttered by Taranaich at 14:58