Another new shot of Conan the Momoan (® Miguel Martins)

As brought to us from Rock via kromtaar at the Robert E. Howard forums: 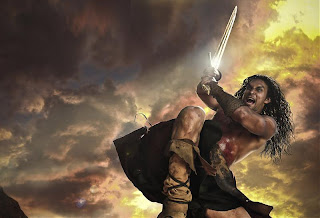 Man... I don't know.  It looks very 300-ish: stylized to the max with much post-production.  That would certainly explain why the principal photography schedule was so amazingly short, if most of the film is being done in post-production like 300.  The sword sports a lens flare J.J. Abrams could be proud of.  Conan's hair looks more like a Sumerian's than a Cimmerian's.  And for the life of me I can't figure out what that pose he's striking is meant to be: I guess it's meant to be a wild barbaric attack, but it looks more like a skirling dance.  Overall, my impression is that it's shooting for badass, but fell somewhere in the "stupid" section.

It's about what I've expected to come from this production, really.
Uttered by Taranaich at 00:00