Recently, Dark Horse heavily teased and promoted its upcoming wraparound cover to Conan #25 by Geoff Darrow, scheduled for September, the last issue before the relaunch

And while official solicitations have yet to be released, I understand that the cover may have to be withdrawn. Robert E. Howard Properties has objected to it being… too.. violent. For a Conan book. Blimey. That’s something.

Yeah... no.  I'd guess that the cover would be withdrawn because it is useless. 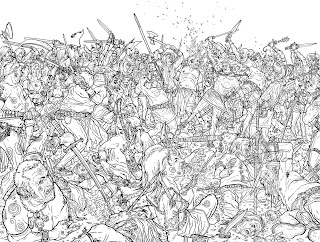 I have nothing against Geoff Darrow, but given what I've seen of his work, he could've done something more appropriate.  Way more appropriate.  His cover is a parody, and fan reaction has not been entirely positive.  The Keegans' cover is superior in every way.

Discussion on the Bleeding Cool forums ensued, including this... astonishing post.

Actually, Mr Darrow is obviously attempting something radically subversive here: showing what all this fantasy violence would look like in reality.

Okay; completely over the top (as is the norm in heroic fantasy anyay) but realistic to a point.

Welshjohnny, don't be dense.  This is not realistic.  A horde of pitifully out-of-shape pensioners, heads and limbs spontaneously popping off with weapons nowhere near them, weapons being left in bodies, and freaking cats running riot is not "realistic" in any fashion, let alone "more realistic" or "realistic to a point" in heroic fantasy.

Realistic fantasy violence would be to show the muck, grime, blood and horror of battle in a sickening, nauseating manner: "a thousand battle axes red with blood."  Red-stained bodies heaped in islands of gore amid a sea of viscera and ruin, pieces of human beings floating on a red tide like flotsam and jetsam of the Styx, cloven skulls, severed limbs, spilled guts, shreds of skin... You know, like how Robert E. Howard described violence.

Like gay-hued leaves after an autumn storm, the fallen littered the plain; the sinking sun shimmered on burnished helmets, gilt-worked mail, silver breastplates, broken swords and the heavy regal folds of silken standards, overthrown in pools of curdling crimson. Silken standards, overthrown in pools of curdling crimson. In silent heaps lay war-horses and their steel-clad riders, flowing manes and blowing plumes stained alike in the red tide. About them and among them, like the drift of a storm, were strewn slashed and trampled bodies in steel caps and leather jerkins – archers and pikemen. The oliphants sounded a fanfare of triumph all over the plain, and the hoofs of the victors crunched in the breasts of the vanquished.


In an instant he was the center of a hurricane of stabbing spears and lashing clubs. But he moved in a blinding blur of steel. Spears bent on his armor or swished empty air, and his sword sang its death-song. The fighting-madness of his race was upon him, and with a red mist of unreasoning fury wavering before his blazing eyes, he cleft skulls, smashed breasts, severed limbs, ripped out entrails, and littered the deck like a shambles with a ghastly harvest of brains and blood.

- "Queen of the Black Coast"

There was a frenzied instant when the blades flamed like summer lightning; then the group fell apart and Conan sprang up the stair. The oncoming horde tripped over three writhing forms at its foot: one lay face-down in a sickening welter of blood and brains; another propped himself on his hands, blood spurting blackly from his severed throat veins; the other howled like a dying dog as he clawed at the crimson stump that had been an arm.

As Conan rushed up the marble stair, the man above shook himself from his stupor and drew a sword that sparkled frostily in the radium light. He thrust downward as the barbarian surged upon him. But as the point sang toward his throat, Conan ducked deeply. The blade slit the skin of his back, and Conan straightened, driving his saber upward as a man might wield a butcher-knife, with all the power of his mighty shoulders.

So terrific was his headlong drive that the sinking of the saber to the hilt into the belly of his enemy did not check him. He caromed against the wretch’s body, knocking it sidewise. The impact sent Conan crashing against the wall; the other, the saber torn through his body, fell headlong down the stair, ripped open to the spine from groin to broken breastbone. In a ghastly mess of streaming entrails the body tumbled against the men rushing up the stairs, bearing them back with it

He caught the sword of the first man on his ax-head and crushed in the wielder’s breast with a murderous counter-stroke before he could step back or parry. The remaining Nemedian, missing a savage swipe, had his brains dashed out before he could recover his balance... The ax fell in a devastating arc, and the Aquilonian cried out and went to his knees, grasping the severed stump of his right arm from which blood spouted. It had been shorn away at the elbow, and the ax, unchecked in its descent, had gashed deeply into his side, so that his entrails bulged out.

- The Hour of the Dragon

He saw men lifted bodily and their heads cracked open against the stony altar. He saw a flaming torch, grasped in a monstrous hand, thrust inexorably down the gullet of an agonized wretch who writhed in vain against the arms that pinioned him. He saw a man torn in two pieces, as one might tear a chicken, and the bloody fragments hurled clear across the cavern. The massacre was as short and devastating as the rush of a hurricane. In a burst of red abysmal ferocity it was over, except for one wretch who fled screaming back the way the priests had come, pursued by a swarm of blood-dabbled shapes of horror which reached out their red-smeared hands for him.

As a teenager I devoured Conan, John Carter, et al, but when I came back as an adult (okay, not the intended market)

Well that explains why you know so little about Howard: you haven't read anything since the Lancers and all the stupid back-handed compliments therein.

I had grown up slightly and came to see just how gruesome the subject matter really was: I rmember picking up a Red Sonja story by the dream team of Maroto and Adams, a strip i had drooled over an an adolescent, and realized just how horrible the thing would be in reality.

Oh, you mean like how Howard himself described it?  The Marvel comics couldn't describe the horror and gruesomeness because of the Comics Code Authority.  Dark Horse isn't really shirking from the gore at all.  Methinks welshjohnny has only read the comics, and based his entire reading of Conan on them, without thinking that Howard knew exactly how gruesome and horrible the thing would be in reality.

I have a sort of theory on this; if any experience is interpreted through the eye of a writer or artist it aquires a sheen of , um, distance, from the reader. It has a beauty that one can't help but admire, but that keeps you away and uninvolved emotionally from what is actually being depicted.

I couldn't wait for Sin City, the movie, but when i saw it, it made me feel more than a little nauseated. Stuff that was fine (and indeed funny) on the page became unpalatable on the screen; Elijah Wood's dismemberment became almost too harrowing (to me, anyway) to watch. The audience, including my non-comic book fan GF, loved it anyway.
...
I saw a piece of art one day of a Warhol-esque print of the little vietnamese girl who had been burnt with napalm. I asked the artist what his intentions were with his work; he just said he thought it 'was a cool image'.
This, I think, sums up what I am trying to say here; art distances the viewer - and in this case the creator - from the subject. Imagine the true horror of the crucifiction, but the way it has been trivialised and commercialized over the years has brought a truly horrifying moment down to an almost kitsch cultural image; a piece of commercial fluff almost.

I'll admit, welshjohnny brings up an interesting point (in a roundabout way) but frankly, every time I look at a crucifix, I immediately imagine the horror that anyone undergoing such a monstrous ordeal could've undergone.  It makes me cringe even thinking about it, and the mere image of a human being's hands impaled by nails is enough.  I can't imagine anyone considering the crucifix "kitsch" or "commercial fluff" at all, frankly.  How could it be possible to trivialise such a horrifying act?

Is that what Darrow is trying to imply - and it's too much for the publishers to handle? Maybe the image may - God forfend - make their customers think? God knows: I'm just rambling.

Hah, if it's making the customers "think," they're only thinking "who's the idiot who thought Geoff Darrow would be a good choice for a Conan cover?"

Also, I seriously doubt there were many people walking around that were in body builder shape or anything close. Its not like food was plentiful or easy to aqquire. People back then would have hunted, pillaged, and sat around drinking Ale all day and screwing.

tattoo's and piercings are a very tribal thing that wuold make sense for a tribe of barbarians.

What balderdash.  Because life was a constant struggle to survive, because food was hard to come by, and people would've hunted & pillaged all the time, this means barbarians would be less physically fit than your average office worker?  Are you familiar with the old robot phrase, "Does Not Compute"?

Look at the independent tribes in Africa, Indonesia, South America and the Pacific: while they might not be rippling with Schwarzenegger-level muscles, they were also in peak physical condition, and looked athletic, strong and like warriors - because, if food isn't plentiful or easy to acquire, then only the strongest would survive.  I can't believe anyone could possibly consider these corpulent jokers as more realistic than muscular warriors - at least with muscular warriors, they're exaggerating their vitality, not completely inverting it.

I'm a Geoff Darrow and a Conan fan, but I also like both spaghetti carbonara and lemon meringue pie, but I'm pretty sure I'd hold back from serving them in the same bowl.

Darrow drawing Conan is like Charles Schultz drawing Lovecraft.
Uttered by Taranaich at 18:09