The Baby-Intellectuals of the Colloquy Society 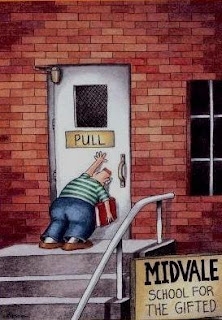 You might've noticed I don't suffer fools gladly: fools who think Conan the Barbarian was a faithful or even superior adaptation, morons who think Howard would've sympathized with Hitler, dunderheads who think Howard ripped off Tolkien.  Of course, it isn't only the trolls of the internet which make these stupid errors: apparently, so do "geniuses" like those at the Colloquy Society.

Now, I'm not anti-intellectual by any means, but I've had a really rough time of it with them. In high school, it was the people in my group I was most alienated from.  I was in all the top classes, but I couldn't stand half of the people in them.  They were cliquey, frivolous, arrogant and had the teen cruelty down to a fine art: being able to bully without actually bulling at all.  Little things, like snide remarks, cold shoulders, subtle sabotage.  Teachers were prepared to deal with bruises and name-calling, but they were powerless against that most sophisticated of cruelties.  I didn't really like high school at all.

There were a few friendly enough folk, and in the end I can't blame them - adolescence is a hard time for people, and all the hormones and psychological turmoil means they might be far crueller than they intended.  Ultimately I got on far better with those in classes lower than me, even those in the lower classes.  The guys who didn't get 95% in maths or an A in history, who were often in trouble for scraps and fighting: these were the guys who were most accepting of my idiosyncrasies.

Sadly, some people don't grow out of that obnoxious period, who view their superior grades with little humility and a misplaced sense of entitlement.  Such is the case with the Colloquy Society, who are a community where only the best and brightest get in.  Best and brightest, meaning, those who have the highest IQ tests: this would exclude the likes of Charles Darwin, Richard Feynman and William Shockley from their illustrious ranks, seeing as they have above average, but not genius-level, IQ scores.

Reading their website just brings back those horrible memories.  But how did I come across this site?

Well, a few posts ago I was discussing Howard's rebuttal to Harold Preece regarding historical women, when Francisco asked me why the famous female polymath Hypatia of Alexandria wasn't included.  Curious, I went through REH's letters and stories: no sign of her I could find.  I then checked out the internet (where I found the Preece quote), but I also found this.  It's your typically snooty discussion of belief mixed with some genuinely insightful stuff, however, my eye was drawn to mention of "I always thought that was quite Freudian of Robert E. Howard."  What could this be?

LDL:   Not Thoth, thank Crom ... now that is a god to reckon with ... he has the biggest sword of anyone. (I always thought that was quite Freudian of Robert E. Howard. But then he was a little shrimp and " mama's boy " and after his mom died he offed himself.)

OK, first, can anyone name a story, letter, fragment, or document where Howard explicitly states Crom's sword was the biggest of anyone?  Anywhere?  Did he even mention Crom having a sword to begin with?  It can hardly be Freudian of Robert E. Howard if he never said anything of the sort to begin with.  What absolute nonsense coloured to play on the anti-Howardian prejudices of his fellow literati: the implication is that LDL thinks nobody with an IQ over 140 would ever read REH (indeed, I doubt he has himself), and that he thinks he can make things up with impunity.  Well, he can't.

Then there's "little shrimp."  I guess "LDL" and I have very different ideas on what a little shrimp is . 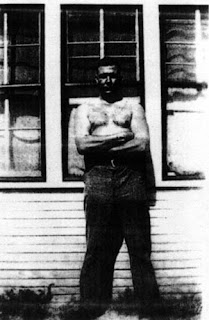 Yeah, look at that tiny dude!  Look at his bony mummy-arms, pencil-neck, pigeon-chest and weeny little face!  I bet he's never even seen a boxing match, let alone participated in amateur bouts, and he certainly wouldn't have an undefeated streak!

Then there's Mama's Boy.  I love how looking after your terminally ill mother when your father is away from home for weeks at a time in the middle of nowhere during the Great Depression equates to "Mama's boy."  Because, of course, Howard should've just abandoned his tuberculosis-ridden mother to her fate in pursuit of his dreams like a real man.  Of course, De Camp didn't exactly help matters, did he?

Finally, he "offed himself" going by the old nonsense of Howard being so emotionally crippled that he couldn't deal with life without Mommy.  I guess all those references to killing himself from the age of 16 and the high possibility of clinical depression are all to throw us off.  Le sigh.

So what is the Colloquy society?  Well, here's what it says on the main page:

Colloquy is, to the best of our knowledge, the first high-IQ society based entirely on the Internet. It is created as a forum for the collegial sharing of thoughts, experiences, and creative expression among people of superior intelligence.

I really can't say anything.  That says it all, doesn't it?  "High IQ" intelligensia who get basic facts wrong, and even make stuff up.  If ever there was proof that high IQ (incidentally, there doesn't seem to be any way of proving any of the contributors really have a high IQ) is no guarantee that you can't do or say stupid things, it's this.

Unfortunately, proliferating high-IQ groups have all too often failed to satisfy criteria for true intellectual society, where thoughtful consideration of ideas would banish ad hominem rantings of bigots while nurturing free and civil discussion.

Yeah, if being intellectual means being arrogant, patronising, and disdainful of little things like "facts," "courtesy" and "accuracy" I'd rather stay in the doldrums of double digits IQ.  Now, I can see some criticism coming my way - "but Al, don't you do this yourself: aren't you dismissive of opinions different from your own?"  And you'd be right, I am thoroughly disdainful and can be relentless in my criticisms.  However, there's a difference: my opinions are backed up by fact and reasonable hypothesis.  My opinions on Howard are based on up-to-date research and critical thinking.  LDL's opinions are not only based on false, decades out-of-date premises: they're done in such a way that gives the impression LDL knows the subject fairly intimately.  I could blame the Lancers for this, but it doesn't reflect well on geniuses to make offhand off-colour remarks like this.

It reminds me of a Robert E. Howard quote...

I understand that a certain class of the intelligentsia delight in lancing less sophisticated individuals with their supposedly lacerating wit, but I can assure you that none of them ever tried that on me. Any one who deliberately starts out to bait me needs something besides mere intellectual superiority. I have tried to make it plain that I have no indiscriminate prejudice against true intellectuals, and it is true that I regard even the would-be intellectuals with tolerance, or at most only amuse- ment. I have been rather disgusted with some of them, but the feeling never amounted to actual enmity. In fact, I’ve rather liked all I ever met, though some of them didn’t like me. My habits and opinions seemed to shock most of them to their quivering souls - I am speaking here of the intelligentsia, or baby-intellectuals, as they might be called.

The baby-intellectuals of the Colloquy Society have a lot to learn about Robert E. Howard. It would be nice if they tried, but frankly, I doubt they'd deign him to be worth the effort.  I'd love to be proven wrong, of course: it'd be nice if someone from Colloquy came around and said "we're not all swaggering blowhards who shoot from the hip on subjects we know nothing about": the gauntlet is thrown down.  Come on guys, give me reason to have hope for intellectuals.

Am I taking this all to seriously?  Surely you jest: Robert E. Howard is Serious Business.
Uttered by Taranaich at 05:19