The Robert E. Howard Reader is coming at last 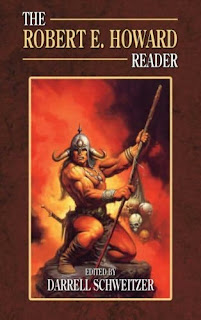 Over at REH: Two-Gun Raconteur, Damon has alerted Howardom at large to the long-gestating Darrel Schweitzer critical anthology, The Robert E. Howard Reader.

“The Everlasting Barbarian” by Leo Grin

“The Art of Robert Ervin Howard” by Poul Anderson

“What He Wrote and How They Said It” by Robert Weinberg

“Barbarism vs. Civilization” by S.T. Joshi

“Return to Xuthal” by Charles Hoffman

“King Kull as a Prototype of Conan” by Darrell Schweitzer

“How Pure a Puritan Was Solomon Kane?” by Robert M. Price

“A Journey to Cross Plains” by Howard Waldrop

“Weird Tales and the Great Depression” by Scott Connors

“After Aquilonia and Having Left Lankhmar: Sword & Sorcery Since the 1980s” by Steve Tompkins

As Damon says, it's unlikely to reach the lofty heights of The Dark Barbarian or The Barbaric Triumph, but it's still great to have another critical anthology dedicated to Howard. That said, I see this being about as controversial as the last critical anthology.

“Robert E. Howard: A Texan Master” was not very well received, and ripped to shreds by Rob Roehm in V4n2 of The Cimmerian, so it's a shame to have this instead of "Conan: American Phenomenon," Moorcock's far superior essay that serves as the introduction to Conan the Phenomenon. The seemingly eternal controversy around S.T. Joshi has me very, very nervous about "Barbarism vs Civilization," though he's apparently come around in the past few years. Gary Romeo is always the lone voice of dissent in Howardom, but if "Fictionalizing Howard" is about the many horrible inclusions of the man in fiction (i.e. "Gilgamesh in the Outhouse") then it might well be surprisingly agreeable.  Schweitzer himself is often at the centre of scraps in The Cimmerians' Lion's Den (according to Damon, this was first posted at the L. Sprague de Camp Yahoo group - yes, that one) so his essays will certainly be the source of discussion.

That said, there's a lot to look forward to from a historical point of view.  Moorcock, Poul Anderson and Fritz Leiber add some Sword-and-Sorcery legend to proceedings, and the inclusion of De Camp would offer an example of the state of Howard scholarship back in the day. Plus you have the redoubtable Howard scholars, and an essay by Steve Tompkins to boot.  I always loved the look of the Wildside Press Howard collections, so it's really cool that this is keeping in line with them.  I'll keep an eye out for this one.

EDIT: It turns out that the above cover is no longer the one they're going for. Damon has kindly informed me and directed me to the correct version: 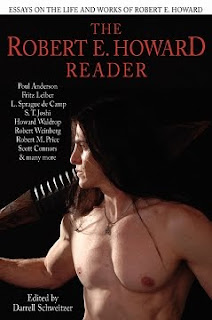 I dunno, folks. I just liked the first cover better, so that might account for my reluctance. Still, if that muscular chap's meant to be Conan, where's his hairy chest? And what's that thing he's holding? It looks like some sort of Micronesian, Australian Aboriginal, or maybe African war club, but I'm damned if I can identify it.
Uttered by Taranaich at 20:59