Red Sonja gets back to the mail byrnie

So says Eric Trautmann, who's taking over Red Sonja. 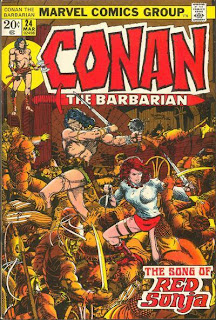 Well technically he says "mail tunic," but he's clearly referring to the original iteration of Red Sonja in the early days of Marvel's Conan the Barbarian.

Newsarama: Eric, we talked before about how you're dealing with a Vampirella that isn't scantily clad. How are you approaching Red Sonja?

Eric Trautmann: It's the same answer as what I said for Vampirella. I'm probably going to annoy the fans of these characters a little because I insist on putting clothes on them.

But with Red Sonja, there's a distinctive reason why I put her into the chain mail tunic. It cements it to a certain period in her timeline. For anyone who is familiar with that era of the character, they'll automatically expect a certain tone, and I intend to play with that.

I also think people that are familiar with my writing know I don't do the type of stories that go for titillation. That doesn't mean I'm going out of my way to keep her covered. It just means that, when I do things like that, like if I have a nude scene, there's going to be a purpose to it besides just saying, "Wow, look. She's real purdy." I want it to have a story impact.

Nrama: Red Sonja has a pretty convoluted continuity. Do you have to understand her past to read this story?

Trautmann: Not at all. I got to do a story about whatever I wanted to do, and because I wasn't too caught up on current continuity, I asked if I could go back to her beginning. So the story is pretty up-front and easy for new readers, but people who've read Red Sonja before should enjoy this take on her too.

The story takes place fairly early in her career, and there are some clues in her costuming and other things that place her somewhere before the old Roy Thomas/Barry Windsor-Smith storyline, "Song of Red Sonja," with the chain mail tunic. So it's early in her mercenary days.

There was a lovely gap there that hadn't really been filled, and it was suited to the kind of stories I enjoy telling. I seem to have carved out a niche as a guy who writes military stuff. So they wanted clashes between armies, and since Red Sonja's a mercenary, I could put her into this great place where she has contacts where multiple armies clashing in battle. I figured I'd have the illustrator going nuts drawing all day.

I foresee two reactions: the people going "you can't change her costume, it's part of her character," and the others saying "about time, Red Sonja should be dead a hundred times now with the little armour she has."  Both sides have a point, and Big Red isn't the only comics heroine to get a controversial costume change.  I'm not going to get into the mail bikini debate, save to note that though I'm not a fan in this instance, in the comics, she's wearing more armour than Conan, and most of the men she fights.  A lack of armour does not mean complete vulnerability, as the many naked warriors of history attest.  Man, but it must chafe... 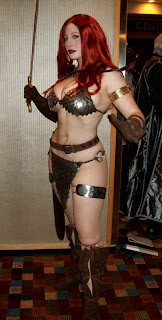 Wait, I totally got into the mail bikini debate, didn't I?  Sorry.

Anyway, this means that it's effectively set in the Conan the Barbarian time frame, though obviously before meeting Conan.

Nrama: What can you tell us about the story you're telling in your four-issue debut on Red Sonja?

Trautmann: Like I said, I wanted to go back fairly early in Sonja's history, prior to "Song of Red Sonja." In that period, Sonja was a mercenary and thief, which forms the spine of the story.

Sonja is a captain in a mercenary army, an army hired by a rebellious prince seeking to overthrow the legitimate king of Argos; predictably, this uprising is on the verge of being crushed, and -- in a last ditch effort to save the day -- Sonja and her men are dispatched on a desperate mission.

When the story opens, Sonja is on this last-ditch mission for her general, as all of the armies of the kingdom are riding down upon them to crush this insurrection. But unbeknownst to the people she's commanding, there are some things going on behind the scenes of this mission.

Of course, Sonja being Sonja, she has her own agenda, as do the various armies riding into the field of battle to seize territory in the chaos of the attempted coup. To quote Tony Curtis in one of my favorite films of all time, "In confusion, there is profit."

It's definitely more of a mercenary Sonja. She's a little harder in edge than we've seen her in awhile.

I guess a good touchstone for the kind of story that it is would be the Jim Owsley series of Conan the Barbarian stories from Marvel, back in the late '80s/early '90s. It was a similar set-up, where Conan was a mercenary general who had a team of guys with him. It was his first brush with having a crown, and it was a wonderful story. It was eye-opening to me. I was 14 or 15 at the time, and I was amazed at the change in his outfit and how he worked with this ensemble cast. I always remembered that and loved it. So this is that kind of story. Obviously, I'm not doing what Jim Owsley did, but it's in the same type of story.

It's not just her. She has to interact with people around her who have all these competing agendas that will ultimately end up in armies all riding into the same location to have a showdown.

I confess to not having read the Jim Owsley Conan run: perhaps one of my faithful Lost Souls could illuminate?

As ever, I'm very cautious about what Trautmann does with Argos and Sonja's mercenaries.  For all the flak I give Dark Horse, they can't compare to the nonsense Dynamite's cooked up - Hyrkanians that look like Monty Python peasants, bringing in Claw the Unconquered, Fool's Doom.  That said, I love the idea of Sonja being "out for herself," and multiple factions working against each other.  That's pretty Howardian, if I do say so.

Nrama: Will we recognize any of these other characters from that time frame in Red Sonja, or have you created a new cast?

Trautmann: They're all new. One of them is a hunter who is sort of our Wolverine in the story. He owes a debt of some time to Sonja that I'll deal with in the epilogue issue. There are a couple of Hyrkanian horse soldiers. And a simple scholar named Rogatino, who decided he liked women and sword-fighting better.

The name Rogatino is kind of an homage to the Red Sonja character herself. Robert E. Howard had written a historical story where the heroine protagonist was Red Sonya with a "y," not a "j," of Rogatino. That was the character's name. So they let me name one of the characters after that.

Hmm. Not sure if I dig the Rogatino reference: the further away one keeps Red Sonja from Red Sonya, the better. Doesn't the world have enough Wolverines?  It's a nice gesture on Trautmann's part, though. Also, Hyrkanian horse soldiers - about bloody time. I'm sick of seeing the Hyrkanians as faux-Medieval peasants.

Now, on the one hand, I think it's cool that Trautmann's going for a less overtly cheesecake interpretation of Red Sonja. I love Sword-and-Sorcery heroines, and I love cheesecake, but I prefer my Sword-and-Sorcery cheesecake outside of "realistic" realms like the Hyborian Age and confined to the over-the-top fun of, say, Heavy Metal.  Plus it adds to the misconception that Howard was responsible for the mail bikini.  Crom knows I've been complaining about that long enough. 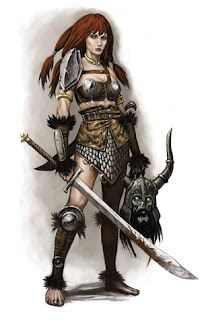 Yet at the same time... this is still Red Sonja.  She's still the rape victim who gets her sword skills through divine gift, who can only lie with the man who effectively recreates the circumstances of her most traumatic experience.  That, to me, is far more of a problem than the mail bikini. You can dress her cap-a-pie in plate armour forged in the flaming mountains of Khrosha, and it won't change the fact that she isn't a skilled swordswoman because she worked hard and trained well, but because a goddess took pity on her being a victim of men, and gave her superpowers that rob her of her sexuality.  It's a complete crock, and the implication is that no woman could truly be a she-devil with a sword that could compete with men, despite there being plenty of evidence to the contrary.

There's every possibility that Troutmann's going to make this story as separate from the main continuity of Red Sonja as possible, which might mean there's still a bit of mystery to her character. Ultimately, though, I don't know if I can muster enough interest even to see a Red Sonja that hearkens more to her inspiration.  I'd love to think that a simple thing like changing her costume would be enough, but the problems reach far deeper.  Besides, will Trautmann's writing be strong enough to stop regular Sonja fans - which certainly exist - from feeling excluded?  The promise of sex scenes and "context" for nudity strikes me, unfortunately, as an attempt to "stick nudity in" with the excuse that it's important for the narrative.  Who knows, maybe it will be.

If nothing else, though, it shows that Trautmann's more serious about fleshing out Sonja beyond a simple costume change.  Hopefully his background in military stories will result in a Red Sonja who the She-Devil of Rogatino would recognize. 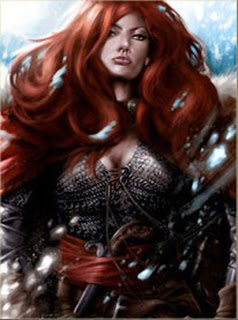