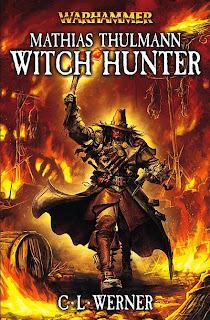 I fairly enjoy Warhammer.  There's something about the gloriously over-the-top, terribly British sense of excess in the Grim Dark Future, very much like 2000 A.D.'s legendary Judge Dredd.  Of course, after Warhammer 40,000 became a smash hit, its rustic counterpart - Warhammer Fantasy - came about.  I became more a fan of the unusual races like the indigenous Lizardmen, the grotesque Skaven, and the gothic Vampire Counts, rather than the traditional fantasy races, like the Orcs and Elves and Dwarves. That said, the Empire has its charms, particularly the not-very-subtle caricature of the inquisition, and their requisite counterpart to Matthew Hopkins, the Witch Hunter.

The omnibus starts with an introduction by Mr Werner himself where he talks about Mathias Thulmann being his first character created for Black Library, his love of halloween, and the influences of Vincent Price's Anthony Hopkins and Robert E. Howard's Solomon Kane when creating Thulmann.

Oh ho!  (Presumably Lord of the Night, the poster, means Matthew Hopkins of Witchfinder General, as opposed to Anthony Hopkins of such films as Magic and Shadowlands.)

I'm going to have to track this book down now.
Uttered by Taranaich at 00:13