I thought I'd link to a very interesting review of Solomon Kane by Robert E. Howard Forumer Taran, who comments here as onelastsketch.  It's highly enlightening.

I wrote earlier that I would deliver a more in-depth review of the Solomon Kane film, and I suppose I'll remain a man of his word. Some spoilers to follow.

We already know Bassett is a big fan of Michael Moorcock, and as I mentioned before, it shows. As a sword & sorcery movie, the film is excellent, but as a Howard adaptation, it leaves much to be desired, mostly because of the approach. Many of Moorcock's S&S yarns are insufferably shallow, entertaining on the skim but not much below the surface...the mature themes, while weighty in some instances (particularly in Elric), tend to lack subtlety. And this was the approach Bassett took with Solomon Kane: spin it out like a Moorcock eternal champion story.

The major influence here, however, seems to be The War Hound and the World's Pain, which, at least, is a Moorcock work deserving of praise--probably his best. Bassett's character warping only fits with a simple skim-reading of Howard's Kane stories, however. The atmosphere is there, the violence, the sense of adventure. But rather than encoding themes subtly beneath the adventure, Bassett felt the need to make them overt, and the ones he chooses seem to miss the point entirely.

The abuse of religious imagery in this film is exhausting not only because it paints a universe that doesn't really fit the one in the Kane stories, but also because Bassett doesn't seem to really understand the religious period he's depicting. Not really surprising, as Bassett is an atheist--making this an atheist's misplaced understanding of a 16th/17th century Christian worldview. No difference here between Catholicism, the Anglican Church, Puritanism, we're not even sure if Pete Postlewait's family managed to convert Kane and can only assume he's gone Puritan thanks to his change of garb. Thus, we get Christian symbolism and imagery, such as Kane's crucifixion, the grim reaper, & so forth, but played in a bald-faced manner and sometimes jarring with the context (Why is there a monastery in England? Not from lack of research, but Bassett is mixing symbols I don't quite think he understands). The blending seems, in part, to stem from a Law & Chaos thing here.

I'm gonna work with the von Back comparison: both Kane & von Beck start out as amoral characters, both owe their soul to the devil, both receive a "wake up call" (though Beck gets it from the devil itself) that their actions have damned them, and both go on quests to redeem their souls. In both, God & Christianity (as a whole) = Law, the devil=chaos. Malachi's soldiers seem like the chaos-corrupted villains in Moorcock's work, the Satanic transformer at the end looks like one of Moorcock's generic chaos creatures. There's a big reveal at the end where, I think, Solomon Kane seemingly becomes the Eternal Champion by discovering his purpose. Maybe von Beck is more jaded with the idea, but Corum ain't. There are hints in the film that various religions are just a face for a wider conflict between good & evil (the good witch who magically cures the big holes in Kane's palms), or, maybe, Law & chaos. I got the feeling watching this that the Solomon Kane I know was getting strained through a Moorcock sieve.

On the other hand, there are some things Bassett mercifully avoided. Kane's not hopping through the multiverse. There's no inevitable Moonglum or other sidekick to join the Eternal Champion in his quest. But there is a typically Moorcockian muddled ending, where you end up having to supply the answers. How did Kane defeat the Satanic transformer? The slow-mo emphasis on Malachi's blood hitting the mirror makes it clear to me, at least, that God ain't helping Kane at all--he's broken the spell. But maybe a lesser creature (like, hmmm, the Devil's Reaper) stalking in the background would have clarified that fact. The monster's just distracting, as is, and other elements are just left hanging. If a good many people thought there's deux ex machina at the end, it's Bassett's fault for not providing enough other elements to really explain what the heck is going on. It's just magic, after all.

I'm not sure how conscious this stuff was on Bassett's part. Part of what saved the film for me was that, unlike Milius, Bassett still wanted to make an honest-to-God S&S film. Maybe a skim-reading of the Kane stories to get to it, but he at least understood the genre in general as the fans like it when reading it, and not as studio companies think when trying to serve it to a mass audience. The darkness, the grit, the blood is all there. It's a serious approach to the subject, but again, it's also an approach with little depth: the read-it and toss-it of Moorcock's endless eternal champion series. What depth there is gets lost in the need to drive forward the plot.

So, final thoughts: loved the film, Bessett likes Howard, but he didn't give the stories the fair shake and in-depth reading they should get, which led to this: an amalgam of other S&S stuff, mainly Moorcock, tossed into a blender with Howard. At the beginning of the project, I was genuinely scared that Kane was going to hunt down a sorcerer to avenge the murder of his family (and, it turns out, the planned 1999 movie with Christopher Lambert would've been just that), so the final product far outstripped initial expectations after all. There's demons to kill and an innocent girl to be saved, and a very interesting (but criminally underused) delving into Enochian magic. It's the best Howard "adaptation" I've seen so far, but frankly, that ain't saying much.

I haven't read The War Hound and the World's Pain, but the similarities Taran points to are startling.  This just makes me even more excited for Bassett's possible Moorcock involvement, if he's working from Moorcock's best work.

I recommend you all mosy over to Taran's blog, One Last Sketch: the home of his webcomic "The Lurking Humour," which includes musings on Gods on the Internet, cogitations on Victorian Gynecology, and The Ultimate Fusion of Old English and Marvel Comics. This one is my favourite. 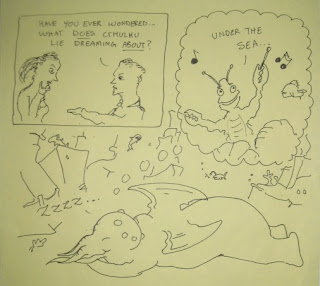 Cthulhu dreaming of a Jamaican crab.  D'aaawww.
Uttered by Taranaich at 00:01